As a science teacher, I get kind of annoyed with the media sometimes.

The misleading headlines are bad enough.  I remember seeing headlines when interferon was discovered that said, "Magic Bullet Against Cancer Found!" (it wasn't), and when telomerase was discovered that said, "Eternal Life Enzyme Found!" (it wasn't).  Add that to the sensationalism and the shallow, hand-waving coverage you see all too often in science reporting, and it's no wonder that I shudder whenever I have a student come in and say, "I have a question about a scientific discovery I read about in a magazine..."

But lately, we have had a rash of announcements implying that scientists have overcome heretofore insurmountable obstacles in research or technological development, when in fact they have done no such thing.  Just in the last two weeks, we have three examples that turn out, on examination, to be stories with extraordinarily little content -- and announcements that have come way too early.

The first example of premature annunciation has hit a number of online news sources just in the last few days and has to do with something I wrote about a year and a half ago, the Alcubierre warp drive.  This concept, named after the brilliant Mexican physicist Miguel Alcubierre, theorizes that a sufficiently configured energy source could warp space behind and ahead of a spacecraft, allowing it to "ride the bubble," rather in the fashion of a surfer skimming down a wave face.  This could -- emphasis on the word could, as no one is sure it would work -- allow for travel that would appear from the point of an observer in a stationary frame of reference to be far faster than light speed, without breaking the Laws of Relativity.

So what do we see as our headline last week?  "NASA Unveils Its Futuristic Warp Drive Starship -- Called Enterprise, Of Course."  Despite the fact that the research into the feasibility of the Alcubierre drive is hardly any further along than when I wrote about in in November 2012 (i.e., not even demonstrated as theoretically possible).  They actually tell you that, a ways into the article:


Currently, data is inconclusive — the team notes that while a non-zero effect was observed, it’s possible that the difference was caused by external sources. More data, in other words, is necessary. Failure of the experiment wouldn’t automatically mean that warp bubbles can’t exist — it’s possible that we’re attempting to detect them in an ineffective way.

But you'd never guess that from the headline, which leads you to believe that we'll be announcing the crew roster for the first mission to Alpha Centauri a week from Monday.

An even shorter time till anticlimax occurred in the article "Could the Star Trek Transporter Be Real? Quantum Teleportation Is Possible, Scientists Say," which was Boldly Going All Over The Internet last week, raising our hopes that the aforementioned warp drive ship crew might report for duty via Miles O'Brien's transporter room.  But despite the headline, we find out pretty quickly that all scientists have been able to transport thus far is an electron's quantum state:


Physicists at the Kavli Institute of Nanoscience at the Delft University of Technology in the Netherlands were able to move quantum information between two quantum bits separated by about 10 feet without altering the spin state of an electron, reported the New York Times.

In other words, they were able to teleport data without changing it. Quantum information – physical information in a quantum state used to distinguish one thing from another --was moved from one quantum bit to another without any alterations.

Which is pretty damn cool, but still parsecs from "Beam me up, Scotty," something that the author of the article gets around to telling us eventually, if a little reluctantly.  "Does this mean we’ll soon be able to apparate from place to place, Harry Potter-style?" she asks, and despite basically having told us in the first bit of the article that the answer was yes, follows up with, "Sadly, no." 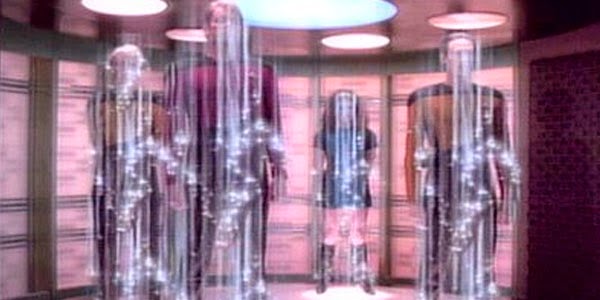 Our last example of discoverus interruptus comes from the field of artificial intelligence, in which it was announced last week that a computer had finally passed the Turing test -- the criterion of fooling a human judge into thinking the respondent was human.

It would be a landmark achievement.  When British computer scientist Alan Turing proposed the test as a rubric for establishing an artificial intelligence, he turned the question around in a way that no one had considered, implying that what was going on inside the machine wasn't important.  Even with a human intelligence, Turing said, all we have access to is the output, and we're perfectly comfortable using it to judge the mental acuity of our friends and neighbors.  So why not judge computers the same way?

The problem is, it's been a tough benchmark to achieve.  Getting a computer to respond as flexibly and creatively as a person has been far more difficult than it would have appeared at first.  So when it was announced this week that a piece of software developed by programmers Vladimir Veselov and Eugene Demchenko was able to fool judges into thinking it was the voice of a thirteen-year-old boy named Eugene Goostman, it made headlines.

The problem was, it only convinced ten people out of a panel of thirty.  I.e., 2/3 of the people who judged the program knew it was a computer.  The achievement becomes even less impressive when you realize that the test had been set up to portray "Goostman" as a non-native speaker of English, to hide any stilted or awkward syntax under the guise of unfamiliarity.

And it still didn't fool people all that well.  Wired did a good takedown of the claim, quoting MIT computational cognitive scientist Joshua Tenenbaum as saying, "There's nothing in this example to be impressed by... it’s not clear that to meet that criterion you have to produce something better than a good chatbot, and have a little luck or other incidental factors on your side."


And those are just the false-hope stories from the past week or so.  I know that I'm being a bit of a curmudgeon, here, and it's not that I think these stories are uninteresting -- they're merely overhyped. Which, of course, is what media does these days.  But fer cryin' in the sink, aren't there enough real scientific discoveries to report on?  How about the cool stuff astronomers just found out about gamma ray bursts?  Or the progress made in developing a vaccine against strep throat?  Or the recent find of exceptionally well-preserved pterosaur eggs in China?

Okay, maybe not as flashy as warp drives, transporters, and A.I.  But more interesting, especially from the standpoint that they're actually telling us about relevant news that really happened as reported, which is more than I can say for the preceding three stories.