Sometimes it seems to me that a significant fraction of the media is not even trying to be accurate any more.

Oh, I know there are responsible reporters.  But ye gods and little fishes, some of them are awful.

Take, for example, Mike Hallowell's piece last week in the Shields Gazette, a newspaper out of Sunderland, England.  The article's title was -- and I swear I'm not making this up -- "Was Neanderthal Shot by a Time Traveler?"

In this bizarre little piece, we find out that in 1922, some archaeologists found a Neanderthal skull in Broken Hill, Southern Rhodesia (now Zimbabwe).  This put me on alert right away; Neanderthals didn't live in Africa, they were a species confined entirely to Europe (if they constitute a distinct species at all, a point still being debated).

But that was only the beginning of the lunacy in Hallowell's article.  Because he claimed that this "Neanderthal skull" had a bullet hole in it.  Here's a direct quote:


On the left side of the cranium was a small, perfectly round hole. At first it was assumed that it had been made by a spear, or other sharp implement, but further investigation proved that this had not been the case.

When a skull is struck by a relatively low-velocity projectile – such as an arrow, or spear – it produces what are known as radial cracks or striations; that is, minute hairline fractures running away from the place of impact.

As there were no radial fractures on the Neanderthal skull, it was unanimously concluded that the projectile must have had a far, far greater velocity than an arrow or spear. But what?

In short, whatever had hit the Broken Hill Neanderthal on the left side of his head had passed through it with such force that it had caused the right side to explode.

He then quotes René Noorbergen, author of Secrets of the Lost Races, who said, "This same feature is seen in modern victims of head wounds received from shots from a high-powered rifle.  The cranial damage to Rhodesian Man’s skull could not have been caused by anything but a bullet." 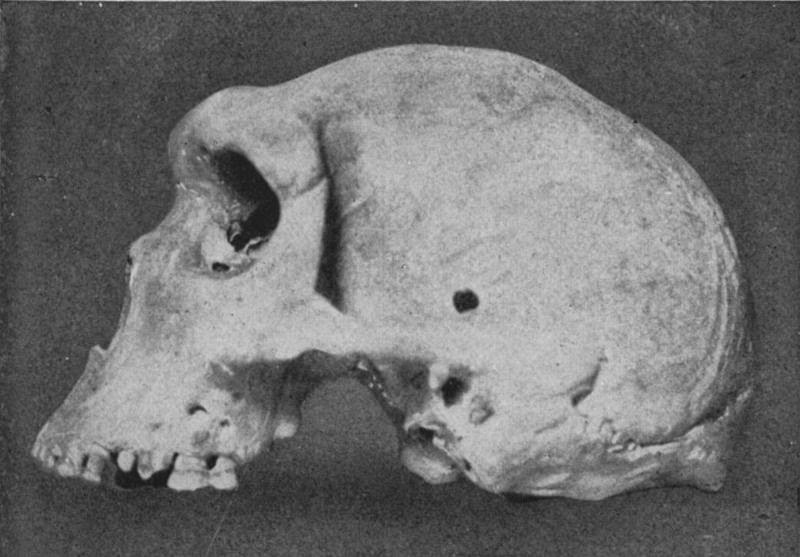 The skull of "Rhodesian Man," showing the alleged entry wound [image courtesy of the Wikimedia Commons]

So, Hallowell concludes, the bullet came from the gun of a time traveler who had gone on a "trans-temporal hunting expedition."

Righty-o.  Because that makes sense.  It took me all of five minutes on Google to find out that this claim is Grade-A Unadulterated Bullshit.  Over at the wonderful blog Bad Thinking, we find out that everything about Hallowell's article is... wrong.

Rhodesian Man was discovered in 1921, not 1922.  The skull, as I realized right from the outset, wasn't a Neanderthal, it was Homo rhodesiensis, a species that is thought to be the common ancestor of both Neanderthals and modern humans.  The "bullet hole" actually shows signs of partial healing, and therefore the skull's owner survived whatever caused it.  Scientists (who, unlike Hallowell, actually know what they're talking about) suspect it was caused by a bacterial infection.

Worst of all, the opposite side of the skull is intact.  There's no exit wound, no part of the skull that's "blown away."  The unnamed archaeologist quoted in Hallowell's article either never actually looked at the right side of the skull, or more likely, he is as nonexistent as the rest of the evidence in this claim.

I suppose there's always been lousy, low-standards journalism, but because of the internet such foolishness now can travel much further than ever before.  This means it's even more important to insist on accuracy in reporting, and being willing to accept nothing but excellence in every media source.

I know that media also exists to entertain, and there's nothing wrong with amusing speculation, whose aim is only to make us scratch our heads a little.  But before Hallowell even got to the speculation part of the article, he misled the reader with outright falsehoods multiple times, and that is inexcusable.

As I've said more than once, I am all for keeping in mind our biases and assumptions.  I have a bias always to look for the natural explanation that is consistent with what we currently know of the laws of science.  People who accept the existence of the paranormal have a different set of biases.

But neither viewpoint benefits from liars and hoaxers, who serve no other purpose than to muddy the waters, making actual understanding less likely for everyone.
Posted by Gordon Bonnet at 4:18 AM