For the latest reason that you should avoid being vaccinated, as long as you have zero understanding of science, we have:

The medical establishment puts nanobots into vaccines, which then eat your brain.

This, at least, is the contention of one Jim Stone, who runs a site called Environmental Terrorism.  And it turns out that the nanobot doesn't eat your whole brain, it just destroys the part of it that allows you to go to heaven:


(A) virus they are creating will attack the “God Center” of the brain and destroy it! He tries to sell it by saying that this will stop suicide bombers by people that believe in God but of course this is just the sell job.  He says it will take somebody that believes in God and turn them into a “normal” person!  So if you’re a Christian it will make you no longer believe in God and Jesus Christ which is your key to eternal life!  This is the pure evil that is the new world order government running the US!


There have been many reports about nanobots being developed that will destroy people. This report actually identifies that nanobot and what it is based upon. Once this nanobot is received via a tainted vaccine, it inserts DNA into your cells which instructs your own cells to produce more copies of itself and THAT is how it replicates. And it NEVER backs off, it simply orders your own cells to keep producing it until your cells die from being over worked doing exactly that. And it’s completely verified this thing came from a lab in 2007.

You have no idea how relieved I was when I read the last sentence, because I got the majority of my vaccinations before 2007.  Which, presumably, is why I still have a brain.

Who would do this evil stuff, you might ask?  And of course, the answer is:

The Jews.  But you probably already knew that.

I plan on asking my wife, who is Jewish, why she would do such a thing.  I mean, making me eat matzoh balls, which in my opinion taste like chicken-flavored play-doh, is one thing.  Infecting me with a microorganism that eats my brain is quite another.

Then Mr. Stone shows us a picture of the nanobot that does all of this nasty business: 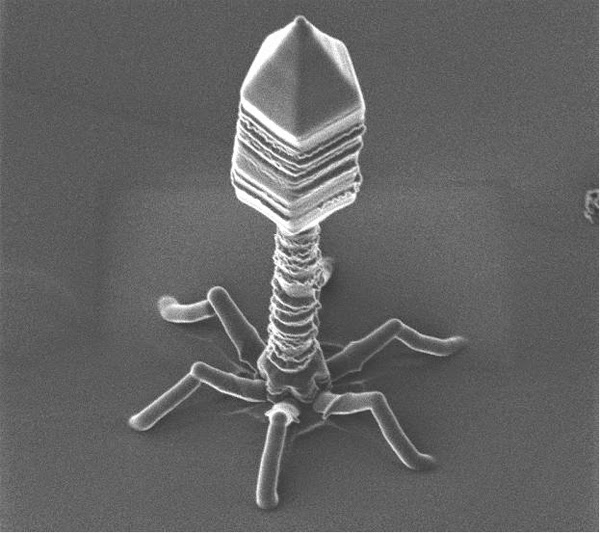 When I saw this, I said to my computer, and I quote:  "What the fuck?  That's a bacteriophage."

But this doesn't stop Mr. Stone.  He claims that this creature didn't exist prior to 2007, which will surprise the hell out of my AP Biology students because I've been teaching them about bacteriophages ("bacteria-eating viruses") since 1994.  It's also quite natural, and completely harmless unless you're an E. coli bacterium.

You'd think that an amount of research that's as microscopic as the virus itself would be sufficient to convince Mr. Stone that his claim is complete and utter horse waste.  Starting with the fact that it's called a "bacteriophage," and not a "brainophage."  But no.  Not only is this thing going to turn you into an irreligious zombie, you can tell it's a Jewish nanobot because of its shape:


(T)heir little hexagonal leg patterns and star of david phage bodies (are wreaking) havoc on the rest of mankind.  And on that note, I may have stated above that the reason for re engineering a phage to do the job rather than a known infectious virus would be to make good and sure it could not spread to other people in the wild, but I can´t help but imagine that such a profoundly Jewish looking micro organism would not be selected simply for its appearances.

A passage which, I suppose, demonstrates why Mr. Stone himself is immune.  If you don't have a functioning brain, that would presumably make the Jewish brain-eating nanobot virus less interested in infecting you.

At the end, we get the coup de grâce:


(E)verybody must make their own decisions about vaccines.  I’m not a doctor and cannot give you medical advice.  All I’m saying is that evil men control the medical system and they already have a virus that can change your brain so you no longer believe in God!

So, there you have it.  The least plausible reason yet that the anti-vaxxers are suggesting that you not get vaccinated.  At least it's more fanciful than Jenny McCarthy and her hand-waving "vaccines cause autism" nonsense.  Given a choice between Jenny McCarthy and brain-destroying nanobots, I'll take my chance with the nanobots.
Posted by Gordon Bonnet at 2:43 AM