A miscalculation of scale

In the first pages of Stephen King's book The Tommyknockers, a woman out walking her dog in rural Maine stubs her toe on an object protruding from the ground, and when she kneels down to see what it is, she sees that it is a curved bit of metal that can't be pried loose.  It seems to extend indefinitely as she digs away the loose soil around it.

It turns out to be [spoiler alert] the upper edge of an enormous spaceship that crash landed on Earth millions of years ago, embedding itself nose-downward, and eventually being buried by geological processes until only a little bit of it was above ground.

Kind of an interesting mental picture, isn't it?  A spaceship collides with Earth, only to be rediscovered by archaeologists or paleontologists (or random people walking their dogs) ages later.  It does, however, bring to mind Neil deGrasse Tyson's comment about the Roswell incident: "A super-intelligent alien species knows how to cross the galaxy, but then they can't even land the damn spaceship?  If they're that incompetent, maybe they should just go home."

I bring all this up because of a recent discovery in Russia.  Some coal miners, working at a mine in the Kuznetsk Basin in Siberia, unearthed a strange object that they claim is an extraterrestrial spacecraft.  Boris Glazkov, who found the object, said, "have to say it wasn't hard to see as it was really distinctive and large.  I've never seen anything like this object, which is obviously not natural, out here in the middle of nowhere before.  It is a real mystery."

The Kuzbassrazrezugol Mining Company, Glazkov's employer, confirmed discovery of the object, saying it was discovered at a depth of forty meters.  And everyone associated with the find is in agreement; what we have here is a crashed flying saucer.

So without further ado, let's take a look: 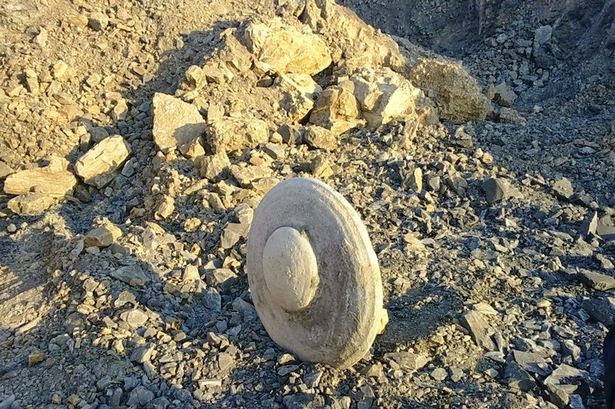 Pretty strange, eh?  You can see why I thought of The Tommyknockers.  Imagine this thing making a fiery plunge through the atmosphere, carrying its panicked alien crew hurtling toward the Earth, then burying itself deep in the ground, killing all that were aboard.

But then the object's discoverers provided a second photograph, one that gave us perhaps a little more information than they intended: 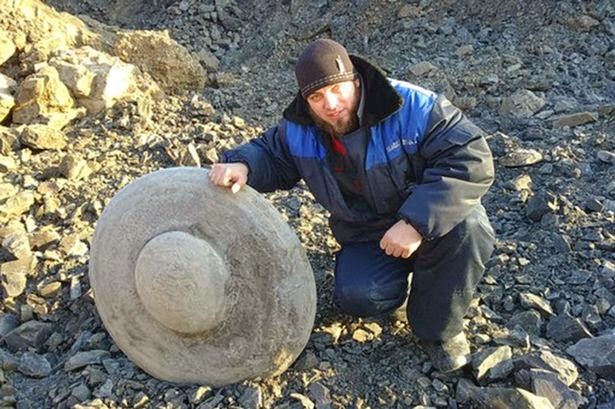 And this reminded me of a second book, The Hitchhiker's Guide to the Galaxy by Douglas Adams.  In particular, I recalled a passage about a pair of alien races, the Vl'Hurg and the G'gugvuntt, that wanted to launch an attack on Earth:


Eventually of course, after their Galaxy had been decimated over a few thousand years, it was realized that the whole thing had been a ghastly mistake, and so the two opposing battle fleets settled their few remaining differences in order to launch a joint attack on our own Galaxy...

For thousands more years the mighty ships tore across the empty wastes of space and finally dived screaming on to the first planet they came across - which happened to be the Earth - where due to a terrible miscalculation of scale the entire battle fleet was accidentally swallowed by a small dog.

So the miners who discovered this thing must believe that alien races are really tiny, if that's their spaceship.  Makes you wonder what we've been so afraid of, all this time.  If the aliens show up, waving around their itty-bitty laser pistols, we could just step on 'em.

And of course, there's a completely natural explanation for this thing.  It's what's called a "concretion" -- a symmetrical glob of sedimentary deposits that have become cemented together.  They can look pretty peculiar: 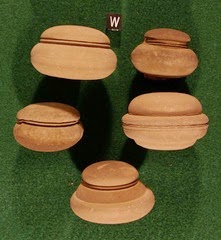 But that doesn't mean they're evidence of aliens.

Also, if this was a "flying saucer," wouldn't it be made out of something other than rock?  But maybe this was a Stone Age spaceship.  Maybe instead of laser pistols, the little aliens inside brandished clubs and flint knives.

Of course, we could still step on 'em.

So that's our latest non-evidence for aliens out of Siberia.  Kind of a pity, really.  It would have been cool if it had been real.  However, I'd prefer it if such a discovery wasn't followed by what happened in The Tommyknockers.  Without giving away any more of the plot, let me remind you that it's a Stephen King novel.  So suffices to say that Bad Shit Happens.  So maybe we should all be glad that what the Russian coal miners discovered was just a big round rock.
Posted by Gordon Bonnet at 3:41 AM