A recurring question in ethics is how good (or at least average) people could have participated in the Nazi atrocities.  Didn't they recognize that what they were doing was wrong?  Because it is clear that many of the people who were caught up in the Nazi fervor were from quite commonplace origins.  They were not, by nature, violent monsters who were out looking for evil things to do.

But they did swallow the horrific ideology.  They accepted the rhetoric that the Jews were inherently inferior, the myth of German exceptionalism, the fear-message that if the enemies of the Thousand-Year Reich weren't stopped, Germany would be overrun by people bent on its annihilation.

And it worked.  A few people recognized what was happening as it was happening, but far more capitulated, either standing by silent while the horrors were occurring or else actively helping the Nazi leaders.

Key to Hitler's ideology was the creation of the "Hitler Youth."  The idea -- and it was as perceptive as it was evil -- was to catch young people early, drill them with the message that Germany was (1) superior and (2) threatened.  Teach them that their first duty was to the Fatherland, that this came before anything, and that anyone criticizing Germany was wrong, trying to subvert the cause for his or her own wicked ends. 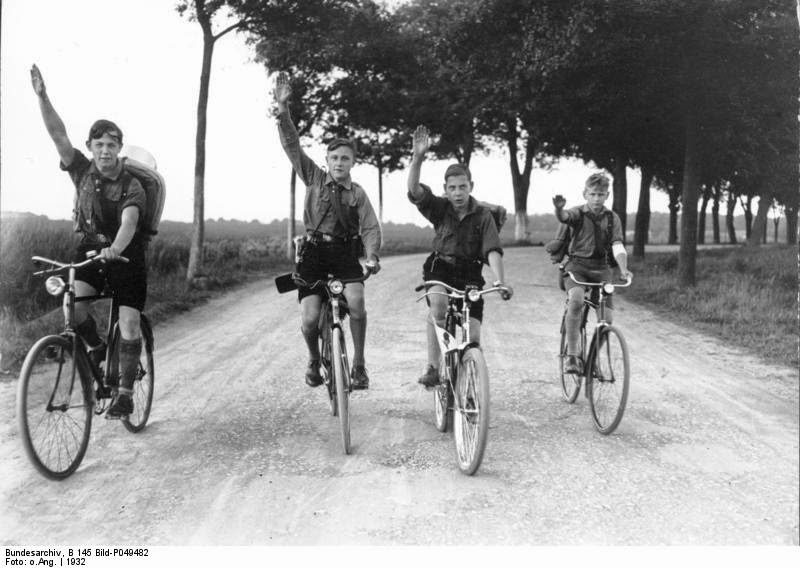 [image courtesy of the German Federal Archives and the Wikimedia Commons]


Everybody who has the right kind of feeling for his country is solemnly bound, each within his own denomination, to see to it that he is not constantly talking about the Will of God merely from the lips but that in actual fact he fulfils the Will of God and does not allow God’s handiwork to be debased... Whoever would dare to raise a profane hand against that highest image of God among His creatures [i.e. Germans] would sin against the bountiful Creator of this marvel and would collaborate in the expulsion from Paradise.

Which brings me directly to what is happening right now in Oklahoma.

You may not have heard about this; certainly the people responsible are not eager to have it become public knowledge.  But a committee in the Oklahoma legislature, led by Representative Dan Fisher, is looking toward eliminating AP (Advanced Placement) classes from Oklahoma high schools, saying that it is a violation of the state constitution to have a "mandated national curriculum."

But this is, at least in part, a smokescreen, because what is at the heart of this is not States' Rights issues.  It becomes obvious what the motivation is when you look at the first AP class that the committee has in its sights: AP US History.  And the argument for getting rid of AP US History is that it "eliminates the idea of American exceptionalism," focusing instead on "what is bad about America."

This demand that history courses whitewash our flaws comes from a retired history teacher and current activist and writer named Larry Krieger.  Krieger is incensed that the AP US History curriculum focuses on issues like slavery and the Japanese internment camps, instead of on areas where Americans have risen to higher ideals.  "Consider for a moment, from the beginning to President Obama’s recent declaration of why we had to wipe out ISIS, why do we send American boys and women into harm’s way to pay any price, bear any burden?" Krieger said in an interview.  "We do that because they are the defenders of liberty and freedom -- in short, our core values.  And so to scrub that out of the American narrative is a real egregious injustice.  People who call themselves liberals haven't really understood what... American exceptionalism means, and why it is so extremely important that it be taught to our kids.  Because what unites us as a people — we're not united by ethnic differences, religious differences, we're united by our core values."

Sound familiar?  It should.

Also unsurprising is the fact that it succeeded.  Yesterday the Oklahoma House Common Education Committee voted 11-4 to eliminate the teaching of AP US History in the state, "unless the College Board changes the curriculum."

Who wants to place bets on which AP course is next?  Hmmm, I wonder.  Could it be... biology?  Where students learn that humans evolved just like all other life forms on Earth, that human biological exceptionalism is a counterfactual myth?

Catch them while they're young.  Teach them that (1) they're superior, and (2) their way of life is threatened.  After that, you can accomplish whatever you want.

It's funny.  Every time I think I can't become more appalled at the direction that the oversight of public education is going, the powers-that-be outdo themselves.  They're becoming more overt about it, though; let's turn children into little factoid-spewing machines, meeting the benchmarks and rubrics and skill sets, and (above all) toeing the party line.  For heaven's sake, don't give them autonomy, values clarification, critical thinking skills.  Teach them not only what they're supposed to know, but what they're supposed to believe.  Label any push to educate students in how to perform critical analysis (even of their own country's leaders) as an "egregious injustice" designed to undermine our "core values."

Can't have people thinking America has flaws, after all.

Don't get me wrong.  When I look at the alternatives, I'm damn glad to be an American.  I would fight hard to protect what we have here.  But there's a difference between being proud of our country and thinking our country can do no wrong, believing that anyone who takes a good hard look at our past (and present) failings is trying to destroy our way of life.  What happened to the concept that clear-headed, rational analysis of history prevents us from making the same mistakes over and over again?

Better, apparently, to paint our ancestors as blameless, to spin the myth of American exceptionalism, so that any blow to the edifice, however justified, is looked upon as a dire threat.

It puts me in mind of a quote by Voltaire that I have above the whiteboard in my classroom:  "Those who can make you believe absurdities can make you commit atrocities."
Posted by Gordon Bonnet at 2:52 AM