So now apparently it's a thing amongst the devoutly religious not only to believe that evolution is false, but that dinosaurs never existed.

I'm not making this up.  According to Chris Matyszczyk over at CNet, there's a whole movement within Christian fundamentalism to "disprove the existence of dinosaurs," and, especially, to stop children from being exposed to information about them.

There's a group, apparently, called Christians Against Dinosaurs, and Matyszczyk investigated them, initially thinking that they had to be some sort of The Onion-esque satire group.  Sadly, Matyszczyk found that they're real.  And serious.

"I'm getting sick and tired of dinosaurs being forced on our children," said one member of Christians Against Dinosaurs in an online video you can watch on the above link if you can stand faceplanting multiple times.  "I for one do not want my children being taught lies. Did you know that nobody had even heard of dinosaurs before the 1800s, when they were invented by curio-hungry Victorians?...  Dinosaurs are a very bad example for children.  At my children's school, several children were left in tears after one of their classmates (who had evidently been exposed to dinosaurs), became bestially-minded and ran around the classroom roaring and pretending to be a dinosaur.  Then he bit three children on the face." 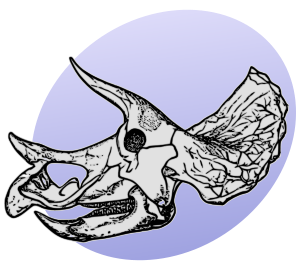 The invention of dinosaur fossils by "curio-hungry Victorians" would have come as a great shock to 3rd century Chinese historian Chang Qu, who describes the discovery of what he called "dragon bones" at a site that would later prove to be a rich paleontological site of Jurassic-era fossils.  Equally shocked would have been 17th-century British naturalist Robert Plot, who described the fossilized femur of a Megalosaurus in his book The Natural History of Oxfordshire.

Sadly, though, Christians Against Dinosaurs is not some kind of isolated wacko splinter group.  There's a whole movement afoot to discredit all fossils.  Consider the post over at Clues Forum entitled "The (Non-religious) Dinosaur Hoax Question," wherein we find out that because fossils are "rock in rock," the paleontologists are simply taking blocks of rock and carving them into whatever shape they want, and then saying, "Look!  A fossil!"  Here's a sample:


Fossils, then, are basically bones that have turned into a sort of rock. They are rocks that mimic the form of a bone that is now long gone. Many of the dino bones on display in museums are bone-shaped rocks essentially. The problem I have with this is that, according to many cable TV “science” shows I have watched over the years, these dinosaur fossils are often found embedded in rock. So, we're talking about digging out rocks imbedded in rock and we must trust that those who prepared these fossils for display have correctly carved away the non-bone rock from the real bone rock. But, in our hoax-filled world of fake science, doesn't this rock-in-rock situation make it rather easy for creative interpretations of what the animal really looked like? And, once a particular animal is “approved” by the gods of the scientific community, wouldn't all subsequent representations of that same animal have to conform with that standard?

I think what bothers me most about this is the phrase "our hoax-filled world of fake science."  Does this guy really think that scientists are getting grants to sit around making shit up?  And because all of the other scientists are in on it, no one blows the whistle?

Oh, and then the guy does this whole thing about how the discovery of fossilized Velociraptor claws are suspect because they look "just like bear claws."  Can I just ask one question?

Wouldn't you expect bear claws and Velociraptor claws to be similarly-shaped, because otherwise they wouldn't be called "claws"?

The most mind-blowing thing about this is how simple it would be to destroy the whole "argument," if this guy was really interested in finding out answers.  All he'd have to do is two things: (1) volunteer to go on a paleontological dig, and (2) talk to any scientist about how peer review is done.  But no, that's apparently too much to ask.

Much easier to sit at home talking out of your ass about "non-bone rock and real bone rock."

And then, then, the guy has the audacity to refer to himself as "skeptical."  This use of the word (as in "climate change skeptic") just makes me want to punch a wall.  "Skeptical" does not mean "someone who disbelieves in random stuff."  It means "keeping your mind open until sufficient evidence is obtained."

And don't even get me started about how the author calls his disbelief-o-thon a "theory."

But back to Christians Against Dinosaurs.  The group has a Facebook page, wherein we are told, "We all know God never created dinosaurs, and its great to have a place we can all celebrate this... I only hope that it serves as an outlet for others too afraid to speak out about their doubts in the field of paleontology.  It is healthy to question the world around us and not just take the word of science as gospel."

The last sentence of which should win some kind of Unintentional Irony Award.

Oh, yeah, and on the Facebook page we also find out that "The Museum Industry Complex are [sic] ruthless."  The rest of us, apparently, are simply shills for the Paleontological Mafia.  Jack Horner, then, would be the Don Corleone of the dinosaur world, and if we try to interfere with his research, we stand a good chance of waking up with the severed head of a T. rex in our bed.

So anyway.  The latest in the world of reality denial; don't argue that extinct species died in the Great Flood, argue that they never existed in the first place.  I wonder what's next?  Maybe deciding that all of us science-types don't exist, either.  The whole world is populated by a few thousand holy people, and everything else is imaginary, placed there by Satan to trip up the true believers.

If you're going to deny reality, hell, why not go all the way?
Posted by Gordon Bonnet at 3:08 AM