The fire of the mind

In Umberto Eco's masterful medieval murder mystery The Name of the Rose, we meet a villain who is willing to kill, over and over, to stop his fellow monks...

The following is a spoiler, so you can skip the next few paragraphs (scroll down to where it says [end spoiler alert]) if you haven't read Eco's novel.  Which I hope you all will, because it's brilliant.  But the punchline makes a point that needs to be made now, seven centuries after the time in which the novel is set, as strongly as it did then.

Europe of the early 14th century was a grim place, and life was, in Thomas Hobbes's words, "solitary, poor, nasty, brutish, and short."  Religion had an iron grip over people's lives, and the learned men of the time taught that the fear of god was paramount.  This fear was translated downwards into fear of the "hierarchy of heaven," as represented here on Earth by the Pope, Cardinals, Bishops, and the monastic system.  And within that system, questioning and freedom of thought was considered heresy, punishable by death.

In this system we find two opposing characters: the brilliant and curious scholar Brother William of Baskerville, and the stern and unyielding Brother Jorge of Burgos.  William is called in to solve a series of murders that have occurred in an unnamed abbey in the mountains of Italy.  The murders revolve around the abbey's magnificent library, the secrets of which are only accessible to the librarian and his assistants.  And one by one, the monks connected with the library are being picked off by someone who is bound and determined to keep some of its knowledge out of the hands of the monks (or anyone else).

The knowledge in question turns out to be a book by Aristotle that was thought lost; the second volume of his Poetics, in which he describes the proper use of comedy, and argues that laughter is freeing, proper, and purifying for the soul.  When Brother William solves the mystery, and discovers that Brother Jorge is behind the murders and has hidden the book, he confronts the old man, and asks him why it was so important to keep such a seemingly innocent volume out of people's hands.  Brother Jorge responds:


(L)aughter is weakness, corruption, the foolishness of our flesh... (H)ere, the function of laughter is reversed, it is elevated to art, the doors of the world of the learned are opened to it, it becomes the object of philosophy, and of perfidious theology...  You saw yesterday how the simple can conceive and carry out the most lurid heresies, disavowing the laws of God and the laws of nature.  But the church can deal with the heresy of the simple, who condemn themselves on their own, destroyed by their own ignorance...  Laughter frees the villein from fear of the Devil, because in the feast of fools the Devil also appears poor and foolish, and therefore controllable.  But this book could teach that freeing oneself from the fear of the Devil is wisdom.  When he laughs, as the wine gurgles in his throat, the villein feels he is master, because he had overturned his position with respect to his lord; but this book could teach learned men the clever, and from that moment, illustrious artifices that could legitimize the reversal.

To Brother Jorge, it is worth killing, and dying, for his desperate necessity to keep others from knowing the justification of laughter, mirth, and irreverence.  And in the end, he destroys the book and burns down the library to keep that knowledge from the world.

Which brings us to what has happened in the Middle East in the last few days.

The depredations of ISIS have been all over the news lately, but none have seemed more bizarre and pointless to the western world as two that have occurred recently.  The Islamic State's arm in Libya four days ago burned a pile of musical instruments, saying that such things are "un-Islamic."  Then, just two days ago, ISIS members in Iraq burned the hundred-year-old library in the city of Mosul, destroying 8,000 rare books that were a treasure-trove of cultural information and history.  "900 years ago, the books of the Arab philosopher Averroes were collected before his eyes...and burned," wrote activist and blogger Rayan al-Hadidi.  "One of his students started crying while witnessing the burning.  Averroes told him... the ideas have wings...but I cry today over our situation." 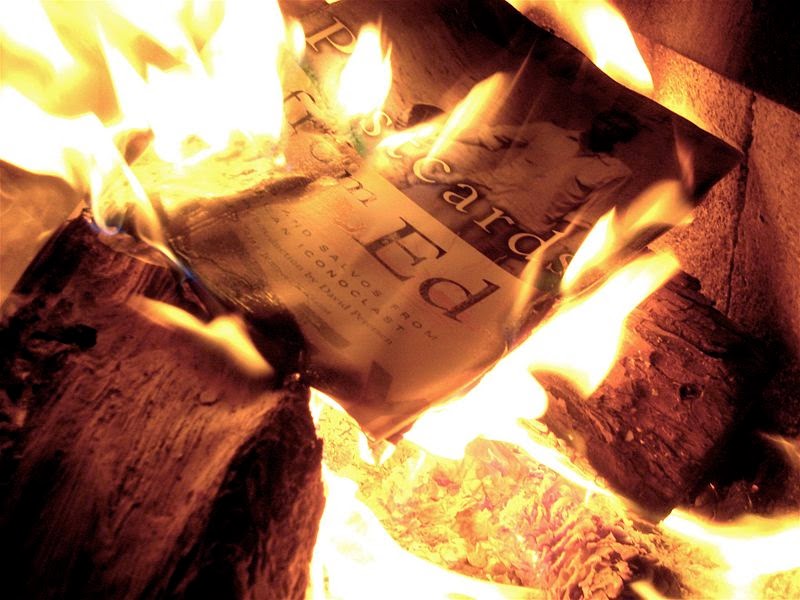 [image courtesy of photographer Alan Levine and the Wikimedia Commons]

Why, in a situation where ISIS members are fighting daily to maintain ground and to keep control of the people they've conquered, would they stop what they're doing to burn musical instruments and ancient manuscripts?  It seems pointless.  Wouldn't they have better things to do with their time and energy?

No.  What ISIS is doing has its own pervasive, evil logic.

It has to do with exactly the same thing that Venerable Jorge hated the idea of: reading, laughter, and music free people from fear.  If you are going to control people, you must control their thoughts.  The first thing you do, therefore, is to destroy any opportunity for them to experience something outside of that control.

Music lifts our emotions into heights that cannot be measured.  When we read, our spirits are free to think any thought, put ourselves in other people's minds, other places, other times.  Dancing does the same thing, which probably explains why Saudi Arabia's "morality police" arrested some young men four days ago for dancing at a birthday party.

Can't have people experiencing anything outside of the narrowly prescribed range of thoughts, feelings, and actions.  If people go outside that range, anything could happen.  And would.

And then, the sword-bearing horrors who are now running much of the Middle East would not be in control any more.  People would learn that there's more to life than fear and obedience, more than living in terror of a grim, humorless cadre of thugs who are so afraid themselves of intellectual and emotional freedom that they will stop at nothing to prevent it from spreading to others.

I live in hope that in our world of interconnectedness and free flow of information via the internet, such control cannot be maintained for long.  We have seen the difficulty the Saudis are having in keeping the holes in the dam from leaking; bloggers and activists who openly criticize the regime are growing in numbers.  Some, such as Raif Badawi, have paid a horrible price for exercising that freedom.

But the truth that ISIS doesn't want their victims to realize is that the spirit of free thought burns hotter than the flames of destruction.  Even if you set fire to books and musical instruments, you can't really control thoughts, even through threats and terror.  The human mind is stronger and more resilient than that.  So even though I weep for the treasures that were lost in the burning of the Mosul Library, I remain optimistic that the desperate and amoral men of ISIS will one day be trod underfoot and forgotten to all but historians, just as their brothers-in-spirit -- the Inquisition of the 14th century -- have been.
Posted by Gordon Bonnet at 1:56 AM