Superstition in general leaves me a bit mystified.  As long as I can remember, I've never understood how people can believe in good luck charms and actions that will curse you to its opposite, or that some purely natural phenomenon is a sign from god... or a message from his infernal counterpart.

This is why I responded with frank bafflement at people's reaction to the photograph that went viral this week in the aftermath of the tornado that struck Moore, Oklahoma. 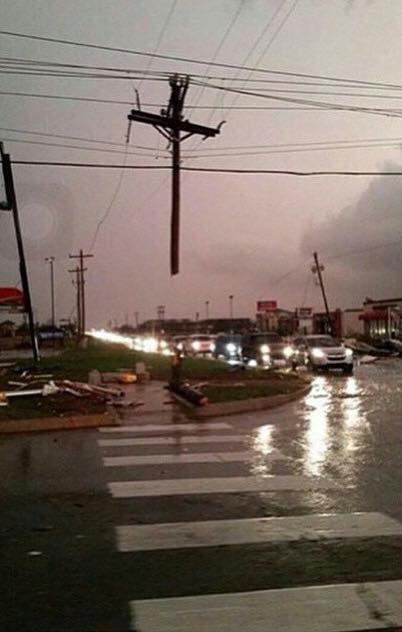 The photo was reposted tens of thousands of times on social media, usually with messages like, "God is with us even in difficult times!" and "Praise the Lord!  He is here!"  This elicited two main questions in my mind:  (1) Aren't telephone poles always shaped like a cross?  And (2) if the Almighty wanted to send the people of Oklahoma a sign of his presence, wouldn't it have been more considerate to do it without smashing the shit out of the town first?

This last question is especially pertinent, given that Moore has been hit by tornadoes seven times in the past twenty years, with the ones in 1999 and 2013 being particularly devastating (the tornado in 1999 cut a 38-mile-long swath of destruction, and resulted in the highest windspeed ever measured on the Earth's surface -- 301 miles per hour).  So my guess is that given the choice between receiving a cross-shaped sign from god, and not being blasted to smithereens by a tornado again, most of the citizens of Moore would choose the latter.

So I found people's responses to the photograph pretty perplexing.  Of course, I had the same reaction to the kerfuffle over the cross-shaped chunks left in the wreckage after 9/11: 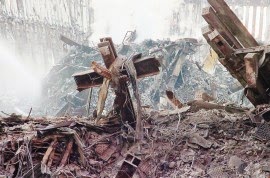 Because, after all, this is what the intersection of two girders looks like.  But this one resulted in a war of words between people who wanted to clear away the debris and people who saw this as a holy message from god and wanted it left as-is.  In the end, it was installed on a pedestal at Ground Zero, and has become an object of devotion by the religious. 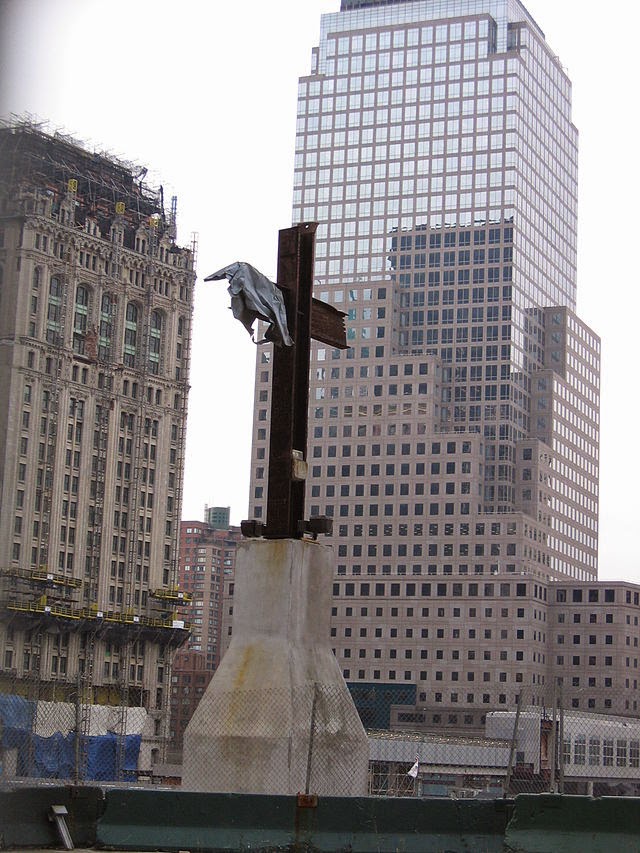 [image courtesy of photographer Samuel Li and the Wikimedia Commons]

Once again, I find this kind of incomprehensible.  You'd think if god wanted to send a sign to the faithful, a bunch of writing in the sky an hour earlier saying "THERE ARE CRAZIES WHO HAVE HIJACKED AIRPLANES AND ARE ON THE WAY TO DESTROY THE WORLD TRADE CENTER, GET OUT NOW!" would have been more to the point.

Note that this is a completely separate question from the question of whether an all-powerful deity exists in the first place.  My only point here is that if there is a deity, then leaving behind cross-shaped debris after something has wreaked destruction, ruin, and death is a pretty peculiar way to communicate with his followers.

On the other hand, I guess if it brings people solace after a tragedy, there's some benefit to it.  It's better than despair, after all.  But while I went through times in my life when I desperately wanted to believe in the supernatural -- during my teens and early twenties, I was pretty much constantly casting about for evidence of such phenomena -- the whole "Sign from God" thing never made sense to me.  Which is probably why it used to piss me off no end in English Lit classes when the teacher would tell us that in chapter 3, the Clouds In The Western Sky were foreshadowing the horrible events that would unfold for the Main Character And His Doomed Lover in chapter 7.  "Oh, come on," I recall thinking.  "They're clouds.  As in big blobs of condensed water droplets.  They don't give a rat's ass about the Main Character And His Doomed Lover."

Nor, I suspect, does the broken telephone pole in Moore, Oklahoma have anything to do with a divine message.  It's a striking photograph, yes, but no more than that, especially given that telephone poles are already more-or-less shaped that way.

Or maybe I'm just missing the Divine Message Recognition Module in my brain.
Posted by Gordon Bonnet at 2:51 AM