I don't usually like to post multiple times on the same topic only a few days apart, lest I be seen as constantly ringing the changes on the same idea, but sometimes circumstances demand that I do.

Last week I wrote a piece about the discovery that climate change denier Wei-Hock (Willie) Soon had financial ties to the petroleum industry and the Koch brothers that he had not disclosed in his academic papers, an omission that clearly contravenes standards of scientific ethics.  Although Dr. Soon's transgressions surprised no one, it was worth noting from the standpoint of doing what the deniers themselves demand, that is, "following the money."

Shortly thereafter we had Senator James Inhofe telling a bunch of his fellow senators that because it was cold outside, climate change wasn't occurring.  He demonstrated his entire knowledge of climatology by holding up a snowball, thus simultaneously proving that your skull can be filled with cobwebs and dead insects, and you can still get elected to public office.

But what brings this topic back to my attention is the release of information from the National Snow and Ice Data Center that shows that the Arctic Sea ice is already thinning rapidly (it's March, folks) and is set to go into a melt this year that climatologists are calling "catastrophic."

Here's how the trend was described by science blogger Robert Marston Fanney:

Ever since Monday, extent values have been falling by an average rate of 10,000 square kilometers each day. A steady progression of warm air fronts through the Barents coupled with well above average temperatures in the Bering and near Alaska region have generated heat pressure along the ice edge and well into the Central Arctic.

These two hot spots, together with another warm pool over Greenland have shoved the Arctic, as a whole, into the +2 C range. A rather high departure that is only forecast to worsen in the GFS model summary over the coming days.

I don't want to quote anything further from Fanney's post, because it deserves to be read in its entirety (please go to the link I posted above to read it), but you get the picture.  Record high temperatures for the Arctic, including many regions above the freezing point of water -- and we haven't even hit the Vernal Equinox yet. 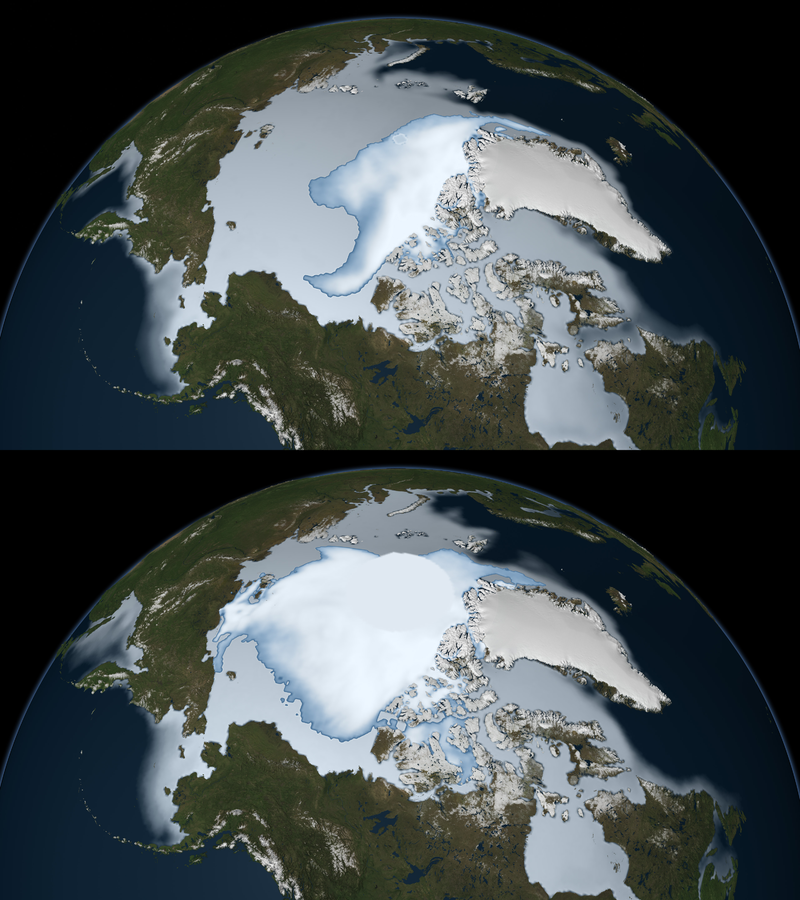 Sea ice coverage in 1980 (bottom) and 2012 (top), as observed by passive microwave sensors on NASA’s Nimbus-7 satellite and by the Special Sensor Microwave Imager/Sounder (SSMIS) from the Defense Meteorological Satellite Program (DMSP). Multi-year ice is shown in bright white, while average sea ice cover is shown in light blue to milky white. The data shows the ice cover for the period of 1 November through 31 January in their respective years. [image courtesy of NASA and the Wikimedia Commons]

The frightening part of all of this is that once you start opening up gaps in the ice sheet, there's a risk of a positive feedback effect.  Open water absorbs heat from insolation far better than snow and ice do.  This will accelerate the warming, opening up further gaps, and so on.  Storing vast amounts of heat in the Arctic Ocean will also affect the weather; the Northeastern deep-freeze this winter, and the repeated snowstorms that slammed the mid-Atlantic states and New England, were caused by a meander in the Polar Jet Stream that brought a blob of Arctic air far south of where it should have been, this time of year.  So Inhofe's snowball is actually consistent with climate models -- not that I expect him to have the intelligence to understand that.

In fact, the whole climate-denier mindset depends on three things; confirmation bias, the power of money, and a sly ability to cherry-pick your facts.  This last one is particularly insidious; that game involves publicizing like hell any specific data points that seem to support your claim, and not mentioning anything else.

You have to wonder how the deniers would explain away the latest from the NSIDC.  My guess is that what we'll hear from them is the following:

It puts me in mind of a quote from linguist Alice Kober:  "Facts are slippery things.  Almost anything can be proved with them, if they are selected correctly."
Posted by Gordon Bonnet at 3:02 AM