One of the (many) things that drives me nuts about woo-woos is the fact that they will take incorrectly or incompletely understood scientific research and pretend that it supports whatever goofy idea they are currently promoting.

It's why the creationists immediately go for the holes in scientific knowledge as support for the universe being 6,000 years old (the "god of the gaps" idea), throwing in an occasional bit of actual science as support, and ignoring the vast ocean of evidence that completely discredits their claim.  It's why the homeopaths talk about vibrations and quantum states as if they understood what they were saying, stopping with Deepak Chopra in their quest to find out what the scientists themselves have to say on the matter.

I ran into an especially good (or bad) example of this yesterday, when I bumped more-or-less accidentally into a concept from the woo-woo canon called "Inherited Miasma."  Here's what the Ascension Glossary has to say about inherited miasma:


Miasma is a psycho-spiritual inherited distortion created by trauma, abuse, fear based belief systems and Soul Fragmentation which, over time, was genetically encoded in human DNA, and resulted in various forms of dis-ease or imbalance. These dis-ease patterns were then encoded and passed down in Negative Ego behaviors or DNA code from generation to generation from the genetic alteration made from the NAA influence. Levels of the passed down distorted or flawed DNA would result in a dissipation of the original form of the disease. The manifested diseased energy and its physical body pattern would sometimes skip generations. The dissipated energetic pattern (cellular memories from the Ancestry or Family of Origin) of the original disease would then manifest in future generations in lesser or hybridized forms.

Which sounds pretty scary, especially when you find out that "NAA" stands for "Negative Alien Agenda," which, we are told, consists of the plans of a bunch of alien psychic parasites to use us as a food source.

If you descend from people who were oppressed at some time in history (who doesn't?), not to worry; you can get past all of this:


When one awakens, one will then need to decide what you want to energetically “wear” - as everything you inherited in your family (and the collective human race) does not have to become a part of your self-defined identity. As you observe and take responsibility for what you are inhabiting (this is your fleshly body) and being accountable to the current station of your life circumstances, one can participate with healing your genetic and miasmatic relationships that reside as energetic memory in your flesh. In most cases if you pay attention to the various patterns (attitudes, ideals, emotional intelligence) in your current Bio-Family dynamic, you will know these archetypal patterns extend to other lifetimes as well as hold relevant information and clues to what you agreed to heal (types of collective human miasma) while you incarnated on planet earth during the Ascension Cycle.

So yeah, that's a relief.

What is maddening about this is that these wingnuts don't have any evidence to support their claims, and they don't need to; the claim itself is so vague that you could decide that damn near anything you experience comes from "miasma."  Headache?  It's because one of my ancestors got punched in the nose.  High blood pressure?  My ancestors experienced stress that is now encoded in my genes.  No specific, testable, potentially falsifiable statements, just an evil influence stalking us from our long-dead relatives. 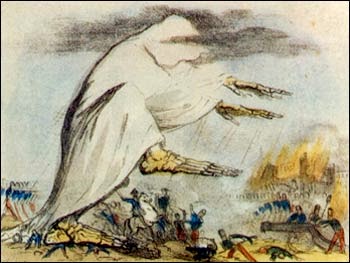 Miasma by Robert Seymour [image courtesy of the Wikimedia Commons]

Okay, now for the really maddening part.  These folks have latched on to some actual science as support for their silly pseudoscience.  A relatively recent discovery in genetics is that some variations in a population are not due to changes in the DNA itself, but due to changes in the transcriptional potential -- the degree to which certain genes are expressed.  Called epigenetics, this phenomenon often has to do with the amplification or silencing of genes in parents or even grandparents, which then affects how the children (or grandchildren) express their own copies of the genes.  It's kind of a weird twist on the ideas of Lamarck -- that in certain cases, acquired characteristics can be inherited.

A fascinating example of this phenomenon just came out in Scientific American last month.  A study has shown that the children of Holocaust survivors have elevated levels of stress hormones.  The leader of the research team, Rachel Yehuda of the Icahn School of Medicine at Mount Sinai, found that children were influenced in utero by the stress their mothers were experiencing:


It is not completely clear why survivors produce less cortisol, but Yehuda's team recently found that survivors also have low levels of an enzyme that breaks down cortisol. The adaptation makes sense: reducing enzyme activity keeps more free cortisol in the body, which allows the liver and kidneys to maximize stores of glucose and metabolic fuels—an optimal response to prolonged starvation and other threats. The younger the survivors were during World War II, the less of the enzyme they have as adults. This finding echoes the results of many other human epigenetic studies that show that the effects of certain experiences during childhood and adolescence are especially enduring in individuals and sometimes even across generations.

Note how precise the language is.  No hand-waving psycho-spiritual inherited distortions; a specific claim that elevated cortisol levels in a pregnant woman can affect her child's ability to transcribe a gene related to cortisol metabolism.  Measurable, testable, and based in comprehension of the actual science.

The unfortunate part, though, is that the "inherited miasma" people love epigenetics, the same way the homeopaths love quantum physics, because at a quick read the science appears to support their crazy stance.  They read the first paragraph of a Wikipedia article on the topic (I swear, from some of the stuff I've read, they can't have done any more than that), and then blather on about how inheritance doesn't require DNA, our ancestors' spirits are still influencing our lives, karma, reincarnation, and off the edge of the cliff they go.

Look, it's not that I'm some kind of elite scientist myself; one of my faults is that my knowledge is a light year across and an inch deep.  I'm a generalist, a dabbler, a dilettante, or whatever other related epithet you want to throw at me.  But when I talk about something, I take the time to read what the actual non-dilettantes have learned about it, rather than picking up a ten-dollar word or two and then pretending I'm claiming something valid.  Anyone else can do the same.  What these people are doing is not only misleading, it's lazy.

And frankly, I'm glad that there's no such thing as inherited miasma.  I've done a good bit of genealogical research on my family, and some of the people I descend from went through some seriously awful times, which, given that they were mostly French and Scottish peasants, is perhaps not too surprising.  On the other hand, one of my ancestors, one Alexander Lindsay of Glamis, Scotland, apparently lost his soul to the devil in a card game.  So maybe there's something to it, after all.
Posted by Gordon Bonnet at 2:44 AM