Is it just me, or do a lot of high-profile members of the evangelical wing of Christianity seem to have lost their minds lately?

I mean, it's not like they haven't been saying some odd things for a while.  Pat Robertson, for example -- who at this point must be what, 148 years old? -- has been entertaining us for as long as I can remember.  But now we've got apparently insane hyper-Christians, many of whom have been elected to public office, making statements that under normal circumstances would qualify a person for medical supervision.

First we have Governor Mike Pence of Indiana, signing into law the Religious Freedom Restoration Act, which "prohibits state or local governments from substantially burdening a person's ability to exercise their religion — unless the government can show that it has a compelling interest and that the action is the least-restrictive means of achieving it."  All of which sounds pretty innocuous until you realize that what prompted the bill was a series of cases in which Christian-owned businesses wanted government protection for their decision not to serve gays and lesbians.

Making it clear that this was what the bill was about, Eric Miler of Advance America said about the bill's passage, "It is vitally important to protect religious freedom in Indiana.  It was therefore important to pass Senate Bill 101 in 2015 in order to help protect churches, Christian businesses and individuals from those who want to punish them because of their Biblical beliefs!"

And despite this, Governor Pence swears that the RFRA has nothing to do with discriminating against LGBT people.  "This is not about discrimination," he said, in a press conference. 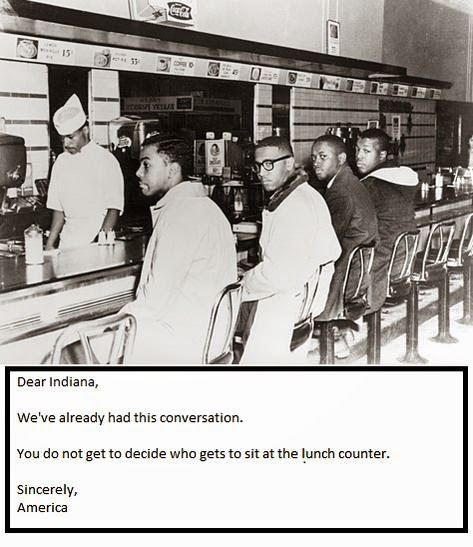 The state is already beginning to experience a backlash.  Supporters of non-discrimination policies have begun pulling out of Indiana, most dramatically the software company Salesforce, which operates a S&P 500 corporation headquartered in Indianapolis.  "We have been an active member of the Indiana business community and a key job creator for more than a decade," Scott McCorkle, CEO of the Salesforce Marketing Cloud division, wrote in a letter to Indiana lawmakers. "Our success is fundamentally based on our ability to attract and retain the best and most diverse pool of highly skilled employees, regardless of gender, religious affiliation, ethnicity or sexual orientation.  Without an open business environment that welcomes all residents and visitors, Salesforce will be unable to continue building on its tradition of marketing innovation in Indianapolis."

But what Pence and the Indiana state legislature has done is sane compared with what we're hearing from other right-wing Christian elected officials.  How about Senator Sylvia Allen, a member of the State Senate of Arizona, who last week proposed a way to fix the problems in the United States: mandatory church attendance.

In a debate over laws governing carrying concealed weapons, Senator Allen suddenly made the following statement, which should be an odds-on contender for the 2015 Non Sequitur Award:


I believe what's happening to our country is that there's a moral erosion of the soul of America.  It's the soul that is corrupt.  How we get back to a moral rebirth I don't know.  Since we are slowly eroding religion at every opportunity that we have.  Probably we should be debating a bill requiring every American to attend a church of their choice on Sunday to see if we can get back to having a moral rebirth.

What does that have to do with concealed-carry laws?  I have no idea.  Neither, apparently, did the rest of the senate, who just sort of sat there staring at Senator Allen with their mouths hanging open.

Then we have State Representative Gordon Klingenschmitt of Colorado, who on his television show Pray in Jesus's Name commented upon a brutal attack on a pregnant woman that occurred earlier this month, and said that the attack had happened because of the "curse of God upon America for the legalization of abortion."  Worse, still, when people reacted with outrage to Klingenschmitt's statement, he informed us that he has the right to say any damn thing he wants to, because, you know, 'Murica.


I'm against evil and I'm in favor of good. If other people are offended by the Bible, that's okay, they don't have to agree with me or come to my church or watch my TV show.  It's a free country.  If you're offended because I quote the bible in church, I ask you to forgive me but I will not apologize for quoting the Bible in church.  If the government is now going to step into my church on Sunday and say "oh, you're not allowed to do that because you are an elected official," I would ask people to take a step back and think about how the government should be protecting your freedom of worship on Sunday and maybe cut me a little slack.

Then we had a war of words between conservative Idaho State Representative Paul Shepherd and a LGBT activist named Dylan Hailey.  Shepherd had forgotten to renew his subscription to the website domain name www.paulshepherdusa.com, so Hailey bought it and converted it to a website describing the struggles of LGBT individuals in Idaho.

Well, Shepherd wasn't going to take that lying down.  In an interview with Melissa Dalvin of Idaho Reports, Shepherd made an analogy that "WTF?" doesn't even quite cover:  "Slave owners were very good Christians and good people," Shepherd said.  "They weren't terrible, rotten, horrible people.  And that's how I see gay people."

And it wasn't just the elected officials.  It appears that because of a byzantine rule regarding the way proposals for laws work in California, an attorney named Matthew McLaughlin may be in position to force lawmakers to consider a bill called the "Sodomite Suppression Act."  Here's an excerpt:


Seeing that it is better that offenders should die rather than that all of us should be killed by God's just wrath against us for the folly of tolerating wickedness in our midst, the People of California wisely command, in the fear of God, that any person who willingly touches another person of the same gender for purposes of sexual gratification be put to death by bullets to the head or by any other convenient method.

Now, nobody thinks that this bill has a chance of passing -- it's doubtful if even people like Klingenschmitt and Shepherd would vote for something like this.  But just the very fact that it's under consideration is terrifying.

You know, the whole thing makes me think about the Roman Empire.  It worked pretty well for a while, you know?  Then all of a sudden, you had people like Caligula having his horse elected to the Senate and ordering his armies to whip the ocean because he wanted to teach the god Neptune a lesson, Nero singing songs in praise to himself while watching people being burned alive, and Elagabalus, who made up his own religion revolving around the idea that prostitution was holy, and killed anyone who refused to join it.

Actually, I hope I'm wrong, here.  Because once the Roman Empire more-or-less imploded, the whole place was overrun by barbarians, and that wasn't much better.  So let's hope we can replace our own modern-day Caligulas with people who are interested in sensible governance.
Posted by Gordon Bonnet at 4:48 AM