Scandinavian Jesus and nukes over Charleston

I ran into two examples of complete batshit lunacy in the last couple of days, and they're kind of interesting in juxtaposition.

The first was linked on the r/conspiratard subreddit, a site devoted to ridiculing conspiracy theories.  It's called "Theory: Jesus 'Yashua's' Nazarene," and if you're puzzled by the title, I can say with some authority that it makes more sense than the article itself.

The author, a man who understandably wants only his first name ("Neil") to be known, tells us some pretty earthshattering stuff.  First, we're told that there's a reason that Jesus is often depicted in the United States as a white-skinned dude with blond hair and blue eyes; it's because he was actually Scandinavian.  But not to worry -- he's not being racist, "Neil" says, because he thinks everyone is Scandinavian:


We wonder today if there is a bloodline group alive today that has the same bloodline that Jesus (Yashua) was born with and I SAY YES. This bloodline is not large in number but they represent about 10% of the global populations and can be found primarily in the United State but on all continents as well.

These descendents have a rare blood factor and have prehistoric ancestors that can be tracked back to an area in the world known as the “Garden.” This original people group on earth were what we refer to today as Scandinavians. Believe it or not, the oldest mummies all over the world had blonde hair, which also tells us that our original ancestors were Scandinavians. I mean all of us. It does not matter what color your skin is today, your original ancestors on earth were Scandinavian. When Jesus (Yashua) said we were all brothers he meant it literally.

THE BLONDE BLUE-EYED SCANDINAVIAN NAZARENE TRIBES THAT JESUS (YASHUA) WAS BORN INTO, ARE NOT TO BE CONFUSED WITH THE RED HAIR GREEN-EYED BLOODLINE KNOWN AS THE “TRIBE OF CAIN” that is also known as the “Tribe of DAN”, WHICH IS A HYBRID BLOODLINE.

So there you are, then.  Don't discriminate against people of other skin and hair colors, unless they're red-haired.  Then it's okay.

Then we hear about how "Neil" realized all of this when he found out that Scandinavians all have Rh-negative blood types, and so, apparently, did Jesus:

The Nazarenes were Scandinavians who apparently had the PURE Rh Negative bloodline factor, which can be tracked back in time to the original human race that was born on this planet in a part of the world that was known as the “Garden”.

The problem with this -- okay, one of the many problems with this -- is that only about 16% of Scandinavians are Rh negative.  The two groups who have the highest incidence of Rh negative blood are the Basques of Spain and the Berbers of Morocco, both of whom have a percent incidence of the gene somewhere in the high 30s to low 40s.  And neither Spain nor Morocco are anywhere near Scandinavia.  And neither place is known for its blond, blue-eyed people.

But this guy doesn't let a little thing like "facts" stop him.  He goes on to tell us how there was a letter from "Pontius Pilot [sic]" that the Vatican is covering up, and it says that Jesus had hair "colored like a chestnut shell or walnut shell," which clearly is the same thing as blond.  He did not have red hair, "Neil" reiterates, making me wonder if he once had a bad experience in Ireland, or something, because he seems pretty vehement on the topic of the Ginger Jesus Theory.

So anyway.  On and on it goes.  My point is that when this site got posted on public media, "Neil" and his "theory" got excoriated.  "What kind of idiot would believe this?" one commenter wrote.  "I live in hope that wackos like him are few in number."  Another wrote, "This has to be a troll.  I flatly refuse to believe that there are people who are that ignorant."


Which brings us to our second story.

Last week, presidential hopeful Rick Santorum gave a speech in South Carolina.  The event was sponsored by Frank Gaffney, which should already put you on high alert -- Gaffney is known as a birther/truther nutjob who believes that America is soon to be under Sharia law.  So no wonder it attracted some peculiar people.

I mean the audience, not Santorum. 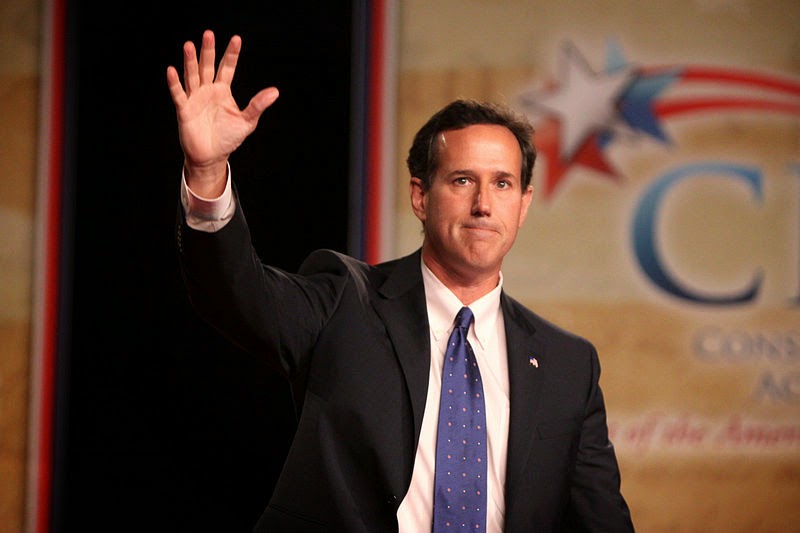 So anyway, Santorum gives his spiel about how Obama is leading America into ruin, the usual blah.  But it really got interesting during the question-and-answer session, when a woman stepped up to the microphone and said this:

Mr. Santorum, thanks for being here, my name is Virginia, I'm a retired schoolteacher, a political activist and a lifelong resident of South Carolina.  I have the same question that I asked Senator Cruz.   I'll preface it by saying that I think Michele Bachmann [unintelligible] that Boehner made a deal... my question is on defending this country, and what you did for national security, and sealing these borders and protecting the United States.  I've fought that battle all my life.  I'm losing, and that's because I'm not getting help from my congress...  Why is congress rolling over and letting this communist dictator destroy my country?  Y'all know what he is, and I know what he is.  I want him out of the White House.  He's not a citizen.  He could have been removed a long time ago...  Everything he does is illegal, he's trying to destroy the United States.  Everyone knows this.  The congress knows this.  What kind of games is [sic] the congress playing with the citizens of the United States?  Y'all need to work for us, not for the lobbyists that pay your salaries.  Get on board, let's stop all this, and save America.  What's going on, Senator Santorum?  Where do we go from here?  Ted told me I got to wait till the next election.  I don't think the country'll be around for the next election.  Obama tried to blow up a nuke in Charleston a few months ago... he's trying to destroy our military, he's fired all the generals and all the admirals that said they wouldn't fire on the American people if he asked them to do so, if he wanted to take the guns away from 'em.  This man is a communist dictator, we need him out of that White House now.

So.  Obama is a communist who has gone around firing all of our military leaders, somehow without that action making national news.  And furthermore, he tried to drop a nuclear bomb on Charleston, South Carolina so that he can get the military to shoot American citizens and then take away their guns.

But here's what's interesting.  Unlike "Neil," whose public appearance in an online forum resulted in his getting his ass handed to him, "Virginia" was treated as if what she said made perfect sense.  Santorum could have taken this as an opportunity to say, "Look.  Let's not believe counterfactual nonsense.  Yes, we do disagree with the president and the Democrats on what the right course of action is for the country; but we're not helping our cause by making ridiculous claims that obviously aren't true."  Instead, here's how he responded:


First, I object to your laying the blame on me, because I'm not a sitting member of the Senate.  I'm not responsible for any of that stuff.  [applause]  But I will tell you this.  You've hit on one point that I absolutely agree, and it's that this is a complete lack of leadership.  The bottom line is, and I can tell you, when President Obama issued that executive order, and I don't care what the executive order was about, when he issued an executive order, an executive action that said that he was not only not going to enforce the law, that he is actively going to change that law, make new law, and be able to act, enforce the agencies to act pursuant to that law, he did something that you mentioned.  The word "tyrant" comes to mind.  It is not, the president does not have the authority to do these things.  The president has done a lot of dangerous things.  This is the most dangerous thing the president has done.

Yes, you read right.  A former senator, and current candidate for the Republican nomination for president, apparently believes that President Obama tried to nuke Charleston.

And this, Dear Reader, is why I write this blog every day.  If we don't start insisting that people sift fact from fiction, if we let crazies like "Neil" and "Virginia" blather away without calling them out on their nonsense, we end up with people like Rick Santorum, who evidently has the critical thinking ability of an avocado, being a serious contender for nominee for the highest office in the land.  Maybe I'm creating a false analogy, here; but to me, it's all the same thing.  Once you decide that facts and logic don't matter, then you'll swallow anything, whether it's some crackpot theory about Jesus having blond hair and Rh-negative blood, or the president having a plan to drop a nuclear bomb on an American city so he can take away our guns.  The only difference is the details.

It all goes back to something Voltaire said, almost three hundred years ago, a saying that I have posted above the whiteboard in my classroom:  "Those who can be made to believe absurdities can be made to commit atrocities."
Posted by Gordon Bonnet at 3:09 AM