I usually don't blog about what other people put in their blogs.  This kind of thing can rapidly devolve into a bunch of shouted opinions, rather than a reasoned set of arguments that are actually based upon evidence.

But just yesterday I ran into a blog that (1) cited real research, and (2) drew conclusions from that research that were so off the rails that I had to comment.  I'm referring to the piece over at Religion News Service by Cathy Lynn Grossman entitled, "God Knows, Evangelicals Are More Science-Friendly Than You Think."  Grossman was part of a panel at the American Association for the Advancement of Science's yearly Dialogue on Science, Ethics, and Religion, and commented upon research presented at that event by Elaine Howard Ecklund, sociologist at Rice University.

Ecklund's research surrounded the attitudes by evangelicals toward science.  She described the following data from her study:

84% of evangelicals, Grossman said, "say modern science is going good [sic] in the world."  And she interprets this as meaning that evangelicals are actually, contrary to appearances, "science friendly."  Grossman writes:

Now, the myth that bites the data dust, is one that proclaims evangelicals are a monolithic group of young-earth creationists opposed to theories of human evolution...

I said this may allow a small subset to dictate the terms of the national science-and-religion conversation although they are not representative in numbers -– or point of view. This could lead to a great deal of energy devoted to winning the approval of the shrinking group and aging group that believes the Bible trumps science on critical issues.

Well, here's the problem with all of this.

This seems to me to be the inherent bias that makes everyone think they're an above-average driver.  Called the Dunning-Kruger effect, it is described by psychologist David Dunning, whose team first described the phenomenon, thusly:


Incompetent people do not recognize—scratch that, cannot recognize—just how incompetent they are...  What’s curious is that, in many cases, incompetence does not leave people disoriented, perplexed, or cautious. Instead, the incompetent are often blessed with an inappropriate confidence, buoyed by something that feels to them like knowledge.

An ignorant mind is precisely not a spotless, empty vessel, but one that’s filled with the clutter of irrelevant or misleading life experiences, theories, facts, intuitions, strategies, algorithms, heuristics, metaphors, and hunches that regrettably have the look and feel of useful and accurate knowledge.

Now, allow me to say right away that I'm not calling evangelicals incompetent and/or ignorant as a group.  I have a friend who is a diehard evangelical, and he's one of the best-read, most thoughtful (in both senses of the word) people I know.  But what I am pointing out is that people are poor judges of their own understanding and attitudes -- and on that level, Dunning's second paragraph is referring to all of us.

So Ecklund's data, and Grossman's conclusions from it, are not so much wrong as they are irrelevant. It doesn't matter if evangelicals think they're supportive of science, just like my opinion of my own driving ability isn't necessarily reflective of reality.  I'm much more likely to take the evangelicals' wholesale rejection of evolution and climate science as an indication of their lack of support and/or understanding of science than I would their opinions regarding their own attitudes toward it.

And, of course, there's that troubling 30% of evangelicals who do see religion and science as opposed, a group that Grossman glides right past.  She does, however, admit that scientists would probably find it "troubling" that 60% of evangelicals say that "scientists should be open to considering miracles in their theories." 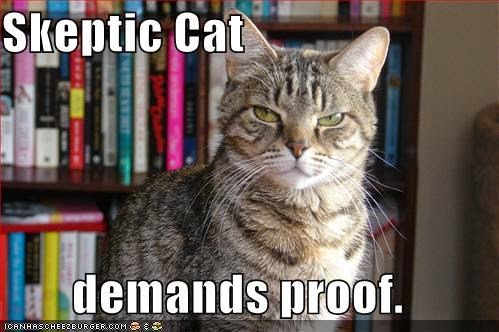 That doesn't stop Grossman from painting the Religious Right as one big happy science-loving family, and she can't resist ending by giving us secular rationalists a little cautionary kick in the ass:


[S]cientists who want to write off evangelical views as inconsequential may not want to celebrate those trends [that young people are leaving the church in record numbers]. The trend to emphasize personal experience and individualized spirituality over the authority of Scripture or religious denominational theology is part of a larger cultural trend toward rejecting authority.

The next group to fall victim to that trend could well be the voices of science.

Which may be the most obvious evidence of all that Grossman herself doesn't understand science.  Science doesn't proceed by authority; it proceeds by hard evidence.  Stephen Hawking, one of the most widely respected authorities in physics, altered his position on information loss in black holes when another scientist, John Preskill, demonstrated that he was wrong.  The theoretical refutation of Hawking's position was later confirmed by data from the Wilkinson Microwave Anisotropy Probe.  Significantly, no one -- including Hawking himself -- said, "you have to listen to me, I'm an authority."

If anything, the trend of rejection of authority and "personal experience" works entirely in science's favor.  The less personal bias a scientist has, the less dependence on the word of authority, the more (s)he can think critically about how the world works.

So all in all, I'd like to thank Grossman and Ecklund for the good news, however they delivered it in odd packaging.  Given my own set of biases, I'm not going to be likely to see the data they so lauded in anything but an optimistic light.

Just like I do my own ability to drive.  Because whatever else you might say about me, I have mad driving skills.
Posted by Gordon Bonnet at 2:34 AM