The source of the noise

A common theme in Skeptophilia is that people in general need to learn some scientific terminology.

Not only is science cool, and thus learning about it a worthy goal in and of itself; but knowing how science works, and some of the field's vocabulary, will keep you from being duped.  As we've seen over and over, the world is full of folks who either through ignorance or outright duplicity misrepresent what scientists are doing -- and without adequate mental firepower, you're gonna fall for their nonsense every time.

As an example, this weekend, a story started popping up all over that claimed that we'd finally received a good candidate for an alien signal from an extrasolar planet.  This immediately caught my eye -- it is one of my dearest wishes that we have incontrovertible evidence of alien intelligence before I die.  I'd be perfectly satisfied if it comes in the form of some kind of radio signal, but if an actual alien spacecraft landed in my back yard, that would also be acceptable, at least until they started vaporizing my dogs with laser pistols.

So my reaction was one of cautious enthusiasm.  Cautious, because I suspected that if this had actually happened, it would be all over the news, not just surfacing in the form of links on Twitter and Facebook.  But the stories all made the same claim.  Here's an excerpt from the version that appeared on UFO Blogger:


Astronomers have picked up a mystery "noise" which they believe could be coming from an Earth-like planet in the outer space [sic]. After analyzing the strange signals emitting from the object, scientiscientistssts [sic] are certain that a habitable planet exists some 22 light years away, a report said.

In 2010, scientists had dismissed the mystery noise or signals as stellar bursts but after the latest research it was clear that an Earth-like planet, or Gliese 581d, has conditions which could support life, and is likely to be a rocky world, twice the size of Earth.

Okay, given the typos and grammar, it's not exactly the most credible of reports.  But all of the links I saw agreed; an extrasolar planet called Gliese 581d, 22 light years from Earth, had been reported as the source of a strange, unexplained noise.  The planet was bigger than Earth, but in the "Goldilocks Zone" -- the "just right" region around its star where water would be in liquid form, and therefore a place where life something like what we have here could evolve.

So immediately I started picturing Star Trek-style aliens, complete with fake rubber alien noses and bad accents.  Then I thought of the amazing final scene in Star Trek: First Contact, which is clearly the best movie the franchise ever produced, wherein Zefram Cochrane shakes hands with a Vulcan for the first time.  And before you know it, I had myself worked up into a lather about the possibilities. 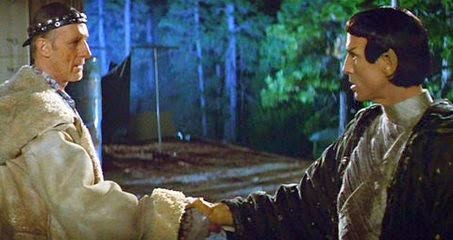 Then I thought, "Calm down, dude.  Verify your sources."  So I typed "noise Gliese 581d" into a Google search to see if I could find out where this information had come from.  Clearly it was all similar enough that it had some kind of common origin, and it wasn't wacky enough to have come from The Weekly World News.  And after five minutes' search, I found the press release in Phys.org that had caused the stir -- the origin of the "noise."

And I put "noise" in quotation marks for a good reason, as you'll see.  The press release was a blurb summarizing a paper in Science by Anglada-Escudé and Tuomi called "Stellar activity masquerading as planets in the habitable zone of the M dwarf Gliese 581."  Here's the relevant passage:


A report published in Science has dismissed claims made last year that the first super-Earth planet discovered in the habitable zone of a distant star was 'stellar activity masquerading as planets.' The researchers are confident the planet named GJ 581d, identified in 2009 orbiting the star Gliese 581, does exist, and that last year's claim was triggered by inadequate analysis of the data.

The planet candidate was spotted using a spectrometer which measures the 'wobble', small changes in the wavelength of light emitted by a star, caused as a planet orbits it. In 2014 researchers revisiting the data said that the 'planet' was actually just noise in the data caused by starspots. The possible existence of the planet was widely dismissed without further questioning.

But now researchers from Queen Mary University of London (QMUL) and University of Hertfordshire have questioned the methods used to challenge the planet's existence. The statistical technique used in the 2014 research to account for stellar activity is simply inadequate for identifying small planets like GJ 581d.

Note the use of the word "noise" twice.  This, apparently, is the source of the story of an alien noise coming from Gliese 581d.

Scientists use the word "noise" differently from the rest of us.  To a scientist, "noise" is scatter in the data, background junk, that might obscure something real and measurable (the "signal").  If you have enough noise, the signal becomes impossible to detect, so reducing the noise in a data set is critical.  A high "signal-to-noise ratio" is what you're after; lots of signal, little noise.  So when the astrophysicists re-analyzed the data from 2009 that had been rejected last year as supporting an Earth-like extrasolar planet around Gliese 581, they found a way of reducing the noise in the data, and were able to confirm that the planet did, actually, exist.

What they did not find was some kind of unexplained noise coming from Gliese 581d.  The noise was the scatter in the data, not some Klingon sending an insulting message at the Earth such as "Hab SoSlI' Quch" ("Your mother has a smooth forehead").

Not that I'm happy to report this, mind you.  No one would be more thrilled than me if we had received an alien communiqué, even if it contained an insult.  But unfortunately, the stories about mysterious and unexplained alien noises turn out to be unmysterious and completely explainable ignorance of bloggers regarding the use of scientific vocabulary.

So we keep waiting.  Given the number of extrasolar planets the astronomers are discovering, I'm still optimistic that one day, we'll find the aliens.  Or maybe they'll find us.  Either way, it'd be amazing, because, after all, Heghlu'meH QaQ jajvam ("Today is a good day to die").
Posted by Gordon Bonnet at 2:31 AM