Websites that cover news about religion, atheism, and matters of belief have been buzzing in the last day or so because of a speech Phil Robertson (of Duck Dynasty fame) gave at a political "prayer breakfast" in Florida. 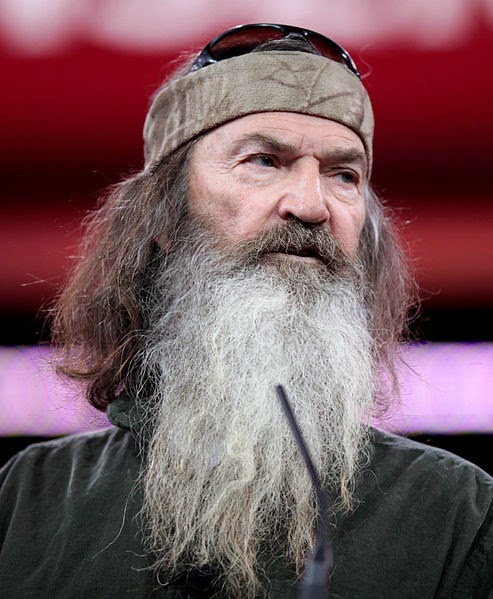 Robertson's speech centered around a gruesome story about an imaginary atheist family.  Here's a transcript (warning: it's ugly and upsetting):


I’ll make a bet with you.  Two guys break into an atheist’s home. He has a little atheist wife and two little atheist daughters. Two guys break into his home and tie him up in a chair and gag him.  And then they take his two daughters in front of him and rape both of them and then shoot them and they take his wife and then decapitate her head off in front of him.  And then they can look at him and say, "Isn’t it great that I don’t have to worry about being judged?  Isn’t it great that there’s nothing wrong with this?  There’s no right or wrong, now is it dude?"

Then you take a sharp knife and take his manhood and hold it in front of him and say, "Wouldn’t it be something if this [sic] was something wrong with this?  But you’re the one who says there is no God, there’s no right, there’s no wrong, so we’re just having fun.  We’re sick in the head, have a nice day."

If it happened to them, they probably would say, "something about this just ain’t right."

There are a number of things going on here worthy of commenting upon.

First, Robertson seems to enjoy talking about this way too much.  Doesn't it seem that he's saying that the only reason he isn't raping and murdering people himself is that god is watching him and judging him?  You have to wonder if it's people like me you should be afraid of... or people like him.

Second, he's implying that there's no way that Christians would do such a thing, that it must be the non-religious people who are running around committing atrocities.  Discounting studies about the religious affiliations of people incarcerated for violent crimes -- such studies rely on self-reporting, and are notoriously inaccurate -- let me just point out that there was a group of people in American history who did exactly the sort of thing he's describing.  Raping, murdering, mutilating, and then gloating over the bleeding bodies of their victims.  It was the Klansmen of the post-Civil-War South -- almost all of whom were "decent, god-fearing Christians," who, when they'd washed the blood from their hands, donned their Sunday best and went to church.

The third problem is that he's saying that if you're an atheist, you must believe that there's no right and wrong, no morality; that without some code of conduct coming in from an outside agency, we'd steal, rape, kill each other.  Funny that this doesn't happen in the natural world, then, isn't it?  There's no god of wolves sending the lupine equivalent of Moses into the pack with tablets filled with rules, and yet wolves share food, care for each other, and rarely kill (or even seriously injure) each other.  Work by Dutch behaviorist Frans de Waal and others has shown that non-human social animals do show deeply moral behavior, which is exactly what you'd expect in the evolution of species that live in large groups.  (Nota bene: Just like humans.)

But the fourth, and deepest, problem is that the twisted behavior Robertson is describing is not forbidden in the Christian bible.  Quite the opposite, in fact.  This sort of thing is commanded by god.  Consider this lovely passage:


Then the Lord thundered, "Bring on the men appointed to punish the city!  Tell them to bring their weapons with them!"  Six men soon appeared from the upper gate that faces north, each carrying a deadly weapon in his hand.  With them was a man dressed in linen, who carried a writer’s case at his side. They all went into the Temple courtyard and stood beside the bronze altar.

Then the glory of the God of Israel rose up from between the cherubim, where it had rested, and moved to the entrance of the Temple.  And the Lord called to the man dressed in linen who was carrying the writer’s case.  He said to him, "Walk through the streets of Jerusalem and put a mark on the foreheads of all who weep and sigh because of the detestable sins being committed in their city."

Then I heard the Lord say to the other men, "Follow him through the city and kill everyone whose forehead is not marked.  Show no mercy; have no pity!  Kill them all—old and young, girls and women and little children.  But do not touch anyone with the mark.  Begin right here at the Temple." So they began by killing the seventy leaders.

"Defile the Temple!" the Lord commanded.  "Fill its courtyards with corpses. Go!"  So they went and began killing throughout the city. [Ezekiel 9:1-7]

Ah, yes, the god of love, ordering his followers to fill the courtyards with corpses.

Then we find out that we're supposed to kill not only non-believing men, women, and children, but also their animals, and destroy the town, as well:


Suppose you hear in one of the towns the Lord your God is giving you that some worthless rabble among you have led their fellow citizens astray by encouraging them to worship foreign gods.  In such cases, you must examine the facts carefully.  If you find it is true and can prove that such a detestable act has occurred among you, you must attack that town and completely destroy all its inhabitants, as well as all the livestock.  Then you must pile all the plunder in the middle of the street and burn it.  Put the entire town to the torch as a burnt offering to the Lord your God.  That town must remain a ruin forever; it may never be rebuilt.  Keep none of the plunder that has been set apart for destruction.  Then the Lord will turn from his fierce anger and be merciful to you.  He will have compassion on you and make you a great nation, just as he solemnly promised your ancestors.  The Lord your God will be merciful only if you obey him and keep all the commands I am giving you today, doing what is pleasing to him.  [Deuteronomy 13:13-19]

But you know, despite all of these divine commands to kill nonbelievers (along with their spouses, children, and the whole shebang), Christians rarely ever do that.  It's almost like they're getting their sense of right and wrong from... somewhere else.

I think it might be fitting to end with a quote from the show True Detective, wherein Detective Rust Cohle says:  "If the only thing keeping a person decent is the expectation of a divine reward, then brother, that person is a piece of shit."
Posted by Gordon Bonnet at 2:17 AM