Welcome to the persecution party!

It's a minor mystery to me why some groups seem to enjoy appearing persecuted.

Maybe they think it's some kind of bizarre pseudo-syllogism:

Just in the last couple of days, we've had three examples from the fanatical evangelical wing of American Christianity wherein we learn that Christians in general are a persecuted minority, because, apparently, comprising 78% of the American citizenry and nearly 100% of the people who hold public office puts Christians in danger of imminent eradication.

Let's start with Franklin Graham, who's shown himself more than once to be an angry little man unworthy of the stature conferred upon him by his name.  His father, evangelist Billy Graham, was and is a thoughtful and moral man who participated actively in the Civil Rights Movement and worked against human rights abuses in the Eastern Bloc and apartheid-era South Africa.   So even though I disagree with his theology, I've always had a grudging admiration for him as a human being.

Franklin, though, seems like a schmuck.  Not to put too fine a point on it.

In an interview with Gordon Robertson, son of noted wingnut Pat Robertson, Franklin Graham went on and on about the upcoming "storm of persecution" that Christians are facing in the United States.  He said:


We’re going to see persecution, I believe, in this country because our president is very sympathetic to Islam and the reason I say that, Gordon, is because his father was a Muslim, gave him a Muslim name, Barack Hussein Obama.  His mother married another Muslim man, they moved to Indonesia, he went to Indonesian schools.  So, growing up his frame of reference and his influence as a young man was Islam.  It wasn’t Christianity, it was Islam.

There are Muslims that have access to him in the White House.  Our foreign policy has a lot of influence now, from Muslims. We see the Prime Minister of Israel being snubbed by the President and by the White House and by the Democrats and it’s because of the influence of Islam.  They hate Israel and they hate Christians, and so the storm is coming, I believe, Gordon.

What makes this even more ridiculous is that when Graham was asked last month by (of all people) Bill O'Reilly if he could name some of the Muslims who are influencing the president, he couldn't come up with a single name.  Not one.

Oh, but "he knows they're there."  That's enough, apparently, to make it a fact.

Next on the persecution hit parade we have radio talk show personalities Mat Staver and Matt Barber, who were offering their opinions on the Washington state florist who was sued because she refused to sell flowers to a gay couple who were getting married.  The florist, Barronelle Stutzman, has become something of a hero amongst the ultra-religious for her actions.  She said, "You are asking me to walk in the way of a well-known betrayer, one who sold something of infinite worth for thirty pieces of silver.  That is something I will not do."

But Staver and Barber, of the radio show Faith and Freedom, seem to have no problem accepting Stutzman's rather inflated opinion of the importance of her actions in the grand scheme of things.  Barber went even further than Stutzman, and issued the following dire warning:


If, God forbid ... the Supreme Court somehow defines and manufactures a constitutional so-called right to sodomy-based marriage this summer, in June, if they do that then the floodgates will be open.  There will be Christian persecution widespread across the United States and the so-called gay marriage agenda will be the sledgehammer used to crush the church and to crush religious liberty and the crush individual Christians, their finances, to ruin them.  That's what this agenda was always about and that's what we will see if the Supreme Court goes the wrong way in June.

Righty-o.  Apparently a few people finally being able to have public and official recognition of their committed relationships will lead to wild hordes of out-of-control gays running around smashing Christians with sledgehammers. 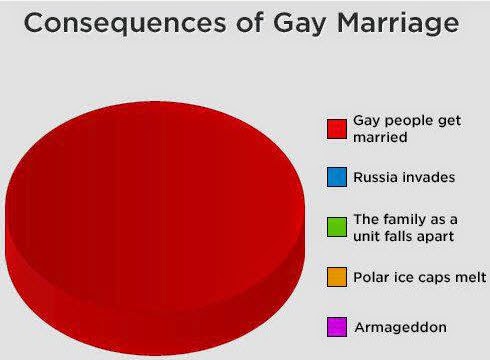 But even that is sensible as compared to what Gordon Klingenschmitt came up with.  Klingenschmitt is a member of the Colorado House of Representatives, winning in 2014 by a 70-30 margin of the popular vote even though he appears to have been doing sit-ups underneath parked cars.  Klingenschmitt decided to weigh in on last month's murder in North Carolina of three young Muslims:


An American atheist has killed three Muslims in North Carolina because they were like Christians.  This man obviously had something against people of faith, whether they're Muslim or Christian, and the three young Muslims were sadly found shot in their homes on Tuesday.  Well, the murderer allegedly of these three young Muslim students is an atheist man named Craig Stephen Hicks, who is not just a person who doesn't believe in Islam, but he is so radically atheist that he was arrested on suspicion of three counts of first-degree murder.  Hicks is reportedly a vocal supporter of United Atheists of America, and according to his Facebook page, was a fan of television shows like The Atheist Experience, and also the Southern Poverty Law Center.  Here's a radical left-wing atheist who is going around killing people of faith.  He's posted a number of anti-religious images and messages on his Facebook page.  One of the images he posted said, and I quote, "Why radical Christians and radical Muslims are opposed to each other's influence when they agree about so many ideological issues."  So he killed the Muslims because they think like Christians.

First, Hicks was not arrested because "he is so radically atheist," he was arrested because he almost certainly murdered three people.  It seems unlikely that he did so solely because the three were Muslim; his ex-wife, Cynthia Hurley, described Hicks as an angry and confrontational man who once watched a movie that involved a man going on a shooting rampage and found it "hilarious."

"He had no compassion at all," Hurley said about Hicks.

So Hicks was an atheist who didn't like Muslims, but he was also a violent man who is very likely to be mentally unbalanced.  He'd had repeated angry exchanges with his three victims over parking spaces, and it's thought that this might have actually been what set him off.

But Klingenschmitt doesn't like things complicated.  In a bizarre screed that should win the 2015 Pretzel Logic Award, Klingenschmitt has Hicks thinking, "Wow, these Muslims, they think just like Christians!  And Christians deserve to be killed, because that's what I found out from the Southern Poverty Law Center!  I think I'll go kill them right now."

Which may have edged out James Inhofe's Senator-with-a-Snowball act as the single stupidest thing an elected official has said so far this year.

So there you have it.  Between Obama and his invisible Muslim advisors, and crazed gays forcing florists to sell gay men flowers at sledgehammer-point, to people killing Muslims because they're so much like Christians, I give you: the evangelical pity-party talking points of the day.

Which brings me back to my original question of why this worldview is so appealing.  Is it because people are more likely to rally around the cause if they feel threatened?  It seems the only logical explanation to me.  Because by any other standard of rational discourse, these people are sounding increasingly like they've lost their minds.
Posted by Gordon Bonnet at 3:04 AM