Allow me to reiterate a plea I've made more than once in Skeptophilia; would everyone just stop and learn a little bit of science and a few critical thinking skills before forwarding every damn thing you see on Facebook and Twitter?

I say this because of two stories I ran into in the last couple of days.  The first was sent to me by a friend and loyal reader of this blog -- not because he believed it himself, allow me to point out, but because he was in awe that anyone did.  It involves a claim that there's a "death sound" that is so amazingly intense that it can kill you instantly if you hear it.  Here's the direct quote:

There's a sound that is 36 octaves below middle C, that is so low that it kills you.  The sound waves literally kill you.  And this sound is only found in dark matter (for what we know).  This is so cool.

Well, the originator of this claim may "love science," but I'd settle for less love and more understanding.  Because the number of ways in which these five short sentences don't make sense are so many and varied that it may set a record for bullshit-to-verbiage ratio.

Let's start with there being a sound that's 36 octaves below middle C.  Middle C has a frequency of 262 hertz (give or take), and for those of you who aren't physics-adept, one hertz = one vibration per second.  For each octave the pitch drops, the frequency goes down by a factor of a half.  (So one octave below middle C would be 131 hertz, two octaves below would be 65.5 hertz, and so on.)

This means that a sound 36 octaves below middle C would have a frequency equal to 262 divided by 2 raised to the 36th power hertz.  This is what is known to mathematicians as "a really freakin' small number."  Put simply, a sound wave at that frequency would correspond to one pulse of the sound passing your ear every 3,040 days.

Then there's the problem that it isn't the frequency of a sound that's dangerous to your hearing (or other bodily functions), it's the amplitude.  Amplitude corresponds to loudness and/or energy transfer capacity, so it's easy to see why high amplitude sounds can be dangerous.

Last, the "dark matter" part of this is just bizarre.  I tried to find out what this could possibly be about, and I did find an article about a discovery in astrophysics in which certain black holes have been discovered to create compression waves in the gas clouds surrounding them (i.e., sound waves) of extremely low frequency.  One, a black hole in the Perseus cluster, generates compression waves with a frequency 57 octaves below middle C.  (For you music geeks, apparently this means that the black hole is singing a B flat.)  No one is claiming that this sound can kill you, although being near a black hole certainly could -- and for the record, black holes have nothing whatsoever to do with dark matter.

Moving on to our other story, we have a new goofy psychic phenomenon that is buzzing on Twitter and other social media platforms.  It goes by the alliterative name of the "Charlie Charlie Challenge," and apparently has gotten so much hype that the hashtag #charliecharliechallenge is now trending.

So the idea is that there's this Mexican demon named Charlie, and you can summon him as follows.  Draw a cross on a piece of paper, thus dividing the paper into four rectangles.  Write "No" on the upper left and lower right, and "Yes" on the upper right and lower left.  Then place a pencil along one of the lines of the cross, and balance a second pencil at right angles to the first, as shown below: 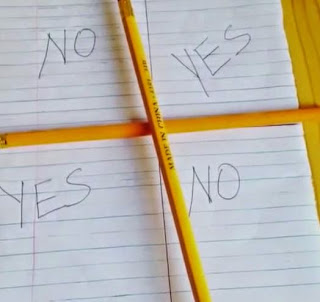 Then you say, "Charlie, Charlie, are you here?"  The balanced pencil is supposed to rotate to give you the answer.

Once again, there are a variety of problems here.  First, if the pencil rotates to "No," then who's moving the pencil?  Even if this works, it's not very interesting, given that apparently all Charlie has to say is whether or not he's there.

Second, do you really think it's that easy to summon a demon up?  I'd think that demons would have much more important jobs to do, such as giving career advice to Ann Coulter.

Third, of course, we have a much simpler explanation for all of this, which is that a precariously-balanced pencil is going to be easy for stray draughts to move, as well as any other minor jostling.  So if you do this, the balanced pencil is eventually going to rotate one direction or the other whether there are demons present or not.

Fourth, a Mexican demon named "Charlie?"  "Charlie" is neither convincingly Mexican nor particularly demonic sounding.  You'd think he'd at least be called Mefistófeles or something.  Although I have to admit that saying "Mefistófeles, Mefistófeles, are you here?" is a bit of a mouthful.

So what we have here is basically a kids' game along the lines of "Bloody Mary," with the difference that we now have online social media to assure that such bullshit gets lots of traction.

Anyhow, there you are.  Death sounds and Mexican pencil-rotating demons named "Charlie."  Further indication that the most powerful information-processing system ever built is now primarily used as a conduit for nonsensical claims and humorous pictures of cats.
Posted by Gordon Bonnet at 2:12 AM