I was a stranger, and you took me in

In troubled times, people forget that one of our core values is compassion.

Despite what you might have heard, it's not unique to Western society, nor to Christianity.  Christianity has its version, yes, but it shows up over and over, in every culture, every religion:
You will notice that nowhere does it say, "This above all: make sure that you keep your own ass safe, warm, and well-fed, and to hell with everyone else, especially if they don't look like you." 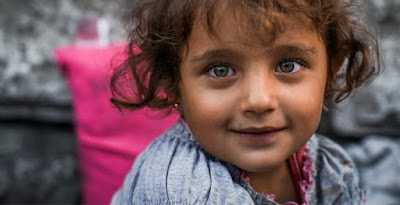 It's why I find myself reluctant to go on social media in the last few days.  The posture that I see taken by some people I consider friends, and by many of our elected leaders, is so profoundly repulsive that I leave every single time feeling nauseated.  Contrast the above lines with some of the things I've seen posted lately:
I think it's this last one that makes me the most angry, because the person who posted this is a staunch Republican, and has more than once screamed bloody murder about the "welfare state" and "government giveaways," and supports a party that has in the past five years been responsible for killing five separate bills that would have provided aid to veterans.  What's the logic?  "We need to help veterans, before we help anyone else!  So let's not help anyone!"

So we sit here, smug in our comfortable houses and eating three meals a day, and turn away thousands of people whose only crime was being in the wrong place at the wrong time.  People who are fleeing ISIS, the extremist sect we ourselves are fighting against.  People who have nowhere to go home to.

Governor Chris Christie said that he wouldn't allow Syrian refugees into New Jersey, "not even orphans under the age of five."  Apparently his conservative family values include the idea that a human being's rights begin at conception and end at birth.

And if you're not swayed by compassion, there's a purely pragmatic reason to take in the refugees.  The way to combat extremism is to put a human face on the target.  The terrorists who are responsible for the Paris and Beirut attacks and other atrocities have their followers brainwashed to think of their victims as evil, barely human, deserving of death.  It's far harder for that message to sell if those same people welcomed you into their homes, fed you and clothed you when you had nothing.  If we send these people back, the ones who are lucky enough to survive the ordeal will have every reason to hate us.

Our actions might just as well be a recruitment drive for ISIS.

Some of you might be saying, "But it's not safe!"   No, it's not.  It's possible that there might be ISIS members embedded in the ranks of the refugees.  Welcoming in the refugees might result in danger to ourselves; it certainly would result in inconvenience, difficulty, hard work.  But wherever did you come up with the idea that the prime goal of life is to be safe?  We just celebrated a federal holiday -- Veteran's Day -- wherein we laud the people who put themselves in harm's way to help others.  I would think that the hypocrisy of following that up with an outcry against putting ourselves in harm's way to help others would be obvious, but apparently it isn't.

And speaking of holidays, we've got two others coming up, remember?  One celebrates a legend in which the natives of a land welcomed settlers in and fed them, even though they looked different, had a different language, and practiced a different religion.  The other is about an event in which a poor Middle Eastern couple was turned away from shelter over and over again, until the woman was forced to give birth in a stable for animals.

Even the parallels there seem to escape people.

We have an opportunity.  We can give into fear, nationalism, and hatred, or we can show the world that the values we brag about and claim are so powerful actually mean something, and are not just a lot of empty, self-congratulatory talk.

It's been a temptation to unfriend or unfollow the people I'm connected to who post repugnant things. If I haven't, it's because that tendency turns social media into even more of an echo chamber, where we're surrounded only by people who shout the same empty slogans as we do, and never are challenged to think differently.  So as much as I would like to disconnect myself from the fear and rage talk I'm seeing, I won't do that.

If I can get one person to reconsider the duty of compassion that comes along with the privileges we enjoy, it will be worth it.
Posted by Gordon Bonnet at 2:12 AM