Like most of us, I have a constant narrator in my head.

My narrator isn't nearly as sensible and coherent as the one Will Ferrell's character heard in the wonderful movie Stranger than Fiction; he heard someone describing his actions, in detail, as he performed them.  (I won't give away any more of the plot than that; you really should watch the movie, which is brilliant, and has killer performances not only by Ferrell, but by Dustin Hoffman, Emma Thompson, and Queen Latifah.)

My internal monologue sounds more like a three-year-old with serious ADHD and the vocabulary of a sailor.  Here's a small sample of my brain chatter from this morning:  "I'm hungry... I've got to write my Skepto post first... wow!  Full moon! Cool!  Let the dogs out first...  I'm still tired... Fuck, now the dogs want back in!... Better get writing...  I'm hungry..."  And so on, and so forth, every waking hour of the day.

No wonder I'm an insomniac, with that nitwit babbling in my skull nonstop.

I've wondered at times if there was a way to get the internal voice to quiet down.  Or at least slow down.  In my several relatively unsuccessful attempts to learn to meditate, I found that if anything, my mental monologue gets louder and more insistent the quieter my surroundings are.  A Buddhist friend who is an advanced student of meditation has said to me, "When you have thoughts, let them flow through your brain and out, without judging.  Just watch them go by."

The problem is, there's always one more frenetic utterance following, and then another, and another.  This flow isn't a murmuring brook, it's Niagara Falls. 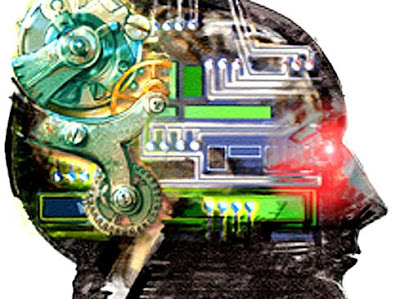 So it was with some astonishment that I read that our internal monologues might be part of how our brains shape our sense of self.  Recent research seems to indicate that without it, we are completely severed from our personhood, left unmoored, without a way to anchor our consciousness to our surroundings.

The whole thing is the subject of a 2015 film by Guillermo F. Flórez called Speechless, which investigates the lives of three stroke victims who have developed some form of aphasia, a loss of the ability to speak coherently.  One of them, Tinna Phillips, was fluent in six languages -- but suffered a stroke in her 30s that left her with Broca's aphasia, the inability to string words together into sensible sentences.    Even now, almost twenty years later, she still has trouble expressing herself.  "I cried inside, because I cannot communicate," Phillips said.  "My mom, others, Chinese!  I don’t know.  Is not communicate, nothing.  I, six languages, gone!"

What is even more remarkable about Phillips's case, however, is that the stroke completely stopped her internal monologue.  Where once she had the random thought patterns we all have, now she has... silence.  And that silence has in a deep fashion divided her from the context in which she lives her life.

We talk to ourselves, American philosopher Jerry Fodor says, to create an internal representation of our world, and without that, it's difficult to function.  "There is a gap between the mind and the world, " he writes, "and (as far as anybody knows) you need to posit internal representations if you are to have a hope of getting across it.  Mind the gap.  You’ll regret it if you don't."

Psychologist Alain Morin goes even further.  He writes, [I]nner speech is the main cognitive process leading to self-awareness.  That is, self-talk allows us to verbally identify and process information about our current mental experiences (e.g., emotions, thoughts, attitudes, goals, motives, sensations) and other personal characteristics such as personality traits, behavior, and appearance.  At an even higher level, I suggest that our internal dialogue is also what makes us aware of our own existence: 'I’m alive and well; I’m a unique person with an identity; I have goals, aspirations, and values.'"

As far as what its ultimate purpose is, Morin speculates that it has something to do with recognizing our own personhood and continually evaluating and reevaluating our own place in the social milieu.  Inner speech makes it possible to communicate and develop a relationship with ourselves.  "We can talk to ourselves as if we were speaking to someone else," he writes.  "In this process we can reproduce for ourselves appraisals we get from others.  For example, we can say to ourselves 'You’re very strong,'emotional, lazy,' etc., 'Why did you do this?  Because…', 'You take yourself way too seriously!', 'I feel anxious', and so on.  Talking to ourselves that way most certainly makes us self-aware and helps us identify self-information."

Which is fascinating.  I wonder how animals without spoken language see the world, and their place within it.  Do dogs have a sense of self?  Do dolphins?  How can you encode your world without language?  Our understanding of ourselves and our context is so tightly tied up in language, both internal and external, that it's hard to imagine even having thoughts without their being embedded in words.

So as annoying as my inner voice is, I suppose it's better to have it than not.  I just hope that my monologue's neurotic nature isn't equally evident in my external personality, although that would explain why I so seldom get invited to parties.

And now I need to go eat something, because I'm tired of hearing "I'm hungry" over and over.
Posted by Gordon Bonnet at 2:41 AM