Most of you probably know the name of Martin Shkreli, the pharmaceuticals executive who became notorious for raising the price of an anti-HIV drug his company manufactures from $13.50 per tablet to $750.  Once caught, he was completely unrepentant, claiming that the price hike resulted in cash that could be put into additional research, which would be "a great thing for society."  Not so great a thing for people who are HIV-positive, of course, but he doesn't seem unduly bothered by that.  Morals don't seem to be Shkreli's strong suit; besides his dubiously ethical practice of jacking up drug prices so as to squeeze the maximum profit from the ill, he was also arrested for securities fraud last year and is currently out on bail pending trial.

He is also notable for having a cocky, self-satisfied smirk so infuriating that it would probably induce the Dalai Lama to punch him in the jaw. 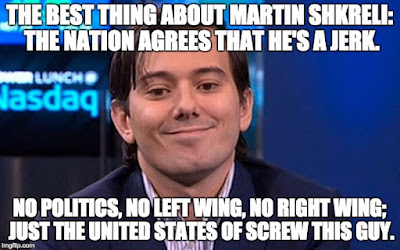 The trouble is, his arrest and upcoming trial have nothing to do with his practice of pricing life-saving drugs out of the reach of all but the very rich.  Worse, he's certainly not the only one in the pharmaceuticals industry doing this, he's just the most visible (and irritating) face of the problem.  Whatever happens apropos of his trial for securities fraud, Shkreli and his profit-above-everything-else motive are going to be difficult to eradicate, given that it's not illegal to sell products at an exorbitant rate in a capitalist society, however unethical it might be.

Which is why a group of Brooklyn witches have taken matters into their own hands, and put a curse on Shkreli.

The spokeswitch for the group, who goes by the name  "Howl," said that she doesn't hex people lightly.  "If I do go to this extreme, it’s to ensure that someone who is doing wrong is held accountable and pays for their wrongdoing, rather than because I just don’t like someone," Howl said in an interview with The Daily Dot.  "Like, this person will get away with doing so much harm.  And I can’t do anything in a financial way, the systems of capitalism alienate the poor from any measure of justice or assertion of voice and power, so what can I do?  And this is one method."

Howl and her friends aren't messing around, either.  They made a wax statue of Shkreli, and then let each of the witches take a shot at hexing it.  "We sent the effigy around the circle and each person anointed a different part of the effigy and expressed their desire for the type of hex they’d like to enact,” Howl explained.  "For example, someone anoints the head and says they hope the ego dies, that Martin Shkreli gets over his ego and realizes the damage that he’s done and makes amends.  Or they’d hex where you’d keep your wallet and says they hope he pays financially for the financial damage he’s done to other people."

Me, I'd like to see a spell that would freeze his facial muscles into a permanent scowl, so I'd never have to see him smirking at federal prosecutors again.  Others have suggested that it might be more appropriate to magically teleport HIV into his bloodstream, and then charge him $750 per tablet for his medication.

Unfortunately, I don't think any of this will work, for as Tim Minchin put it, "Throughout history, every mystery that has ever been solved has turned out to be... not magic."  But I have to say, skeptic though I am, if it comes to a choice between Howl and Martin Shkreli, I'm siding with Howl.  However ineffective her methods almost certainly are, her heart is in the right place.  "Some folks I know live with AIDS, and others rely on the medication, so that price tag is absolutely uncalled for and ridiculous," she said.  "I know systemically it’s not only him.  But he is a very visible part of this."

Which is it exactly.  So as far as the Brooklyn witches go, my response is: carry on.  I'd also encourage the Dalai Lama to take a crack at Shkreli, if he's feeling up to it.
Posted by Gordon Bonnet at 2:08 AM