It's been a while since we've had a new bizarre alt-med claim to poke fun at, so I was delighted when a loyal reader sent me a link yesterday to a site for something called "Starfire Water."

What is "Starfire Water," you might be asking?  Let me allow the website to speak for itself:

So we're starting off the right way, with the mention of "quantum."  Everything in alt-med has to be "quantum."  As far as the rest, it appears to me that the writer of the above paragraph came up with this text by opening the glossary of a college chemistry text and pointing at random words, then stringing them together into sentences.

So then we get to find out how "Starfire Water" is made, and that adds a whole new layer of wacky woo-woo pseudoscience to the mix:


Our process utilizes a centrifugal vortex to implode the water and set the water in motion for several hours. This reorganizes the molecular order into a receptive state to receive high frequency vibration. The water is then passed through a chamber where magnetic resonance imprints a series of frequencies in an infinitely modulating sequence. Molecular order and frequency loading mutually reinforce each other to maintain the transformation of the water.

The result is a liquid with the water formed into small, biocompatible water crystals that resonate at a designed and predictable frequency. The specific frequencies of the crystalline structured water solution are designed to be amplified by the cells of the human body, and transferred through resonant paths to tissues in need of “tuning”.

So, let's see here.  We have:
But one more thing bears relating, which is the diagram that shows the highly scientific method they use to make this stuff: 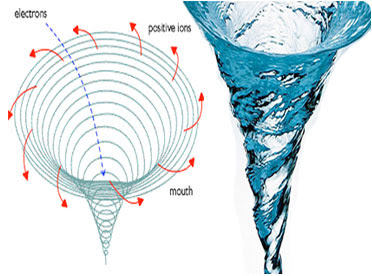 So evidently electrons get sucked down whirlpools, and positive ions get flung out of it, or something.  But at least now we know how the water is "imploded in a centrifugal vortex."

What this product appears to be is mineral water that they spin around for a while and then sell for six dollars a gallon to unsuspecting gullible types.  And there are a good many gullible types, apparently; even their Facebook page has been "liked" 3,960 times, probably because they make a point of telling us that their water is "treated with S.S.R.T. , Sacred Sound Resonance Transmission, making it the world’s finest premium Cell Ready performance 'living' hexagonal water ever produced."

Which you have to admit sounds pretty impressive.

So that's our dip in the deep end of the ordinary-water-filled pool for today.  Spending an hour pawing through the nonsense on this site -- and believe me, what I've written here represents only the barest fraction -- is making me consider giving up on water entirely.

At the moment, I'm thinking of switching to scotch.
Posted by Gordon Bonnet at 2:06 AM