I'm sure I have my fair share of cognitive biases, but I have understood from a tender age that the universe is under no particular obligation to operate in such a way as to conform to my desires.

This is why the tendency of many politicians to claim that climate change isn't happening because it doesn't fit with their jurisdiction's economic goals strikes me as bizarre.  I can understand being dismayed to find out that fossil fuel use is screwing with the climate.  I can understand the no-win situation communities are in when their entire economic base depends on coal, oil, or gas.  I can even understand why an elected official would be reluctant to bring such bad news to his or her constituency.

What I cannot understand is what is to be gained by pretending that because it's bad news, it doesn't exist. 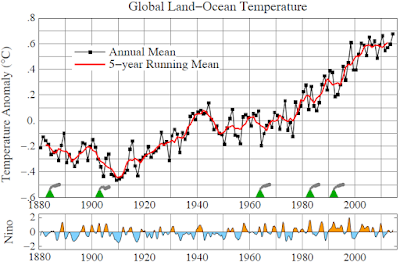 This is a point that apparently has slipped right past policymakers in West Virginia, who voted last Friday to block new public school science standards because they require teaching the causes, effects, and predicted outcomes of anthropogenic climate change.

In a statement to the Charleston Gazette-Mail that should go down in the Annals of Bullshit, Delegate Jim Butler said, "In an energy-producing state, it’s a concern to me that we are teaching our kids potentially that we are doing immoral things here in order to make a living in our state."

I just have one question for you, Mr. Butler: why do you think that the universe gives a rat's ass about whether you live in an "energy-producing state?"  Neither hard data nor the laws of science (nor, for that matter, standards of ethics and morality) are obliged to conform to your state's economic needs.  But then Butler went on to add, "We need to make sure our science standards are actually teaching science and not pushing a political agenda."

I suppose that refusing to teach public-school students what the scientists are actually saying, because you live in an "energy-producing state," doesn't constitute "a political agenda."

Delegate Frank Deem, however, concurred with his colleague. "There’s nothing that upsets me more than the idea that it’s a proven fact that climate change is man made," he said.

Because apparently, science is only valid if it doesn't make Delegate Frank Deem upset.

The bill now goes to the West Virginia Senate, which evidently also believes that research should be ignored if it hurts Deem's and Butler's feelings.  The Senate Chair of the Education Committee, Dave Sypolt, said, "As it stands right now, I have no problems with it at all.  I’m going to work it and send it right through."

Look, I know that in a state like West Virginia, where the economy has long been based on coal production, the scientific findings are seriously bad news.  And it is entirely unclear what solutions could be found that won't leave whole communities without jobs or sources of income.  But what they're doing right now is tantamount to a guy in Pompeii in August of the year 79 C. E. saying, "Okay, yeah, I see that the volcano is smoking.  But you know, that could mean anything.  The scientists don't all agree that Mount Vesuvius is going to erupt.  We've been living here for decades and nothing has happened but some minor earthquakes and plumes of steam.  The idea of moving everyone just because of a possible threat is really upsetting to me.  Anyone who says so must have a political agenda to destroy Pompeii's economy."

And outside, the crazy weather continues.  Maryland has been repeatedly clobbered by snowstorms, while hundreds of miles north in upstate New York we basically had no winter -- we had a couple of quick cold spells, but I went running in shorts and a tank top several times in January.  The Arctic sea ice has never been this low at this time of year since measurements were first taken. Globally,  2015 was the hottest year on record, breaking the previous record that was set in 2014, which broke the previous record set in 2013, and so on and so forth.

As James Burke puts it, "You don't need a Ph.D."  But I shouldn't mention that, because it will probably would wound Delegate Frank Deem's feelings again.

So the bottom line is: the science is sound, whether or not you choose to teach public school students about it.  We can discuss what measures can and/or should be taken to mitigate the effects of climate change.  In order to be effective, such measures would have an undeniable human cost, and would undoubtedly cause economic havoc in many places.  But what is also certain is that sitting on our hands is going to cause havoc, too -- havoc of a much more devastating, global, and permanent kind than anything the West Virginia legislature can conceive.
Posted by Gordon Bonnet at 1:55 AM