I'm not a big believer in schadenfreude -- taking pleasure in other people's misfortune.  The habit of compassion is just too strongly ingrained in me.  But there are times that a person who richly deserves it receiving swift comeuppance is simply impossible to ignore.

Take, for example, the West Virginia lawmakers who passed a bill last week to legalize the sale of raw milk.  Raw milk was eliminated from the market in 1987, when the FDA mandated the pasteurization of all milk and milk products.  For good reason; there are a lot of bacteria in raw milk, and in fact the consumption of raw milk was a major pathway for the transmission of such horrible diseases as brucellosis and tuberculosis.

The FDA's statement on the topic is unequivocal:


Milk and milk products provide a wealth of nutrition benefits. But raw milk can harbor dangerous microorganisms that can pose serious health risks to you and your family. According to an analysis by the Centers for Disease Control and Prevention (CDC), between 1993 and 2006 more than 1500 people in the United States became sick from drinking raw milk or eating cheese made from raw milk. In addition, CDC reported that unpasteurized milk is 150 times more likely to cause foodborne illness and results in 13 times more hospitalizations than illnesses involving pasteurized dairy products.

Raw milk is milk from cows, sheep, or goats that has not been pasteurized to kill harmful bacteria. This raw, unpasteurized milk can carry dangerous bacteria such as Salmonella, E. coli, and Listeria, which are responsible for causing numerous foodborne illnesses.

These harmful bacteria can seriously affect the health of anyone who drinks raw milk, or eats foods made from raw milk. However, the bacteria in raw milk can be especially dangerous to people with weakened immune systems, older adults, pregnant women, and children. In fact, the CDC analysis found that foodborne illness from raw milk especially affected children and teenagers.

But there are always people who are (1) doubters of hard science, and (2) resent any government interference in their god-given right to do stupid stuff.  And when these two characteristics meet, we have problems.

So the lawmakers in West Virginia passed their bill allowing the sale of raw milk, and the delegate who sponsored the bill, Scott Cadle, decided to toast their success by drinking some.

The whole lot of them were laid low a day later by nausea, vomiting, and diarrhea. 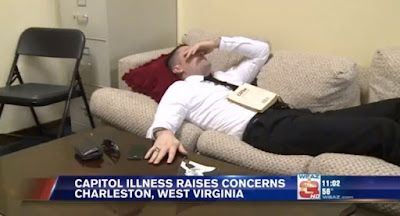 Of course, that's not enough for people who ignored all of the FDA's warnings to begin with.  Delegate Pat McGeehan, in between elbowing his fellow lawmakers out of the way to reach the bathroom in time, said, "I highly doubt raw milk had anything to do with it, in my case."

I think if I had to choose my least favorite common contagious disease, it would have to be stomach flu.  Fortunately, I don't get it often, but the time I had it the worst -- a never-to-be-forgotten twelve hour period of presumed food poisoning in Belize -- I would have happily jumped off a cliff to end my misery, had I had the strength to do anything other than kneel on the floor with my face in the toilet.  But even so, I have to admit I laughed when I read about this.  It's all very well to rail against government regulation, and I actually agree that governments often go way overboard in trying to license and regulate and restrict damn near everything.  (Take, for example, a law still on the books in Philadelphia that requires bloggers to purchase a $300 business privilege license, a practice that puts 99% of bloggers in the red.)

On the other hand, there are some regulations that are there for a reason, and the restrictions on selling unsafe foods are among them.  And as far as the sick West Virginia delegates, I hope they're all feeling better by now.

But I still think it's kind of funny.
Posted by Gordon Bonnet at 2:02 AM