Two of the many things I do not understand have to do with fake faith healers (not, in my opinion, that there's any other kind).

The first is how, after a fake faith healer gets caught at his game, he has the gall to ignore the fact that he was caught in a lie, and do the same thing again.  If I were taking people's money by claiming I could do magic, and I got nailed as a phony, I would be so humiliated I would never want to show my face in public again, much less stand up in front of a sellout crowd and shout, "Jesus is acting through me to heal you (despite what you may have heard from my detractors)!"

The second thing is how there can be sellout crowds after someone is uncovered as a fraud.  Are people really that gullible?  Is I-Want-To-Believe really that powerful a driver?

The answer to both questions is provided by none other than Peter Popoff.  Popoff, you might recall, is a hands-in-the-air hallelujah-praise-be type of televangelist, who claimed to be getting messages from god but turned out to have been getting them from his wife via an earpiece.  Besides being clued in on names, illnesses, and other personal details about the people in the audience, Popoff also received edifying messages like "Keep your hands off her tits... I'm watching you."

And although the evangelicals do think that god is obsessed with telling people not to have sex, I kind of doubt that's the way the Almighty would have phrased it.

In any case, it is a bit of a shock to find that Popoff's back.  Again.  There was some indication last year that he had returned to his faith healing game, but now he's going at it a different way, by sending people letters claiming they're going to receive lots of money, if only they'll use his "Miracle Spring Water" (a packet of which is sent with the letter), and, of course, send Peter Popoff a donation.  Here's an excerpt of a letter received by one Mark Smith and turned over to authorities (which you can read in its entirety here):


What I have to tell you deals with a powerful sequence of events that will begin unfolding for you in the very near future... I see in the vision of the Lord a series of "Golden Miracle Manifestations" happening for you, Mark, in rapid succession, bringing you phenomenal wisdom, success, prosperity, happiness, and an abundance of supply...

During the first manifestation I see a sudden release of money.  This financial influx is showered upon you from a totally unexpected source.  I cannot say exactly what the total amount will be, but it is somewhere between £2,700 and £27,000...  It is possible that you will receive much more...

You will notice that there is a SECOND SEALED ENVELOPE enclosed with this letter.  In that envelope there is: (1) a packet of miracle spring water for you to use; (2) another faith tool that will completely foil Satan's attempt to hinder you and stop your miracle manifestations; (3) an anointed prophecy for you to read out loud...

Quick now, while God's spirit is moving upon you, release your best financial seed-gift.  Don't let Satan hold you back any longer.  This is your opportunity to take your best action of faith that you can towards your secret miracle pathway that only God can uncover.  Right now, give Him your best gift of £27.00 or more.  There's something about £27.00 that so often releases your faith.

He's then told that if he misses the first "manifestation," god's done with him -- there won't be any others forthcoming.  "Don't let Satan make that happen," Popoff tells him.  So send lots of money right away.  The more the better.

This is apparently only one of 34 different letters that Popoff's sent out recently, asking for cash for miracles -- letters that differ only in their details.  "Send me money, or Satan wins" is the theme of all of them. 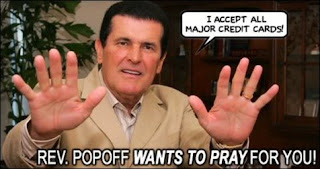 And you know that some people will.  There's something about this man that makes common sense and critical thinking go right out the window.

I have to wonder, though, if he may have crossed the line into a prosecutable offense.  I'm no legal expert, but isn't this mail fraud?  Maybe not -- it's not like "miracle manifestations" are a real commodity.  But dammit, there should be some way to stop this guy from ripping people off, preying on credulity and misplaced faith to rake in money hand over fist.

The sad part, though, is that even if he's arrested and prosecuted, he'll just bounce back.  Look at Jim Bakker.  Look at Jimmy Swaggart.   You can't, apparently, keep a bad man down.

Or as P. T. Barnum put it, "There's a sucker born every minute."