I've never really understood people who pine for "the good old days."  I'm not saying that the time we live in is perfect, mind you; but I find that real nostalgia requires a very selective memory.

This comes up because of Donald Trump's slogan, "Make America Great Again."  Someone finally thought to ask him when he thought America was great the last time -- in an interview in the New York Times, Trump was asked what era he'd like to return us to.  His answer is as myopic as it is enlightening:


I'd say that the first time would be the time of military and industrial expansion at the start of the 20th century.  If you look back, it really was, there was a period of time when we were developing at the turn of the century which was a pretty wild time for this country and pretty wild in terms of building that machine, that machine was really based on entrepreneurship...  And the late '40s and '50s, it was a time when we were not pushed around, we were respected by everybody, we had just won a war, we were pretty much doing what we had to do.

It's no real wonder that Trump looks back with fondness at the first part of the 20th century.  It was the era of the Robber Barons -- people like John Jacob Astor, Andrew Carnegie, Andrew W. Mellon, James Buchanan Duke, Leland Stanford, and Cornelius Vanderbilt, who became rich on the backs of the working poor.  The actions of the Robber Barons represent the beginning of corporate control over the government.  It was an era of unbridled free enterprise, which sounds good until you see the outcome -- a veritable plutocracy that continues up to this day. 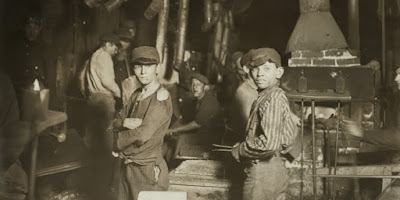 Similar things could be said about the post-World War II United States, a time in which we became a nuclear power, had our fingers in the governments of other countries (either by their invitation or not), and were setting ourselves up for the debacles in Southeast Asia and the Middle East of which we are still dealing with the consequences.  It was the last time the white patriarchy would go unchallenged, and was immediately followed by the civil unrest of the 1960s, in which so many institutions, social mores, and political edifices would be shaken to their roots.

So of course those are where Trump would like to return us -- to a time when there was unprecedented opportunity, as long as you were a rich, white, well-connected man.  If you were female, if you were a minority, if you were from the lower classes, well, pretty much sucks to be you.

I'm too young to remember the 50s, but I certainly remember the 60s and 70s well enough.  I grew up during the decades when we as a society were still struggling with throwing off enculturated rules of a social structure that prior to that time had been accepted without question.  When I was in high school, in the mid-70s, minorities were beginning to see more acknowledgement of their fundamental human rights -- but the powers-that-be were so terrified of the outcome that on Prom Night, they decided to crown a black Prom King and Queen and a white Prom King and Queen, because what if they had only one vote, and there was (gasp of horror!) a black King and a white Queen?  Can't have that.  There were several classmates of mine who were LGBT, but 100% of them were still in the closet -- some until years after graduation.

Boys couldn't have long hair, or they'd be brought into the principal's office and have it cut off.  Girls were tracked into home ec, boys into shop.  One female friend told me, years after, that she was told not to take physics by her counselor, because "why would a girl need physics?"  Fortunately for her, she basically told him "the hell you say," and took it anyway.

So the "good old days" turn out to have been good only for the select few.  To claim otherwise requires ignoring not only our own history, but the day-to-day reality of the vast majority of American citizens.  But it's not surprising that Trump turns a blind eye to the inequities of the 20th century; he, and people like him, are the ones who profited from them.

Despite the problems we face, I'll stay right here in the 21st century.  I'll take the growing pains and risks and uncertainties of 2016 over the unquestioned white male privilege of the Gilded Age and the post-World War II eras.  I have no particular desire to don the rose-colored glasses that would be necessary to look back in sentimental nostalgia at a period when things were not nearly as good for everyone as people like Trump like to claim.
Posted by Gordon Bonnet at 2:03 AM