Outnumbered by the extremes

Some years ago, I remember being struck by a quote about democracy from C. S. Lewis when I read his book The Weight of Glory.  While I don't accept a lot of his premises, I think his argument has merit:


I believe in political equality.  But there are two opposite reasons for being a democrat. You may think all men so good that they deserve a share in the government of the commonwealth, and so wise that the commonwealth needs their advice.  That is, in my opinion, the false, romantic doctrine of democracy.  On the other hand, you may believe fallen men to be so wicked that not one of them can be trusted with any irresponsible power over his fellows.

When the democratic system works, it is because the votes of a few lunatics or extremists are outweighed by the votes of the (presumably more reasonable) average citizen, and good sense prevails.

The problem is, the whole thing falls apart when the extremists become so good not only at spreading their message but at demonizing the opposition that voters pledge themselves to people who are, to put not too fine a point on it, insane.  Then you find the system sowing the seeds of its own destruction, when by some unimaginable co-opting of the process, someone truly horrible ends up getting elected to office.

And no, I'm not talking about who you probably think I'm talking about.  The person I have in mind is Mary Lou Bruner, leading candidate for a seat on the Texas State Board of Education.

Bruner has established over and over again that she has a screw loose.  Below are a few of her more bizarre pronouncements.


Obama has a soft spot for homosexuals because of the years he spent as a male prostitute in his twenties.  That is how he paid for his drugs.  He has admitted he was addicted to drugs when he was young, and he is sympathetic with homosexuals; but he hasn’t come out of the closet about his own homosexual/bisexual background.

On the Kennedy assassination:


Many people believe the Democrat Party had JFK killed because the socialists and Communists in the party did not want a conservative president.  Remember who followed JFK as president — (LBJ).  The exact opposite of Kennedy — a socialist and an unethical politician.  It does seem like this might have been the master plan: They sneaked the bad guy (LBJ) into the administration on the coat-tail of a good guy (JFK).  Then they got rid of the good guy; in the end, they got a socialist president which is what they originally wanted.

On paleontology and the geological history of the Earth:


When the flood waters subsided and rushed to the oceans there was no vegetation on the earth because the earth had been covered with water…  The dinosaurs on [Noah’s ark] may have been babies and not able to reproduce…  After the flood, the few remaining Behemoths and Leviathans may have become extinct because there was not enough vegetation on earth for them to survive to reproductive age.


Climate change has nothing to do with weather or climate; it is all about system change from capitalism (free enterprise) to Socialism-Communism.  The Climate Change HOAX was Karl Marx’s idea.  It took some time to “condition” the people so they would believe such a ridiculous HOAX.

On the United Nations:


In regards to a statement I made about the United Nations wanting to reduce the population of the USA from 325 million to 125 million the question was asked to me: So how do you think the government and the UN plan to do away with 200,000,000 people from the United States under the agenda 21 plan?

This was my answer: when the people die the government does not want them to be replaced.  That is how they propose to reduce the population from 325 million to 125 million.  They plan to use Obamacare to make sure people die a little sooner than they would have died.  When elderly people with heart problems or diabetes have to wait months to see a doctor, they die before their appointment comes around.  When the government says they cannot have the operation or the medicine they need they die sooner than they would have if they had gotten the operation or the medicine they needed.  The government may get to the point where it starts euthanizing people.  Part of Obamacare is to ask elderly people if they think their life is still worth living now that they can no longer get around well, or now that they are in a wheel chair, or now that they can no longer control their bladder or other functions, or now that their hands are not steady enough to feed themselves.  Some people become depressed and say that their life is not worth living under those conditions and that is just what the government wants to hear.  Those elderly people are not going to last long once the government gets their signature on that piece of paper.  There also will be more abortions paid for by the government.  Abortion is a method of reducing the population.

And last but not least, on school shootings:

This woman is now widely expected to win an election to the board that oversees public education in one of the most populous states in the United States.

The problem is, the Republican party has encouraged this sort of free-floating fear talk and religious mania for quite some time.  Witness the angry, America-is-being-destroyed-before-your-eyes railing of people like Ann Coulter and Rush Limbaugh. Fox News has for years been notorious for scary talk about Wars on Christmas and President Obama Coming To Steal Your Guns. Only now are there level-headed conservatives who are coming to the horrid realization that the message that they have been pushing has come back to bite the entire party in the ass, in the form of paranoid loons like Bruner standing a good chance at becoming a leading voice in driving educational policy in Texas -- and the Republican nomination for president being a contest between a loud-mouthed, fact-free neo-fascist and a religious nutjob who is so reviled by members of his own party that one of them said, "If you killed Ted Cruz on the floor of the Senate, and the trial was in the Senate, nobody would convict you." 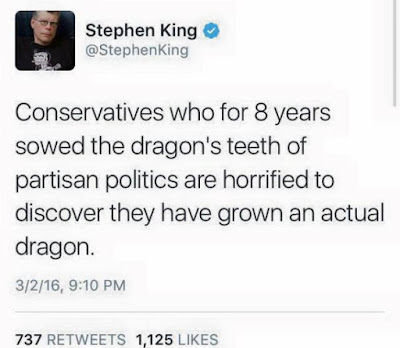 The problem is, now that this snowball has been set in motion, I'm not sure what can be done about it.  The Republican old guard, apparently appalled that they might end up having to face either backing Donald Trump as presidential nominee, backing a Democrat, or not endorsing anyone, have tried to stage a last-ditch effort to block Trump from getting the nod, an effort which is almost certain to fail.  But the problem goes deeper than a man who is politics' answer to a carnival sideshow barker being a stone's throw from the presidency.  This embracing of extremist rhetoric has colored races all the way down to the local level.

How else could you explain that a certifiable whackjob like Mary Lou Bruner is predicted to garner the support of over 50% of Texas voters?

I don't know what could be done to return the United States to a position where rational dialogue was happening, or even possible.  The screeching of the extreme sides of both parties has done nothing but deepen distrust of our fellow citizens -- not to mention making it more likely that Lewis's view of democracy, that the votes of the reasonable majority would outweigh the votes of the unreasonable fringes, is unlikely to be realized any time soon.
Posted by Gordon Bonnet at 2:06 AM