One of the inevitable downsides of a blog such as this one is that I tend to focus on negative stuff.  People who believe (and peddle) nonsense, charlatans, hoaxers, dupers, swindlers, and thieves.  And the world being what it is, a sizable percentage of the aforementioned no-goods never get caught, never get stopped, never have to recompense their victims what they've stolen.

Today I'm going to look at a case where the good guys won.  The story, which was sent to me by a friend and loyal reader of Skeptophilia, starts out like so many of the others -- but then ends on a happy note.

The scam was the brainchild of one Benjamin Rogovy of Seattle.  It was a website called "Christian Prayer Center," where you could sign up to have prayers said for you (or for a friend or loved one) -- as long as you donated.

More insidious still was that if you signed up and gave Rogovy your credit card information, you were put on a list for "continued prayers," and billed monthly -- unless you specifically clicked "No, Thank You."  And as you may have experienced with other such auto-bill sites, once you were on the monthly billing list, getting off of it wasn't easy.

Complaints began to roll in, some coming from as far away as Singapore.  Unfortunately, there was little the authorities could do.  Because the Christian Prayer Center was a licensed business, and it's hard to see how you could claim that you hadn't gotten what you'd paid for (no one said your prayers were going to be answered, after all), Rogovy was making money hand over fist from people who were either desperate or gullible or both.

Finally, however, Rogovy stepped over the line by including fake testimonials and made-up religious leaders as a way of increasing his take.  And it worked, for a while; records show that he raked in $7.75 million from over 165,000 people over a period of three years.  Hard as that is to believe.  But once the false information started showing up, that gave Washington Attorney General Bob Ferguson leverage to go after the sly bastard.

And he succeeded.  Last week, as part of a settlement, Rogovy agreed to return millions of dollars to the people he'd bilked.  "What I will not tolerate," Ferguson said in a statement, "is unlawful businesses that prey upon people —taking advantage of their faith or their need for help— in order to make a quick buck."  A Facebook page appeared called "Christian Prayer Center SCAM" warning people away from the site.

People seeking a refund for money they've sent to the Christian Prayer Center and its sister site, Orcion Cristiana, have until June 12, 2016 to file a claim with the Attorney General's office.

The one cloud behind all of this golden lining is that people like Rogovy rarely ever go away.  As we saw this week with Peter Popoff, the lure of relieving the faithful of their filthy lucre is simply too tempting.  Until the Attorney General's office mandated that it be shut down, the Christian Prayer Center's website had a sanctimonious message stating, "We thank you for all the prayers, and we cherish the opportunity to have created a place where Christians could meet to support each other."  As of the writing of this post, the Center's Facebook page was still up, with a pinned post at the top of the feed saying, "If the Christian Prayer Center adds value to your lives and you think online prayer is important, please type "Yes" or "Amen" to our wall!  We love to hear praise reports and testimonials," and the following image: 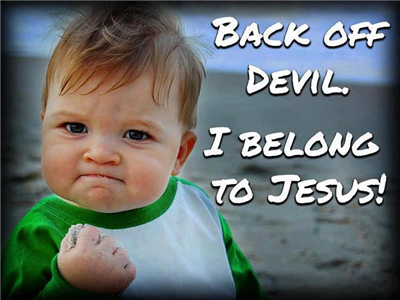 Because apparently the answer to "What Would Jesus Do?" is "use false claims to take money from people and claim he's praying for them, but actually doing nothing."

So it's to be hoped that the judgment against Rogovy will put a stop to the money pouring into the Christian Prayer Center.  The problem is, of course, that even if this puts Rogovy out of business, there's always another swindler waiting in line.

If there's a sucker born every minute, as P. T. Barnum observed, there are probably two thieves born in the same amount of time.
Posted by Gordon Bonnet at 1:46 AM