At what point does choosing to ignore the facts cross the line into being morally responsible for what happens?

Because I think we've reached that point with respect to climate change.

Folks, we've been warning people about this since the early 1980s.  James Burke's seminal documentary After the Warming first aired in 1989, and predicted not only the dire consequences of anthropogenic climate change, but the resistance of the powers-that-be to doing anything to halt it.  (If you watch it now, many of its predictions sound like history -- his timeline for what was going to happen from 1990 to the present came so eerily true that it almost makes me want to believe in precognition.)  However much Al Gore is derided for his politics, his 2006 film An Inconvenient Truth has also proved to be prescient.

Scientific paper after scientific paper -- peer-reviewed, based in hard data -- has demonstrated incontrovertibly that our world is warming.  There is no controversy amongst the climate scientists any more.  And still we shrug our shoulders at politicians who brand climate change as "liberal claptrap" (Representative Dana Rohrabacher of California), or those who say that if it's real at all, it will be "beneficial to society" (Senator James Inhofe of Oklahoma).  Scientists who research climate have faced gag rules, funding cuts, and harassment from the likes of Representative Lamar Smith of Texas, who somehow, bafflingly, has ended up chairing the House Committee on Science, Space, and Technology.

This all comes up (again) because of a study by Columbia University climate scientist James Hansen et al., who last week released a paper in the Journal of Atmospheric Chemistry and Physics that is rightly scaring the absolute shit out of anyone capable of reading a scientific paper (thus disqualifying Rohrabacher, Inhofe, and Smith).  The title of the paper is unequivocal: "Ice Melt, Sea Level Rise and Superstorms: Evidence From Paleoclimate Data, Climate Modeling, and Modern Observations that2◦C Global Warming is Highly Dangerous."  (Note: the link is to a draft released last year; the paper itself appeared after extensive peer review, and with only minor modifications, in JACP last Tuesday.) 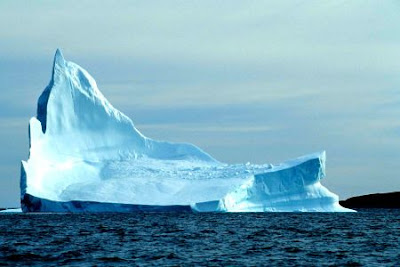 [image courtesy of photographer Angskar Walk and the Wikimedia Commons]

If the title by itself doesn't spook you enough, take a look at this excerpt from the abstract:


There is evidence of ice melt, sea level rise to +5–9 m, and extreme storms in the prior interglacial period that was less than 1 ◦C warmer than today.  Human-made climate forcing is stronger and more rapid than paleo forcings...  We argue that ice sheets in contact with the ocean are vulnerable to non-linear disintegration in response to ocean warming, and we posit that ice sheet mass loss can be approximated by a doubling time up to sea level rise of at least several meters.  Doubling times of 10, 20 or 40 years yield sea level rise of several meters in 50, 100 or 200 years... Ocean surface cooling, in the North Atlantic as well as the Southern Ocean, increases tropospheric horizontal temperature gradients, eddy kinetic energy and baroclinicity, which drive more powerful storms...  Recent ice sheet melt rates have a doubling time near the lower end of the 10–40 year range. We conclude that 2 ◦C global warming above the preindustrial level, which would spur more ice shelf melt, is highly dangerous.  Earth’s energy imbalance, which must be eliminated to stabilize climate, provides a crucial metric.

Co-author Eric Rignot put it more bluntly in an interview with Slate:


Ice sheet loss is non linear by nature.  You push the ice sheet one way, they do not react; you push them more, they start reacting; you keep pushing and they fall apart...  If we get there, we won't be able to fix it.

Among the scarier predictions of the Hansen et al. paper is a sea level rise of five to nine meters.  Do you recognize what this means?  The states of Florida, Delaware, and most of southern Louisiana would be underwater.  As would the nations of Bangladesh and the Netherlands.  All of the world's coastal cities would be inundated, with the exception of a few that have higher ground, like Seattle and San Francisco -- which would then become a string of islands.  This isn't talking about frost-free winters and warmer summers, and having to run your air conditioner more; this is talking about turning a significant proportion of humanity into eco-refugees.

Climate scientist Anna Liljedahl, of the University of Alaska, has said that the trends she's seeing are evidence of runaway warming.  The situation in the Arctic is dire.  The permafrost is experiencing widespread melting, with a resultant additional contribution of carbon dioxide and methane into the atmosphere:


The scientific community has had the assumption that this cold permafrost would be protected from climate warming, but we’re showing here that the top of the permafrost, even if it’s very cold, is very sensitive to these warming event...  At the places where we have sufficient amounts of data we are seeing this process happen in less than a decade and even after one warm summer.

We have reached the point where ignoring the facts and ignoring or ridiculing the predictions of the people who are trained to understand the Earth's systems is a profoundly immoral stance.  There's a principle from Roman law that applies here: "Qui tacet consentire videtur, ubi loqui debuit ac potuit."  "Those who remain silent, when they should have spoken up, may be considered to have agreed."  If you support politicians who are complicit in hoodwinking the American citizenry with regards to the magnitude of this problem, you participate in that immorality and bear some of the responsibility for the outcome.

Which in this case, is increasingly looking like it will be horrific on a scale we have never seen before.
Posted by Gordon Bonnet at 3:00 AM