Tomorrow is Easter, the most important celebration of the Christian calendar, a time when believers are reminded about such things as eternal life and redemption and salvation.  Also, therefore, time for the wacko fringe element to remind everybody that they better not get their kids chocolate bunnies, because this will cause children to hippety-hop right to hell. 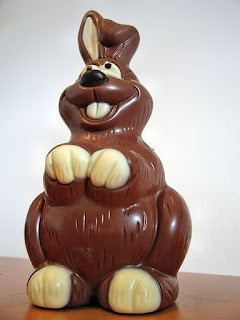 At least, this is the claim of "Shirlee" of the site Real Bible Stories, in her post "Easter Bunny Brings Satan's Communion."  And I'd like to be able to tell you that this is a parody site, but "Shirlee" appears to be entirely sincere.  Here's what she has to say:


Easter. For many, it conjures images of a basket-toting rabbit bearing chocolate bunnies. The White House hosts an Easter Egg hunt, as do many churches.  What’s wrong with that?  It’s a celebration of spring, and fertility, and...  Yes, fertility. I’ll bet you didn’t know Jesus was a fertility god, did you?

What’s that you say? He’s not?

Then why are you worshiping rabbits — an unclean animal, consumption of which is abomination to God — and hunting for colored eggs on the celebration of His Resurrection?

Yes, well, in Leviticus 11:6 the bible also says that rabbits "chew the cud," which they don't.  But don't let that stop you from taking the whole thing as the literal truth.

And wait until you hear who is responsible for this perversion... you'll never guess.


Yes, Catholics. The inheritors of the Babylonian religion, who have perverted every aspect of Christianity with the ways of Nimrod and Semiramis (Ishtar)!

Satan has found a very clever way of perverting Christianity...  He used the Catholic cult to inject his own rituals — those directed at any number of false gods, and even a false Savior — into Christian worship!  Think about it...  Whenever you idolize the Easter bunny, or trade eggs, or even fast at Lent, you are worshipping Satan!

Huh.  I was raised Catholic, and even back then, I was always in it for the chocolate.  But I suppose that's only to be expected from a former cult member who made it worse by giving up religion entirely.

"Shirlee" then goes into a long diatribe on the origins of Easter and how the "Catholic cult" (her words) has twisted the whole thing into a fast-track into hell.  She also more than once uses the phrase "Bunnies of Satan," which I think would be a great name for an all-girl metal band.

She ends with a scary question:


Will your kids be chomping on chocolate eggs and rabbits tomorrow, taking the Devil’s Communion?

In all seriousness, I find it hard to imagine living my life in such perpetual fear.  The idea that there's this evil guy who is constantly trying to find ways to grab you, and that even something like a Russell Stover Chocolate Bunny Rabbit could provide him ingress, is so horrid that if I believed it, I wouldn't want to leave my house.  Ever.

It does make you wonder what's appealing about this world view.  Once you've bought in, though, it's clear why people stay.  If you have let yourself become convinced that everything is a threat, and the only way to avoid burning in agony forever is to follow the bible word-for-word, it's unsurprising that it's difficult to cut free.

Unsurprising, too, that people like this get their knickers in a twist over anything that's different.  Which is why an elementary school in Kennesaw, Georgia has cancelled a yoga program designed for  alleviating student stress because parents thought it was "sorcery."  Kids and staff are now forbidden from saying "namasté" to each other.  One parent wrote:


Now we can’t pray in our schools or practice Christianity but they are allowing this Far East mystical religion with crystals and chants to be practiced under the guise of stress release meditation.  This is very scary.

Yes indeedy.  We don't want students de-stressed.  We want them scared.  We want them to be aware, 24/7, that anything they do, any tiny misstep, could potentially lead to their spending eternity in hellfire.

The administrators, of course, caved; no way could they push back against the people who raised the stink, because then you'd have Fox News blathering on for weeks about the War on Christianity even though Christians make up 55% of the population of Kennesaw.

So anyway.  Me, I'm just looking forward to next week, when all of the remaining Bunnies of Satan are gonna be on sale.  It may be the Devil's Communion, but it sure as hell is tasty.
Posted by Gordon Bonnet at 3:22 AM