The cult of ignorance -- and "do-it-yourself braces"

In his wonderful essay "The Cult of Ignorance," Isaac Asimov wrote something that still resonates, 36 years after it appeared in Newsweek: "There is a cult of ignorance in the United States, and there always has been.  The strain of anti-intellectualism has been a constant thread winding its way through our political and cultural life, nurtured by the false notion that democracy means that 'my ignorance is just as good as your knowledge.'"

This tendency on the part of Americans to assume that democracy means that all ideas are equal, and everyone's utterances equally valid, often drives us to do ridiculous things.  We discount the conclusions of scientists, preferring instead the evidence-free declarations of politicians, actors, and athletes.  The criticism "they don't understand the common, working-class people" is frequently lobbed in the direction of the intelligent.   This sense that the well-educated are either impractical or else actively evil leads us to elect the unqualified because they "seem like regular folks," even though you'd think we'd all want our leaders to be selected from the best and smartest we have.  But somehow there's this sense that being smart, well-educated, and thoroughly trained gives the experts an ivory-tower insulation from the rest of us slobs, and probably leaves them immoral as well.

What it actually accomplishes, though, is to give your average guy the idea that he knows a great deal more than he really does.  Called the Dunning-Kruger effect, it makes the unskilled overestimate their knowledge and underestimate their ineptitude.  And just yesterday, I ran into a new phenomenon that illustrates that amazingly well: do-it-yourself orthodonture.

I'm not making this up.  Put off by the high costs of orthodontic treatment, the inconvenience of having braces (sometimes for years), and the mystery of how a few brackets and wires could straighten out crooked teeth, people have said, "Hey, I could do that."  Now that 3-D printing is easy and cheap, people print themselves out resin brackets, affix them to their teeth with glue, and start yanking.  Lured by testimony that such a course of treatment could reduce the costs to under $100 and shorten the duration of brace-wearing from three years to as little as sixteen weeks, the idea has been spreading like wildfire. 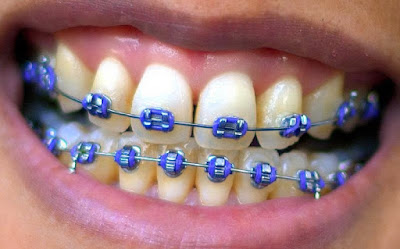 [image courtesy of photographer Jason Regan and the Wikimedia Commons]

But folks -- orthodontists have to go through extensive training for a reason.  It's not enough to peer in a friend's mouth and try to replicate the friend's orthodontic hardware on your own teeth.  One of the DIY-ers, a fellow named Amos Dudley, has posted pictures of his changed smile on the internet, an alteration that took only four months.  But orthodontist Stephen Belli says that looks can deceive:


I’d like to see an X-ray, because he’s probably caused some irreparable harm.  He moved these teeth in only 16 weeks.  You can cause a lot of problems with that.  If you move a tooth too fast, you can actually cause damage to the bone and gums.  And if you don’t put the tooth in the right position, you could throw off your bite.

And why did Dudley take on his own orthodontic work?  "Because," he said, "I wanted to stick it to the dental appliance industry."

A stance that apparently gave him the impression that he knew enough to start shoving around his own teeth.

I find this attitude impossible to understand.  I consider myself reasonably intelligent, but I know I'm not smart enough to be responsible for my own medical care.  Similarly, I know I don't have the training to understand the latest scientific findings in most fields, nor to come up with solutions to the nation's economic problems and foreign policy.  This is why we have experts.

Which is why it really pisses me off when someone comes up with the latest pseudo-clever meme about how to fix everything, such as this one: 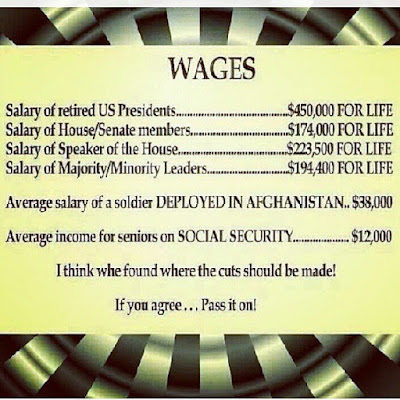 Then, using a similar calculation, figure out how much we'd save yearly by cutting the wages of retired presidents (of which there are currently four -- Carter, Bush Sr., Clinton, and Bush Jr.  You can even be generous and throw in Obama if you like), the House and Senate members (535 of them), the Speaker of the House (1), and the Majority and Minority leaders of each branch of congress (4), down to $50,000 each.  See how much you save.

Falls a little short, doesn't it?

I mean, for cryin' in the sink, people.  If it was that easy, don't you think someone would have thought of this by now?

Which may seem a long way from do-it-yourself braces, but it's all the same thing, really; the attitude that a completely untrained individual is just as good as an expert at solving complex problems.  The cult of ignorance is still thriving here in the United States.  But despite our desire to think that everyone's ideas are on equal footing, ignorance will never be as good as knowledge.
Posted by Gordon Bonnet at 2:03 AM