I get really fed up with the media.

I make a significant point in my Critical Thinking classes that there is no such thing as unbiased media -- that even the decision of what qualifies as news introduces a bias into reporting.  Add to that the slant that every news source has, and it underscores how important it is to take what you see, read, and hear with a big ol' pinch of salt.

But still.  There are times that poor reporting just pisses me off.  Take, for example, the story that appeared on KCEN-TV, out of Temple, Bell County, Texas last week, wherein we find out that a man in Tyler, Texas has found some fossils in his back yard that were deposited during the biblical Great Flood.

Tyler resident Wayne Propst was poking around in his aunt's front yard when he found some fossilized shells.  He cleaned them up with a toothbrush, then called a "fossil expert" named Joe Taylor who confirmed that they were from the time of Noah.

Propst was thrilled.  "From Noah’s flood to my front yard, how much better can it get?...  Now all I got to do is go in front of my aunt's house and pick up something from back when it all began.  I don't even have to search anymore.  What's really interesting to me is we're talking about the largest catastrophe known to man, the flood that engulfed the entire world."

Yes, and we're also talking about an event that left behind no geological evidence whatsoever, and therefore almost certainly never happened.  But don't let that stop you. 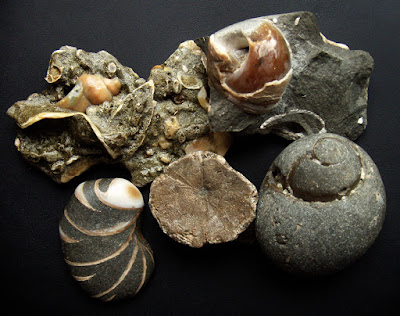 Propst's aunt, Sharon Givan, who owns the property where the fossils were found, was equally excited.  "To think that like he says that we have something in our yard that dated back to when God destroyed the earth.  I mean, how much better could anything be," Givan said.

Which brings up what is, to me, the most troubling thing about the whole Noah's Ark story.  This is supposed to be an edifying tale, right?  About a guy who listened to god and he and his family got saved from destruction?  But what the religious seldom focus on is that according to the bible, everything else on Earth died.  Animals, plants, infants, children, people from other cultures who had no part in what was happening.  It is, honestly, one of the most unpleasant stories in the entire bible (and there's a lot of competition in that regard).

I got in a discussion with a biblical-literalist Christian about this one time.  How, I asked, can you justify the death of little babies because god decided that everyone but Noah's family was too wicked to live?  How can babies be "wicked?"

And she said -- no lie -- "God knew that the babies would grow up to be evil just like their parents, so he killed them to wipe out the evil in the land, root and branch."

Which is one of the most flat-out amoral statements I've ever heard.  Genocide?  Including women, children, and infants?  No problem, as long as god says they deserved it.  My general impression is that a god who operates on that kind of basis would hardly be worthy of worship.

The contents of this story should not really surprise anyone who lives in the United States.  There is still a strong thread of fundamentalism here, especially in the southern states, and young-earth creationism is alive and well (and the fight against teaching it as science in public schools is ongoing).  But why in the hell is it considered news that a guy believes in Noah's Ark?  We don't have news stories with titles like, "Hoboken Woman Still Getting Messages From Magic Unicorn."  (Although I have to admit, I'd read that article.)

The worst part is the last line in the article, which says, and I quote: "For the record, we have not independently verified if the rocks are in fact historic."  Meaning what?  You're gonna send a reporter down to look at the fossils and say, "Okay, they look like they're from the Great Flood to me?"  You haven't radioisotope dated them yourself?  You are unaware that fossils are, in fact, old?

Or that you're considering, heaven forfend, asking an actual fucking paleontologist to weigh in on this?

I know that a lot of media has devolved into clickbait and/or pandering to the whims of whoever wails the loudest, but is it too much to ask that we expect that news sources at least attempt to present real news stories in as unbiased a manner as they can manage?  The media gets away with this bullshit because we as consumers tolerate it.

It's time to demand more from our newspapers, radio and television news, and online media.  When you see or hear a story like "Tyler Man Says He Found Fossils From Noah's Flood," write or call in to let them know that it's unacceptable.  There always will be trash news sources -- I doubt The Daily Mail is going anywhere soon -- but the only way things will change is if we start letting the powers-that-be know that we expect more.
Posted by Gordon Bonnet at 2:01 AM