Too high a price

If you wanted a further demonstration of why religious leaders and religious organizations should be subject to the same laws as the rest of us, consider the ruling last week in Louisiana in which a judge struck down a rule requiring priests to report suspected child abuse.

The rule, part of Louisiana's Children's Code, faced the challenge because of the case of Father Jeff Bayhi.  Bayhi had been sued by Rebecca Mayeaux, who had confided to Father Bayhi during confession that she was being molested by a sixty-year-old parishioner.  According to Mayeaux, not only did Bayhi not tell authorities, he gave Rebecca some stomach-turning advice:


Two years ago, Mayeux told us she went to Father Bayhi seeking advice when she was 14, because she trusted him more than her parents. Court records show when Mayeux went to Bayhi, Rebecca says he told her, “This is your problem, sweep it under the floor and get rid of it.”

When Mayeaux sued, Bayhi claimed that his religious freedoms were being infringed upon, based on the Roman Catholic doctrine of the inviolability of the "seal of confession."  And last week, State District Judge Mike Caldwell ruled that Bayhi was right.

I have a personal reason for finding this appalling.  When I was a teenager, I knew Father Gilbert Gauthé, who was one of the first priests tried and convicted for pedophilia.  He was the assistant pastor at Sacred Heart Catholic Church of Broussard, Louisiana, where my grandmother worked as the priest's housekeeper and cook.  Gauthé never approached me inappropriately -- fortunately for him, because my grandmother would have strangled him with her bare hands if he had -- but while he was there, he became a Youth Group and Boy Scout leader.  During his tenure in Broussard and in three other parishes, he molested dozens of young boys -- some say as many as a hundred. 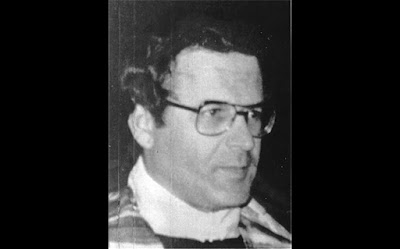 Part of the problem was that Gauthé was a charmer.  I remember that well.  He was funny, personable, and friendly; everyone liked him.  Even after he was caught, it was hard to believe that someone like him could do such horrific things.  His defense lawyer, Ray Mouton, found it difficult to stay impartial. "No one would have believed this nondescript, mild-mannered, soft-spoken person could have done the things he was charged with," Mouton said. "And then he began to speak about these things and being in that room with him was the creepiest experience of my life."

And the whole time Gauthé was hurting children, Bishop Gerard Frey knew what was happening, but because of the shame it would bring on the church, refused to turn Gauthé in.  Instead, he was transferred from parish to parish, bringing him into contact with fresh groups of children to violate.  Even when he was caught, the church leaders tried to do damage control for their own reputations rather than helping the victims.  "The church fought me at every turn," Mouton said.  "They wanted me to plead him out and make it go away."

Mouton himself was so disgusted by the whole thing that it drove him not only out of his law career, but out of the church as well.   "I honestly believed the church was a repository of goodness," he said.  "As it turns out, it wasn't...  When I decided to take that case, I destroyed my life, my family, my faith.  In three years, I lost everything I held dear."

And Caldwell's ruling last week, hailed as a "victory for religious liberty," is making it easier for predators to remain free, and for church leaders who are complicit in their abuses to retain their veneer of holiness.  Father Paul Counce, canon lawyer for the Diocese of Baton Rouge, explained that priests can be excommunicated for violating the seal of confession.

A fate, apparently, that carries a higher price than all of the lives ruined by pedophiles who will never come to justice.
Posted by Gordon Bonnet at 2:04 AM