When I read woo-woo conspiracy nonsense, one of the first things I often do is to shout at the computer, "Learn some damn science, will you?"

Not that it accomplishes anything.  The writers can't hear me, and my computer has a stress gauge on it that measures my irritation levels and uses that data to decide when would be the optimal time to malfunction so as to get the maximum possible freak-out.  So cluing it in that I'm already frustrated is probably a bad idea, a little like acting scared in front of a potentially vicious dog.

This all comes up because of a post over at the dubiously sane website Nutbarfactor.com, called "Why are WEAPONIZED Cell Towers Popping Up All Over the Country?"  This article raised a number of questions, the first of which is to ask whether the website is "Nut Bar Factor" or "Nut Barf Actor."  Because clearly those aren't the same thing.

Be that as it may, we hear right from the get-go about why you should worry if you live near a cell tower:

SHORT ANSWER?  THEY ARE NOT CELL TOWERS!

Apparently, one of the bad effects is that they cause your computer's caps lock to get stuck on. 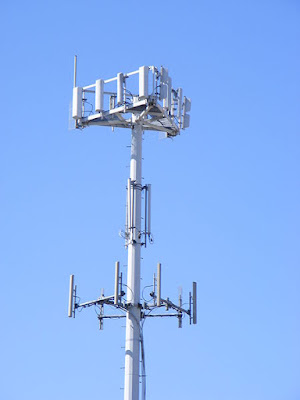 But it's worse than that, as he goes on to tell us:


(A) communications satellite uses 2,400 watts of power (about the same as used by 2 hair dryers).  A microwave oven uses 1,000 watts (1 kilowatt) of energy.  The satellite gets the energy from solar panels and the microwave gets it from your electric utility (the electrical power grid)...  (T)he cables leading into a typical cell phone tower, which he describes as “A giant microwave oven on a stick,” capable of releasing 3,000,000 watts (3 megawatts) of output power to the tower’s magnetron – or even more megawatts, if there is an amplifier at the top.

So why would they have such a power capacity?  Surely it can't have anything to do with power transmission intensity dropping off as a function of the inverse square of the distance, or the necessity of broadcasting over a long range, right?


These megawatts of extra power are NOT for data transfer – nothing close to that amount of energy is required for data transfer – which is an important point, because this suggests to him that cell phone towers are easily capable of being switched to Weaponized Mode.

That cell phone towers are wired with the capability to release millions of watts of microwave radiation makes them veritable of “towers of death”, the perfect weapons against an “invasion” – or the mega-slaughter of the domestic population... (I)f whoever we elect turns out to be so crazy, batshit evil, that they could fake a reason to turn on the ‘Last Line of Defense,’ the ‘Anti-Foreign Invasion’, ‘Anti-Zombie Apocalypse Network’ to cook the entire population within the city limits within an hour, in the middle of the night, with robot armies to mop up the people living in the countryside.

Sure they will.  Because what does government exist for, if not to cook us all like reheating yesterday's leftover pork roast?

Anyway.  Let's look at what people who actually understand physics have to say about the danger.  From an article by Elliott Drucker in Wireless Week, we have the following:


As a worst-case scenario in terms of exposure to RF radiation, consider a cell tower located only 30 meters (about 100 feet) away, and transmitting a total of 500W effective radiated power (ERP).  Of course, if you are only 30 meters from the transmitting antennas, you also are likely well below their horizontal beam centers even if severe downtilt is used. But for the sake of our worst-case analysis, let's assume that the full 500W is aimed right at you.  In that case, the RF power density where you are standing would be 4.4 microwatts per square centimeter.  For comparison, the FCC's mandated power density limits for continuous uncontrolled RF exposure by the general public are 600 and 1,000 microwatts per square centimeter for 900 and 1900 MHz signals, respectively.  Even in our highly unlikely worst-case scenario, RF exposure levels would be well under 1 percent of the maximum deemed safe by the FCC.

Put another way, by a physicist friend of mine, "A common number given for the power output of a cellphone tower is 100 watts.  So in terms of its power output, the tower would be as dangerous as a 100 watt light bulb."

What about his claim that there is a 3 megawatt power consumption rate by cell towers?  Besides the fact that he apparently pulls this number out of thin air, there's the problem that the input power of the cell tower isn't only used for broadcasting the cell signal, it's used for other things -- like lighting.  Most of the lights on cell towers are high-wattage incandescents.  According to my physicist pal, "I'd have to do the math to be certain of this, but my guess is that a significant fraction of the input energy of a cell tower is actually going into peripherals like lighting.  The output signal runs at a surprisingly low wattage."

So unfortunately for the conspiracy-minded, the likelihood that the government is planning on microwaving us all to death is completely unfounded.  It's a pity, especially given that one of the uses that the guy at Nut Barf Actor came up with was as an "Anti-Zombie Apocalypse Network."  Which I have to admit to being a good idea.  You have to wonder how well zombies would deal with being microwaved until they were piping hot on the inside.
Posted by Gordon Bonnet at 3:19 AM