We've got your number

As a science teacher, one of the things I find fascinating and perplexing is the phenomenon of innumeracy. 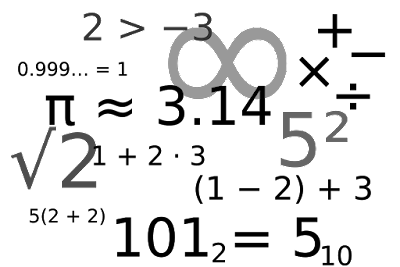 As an example, take a student of mine who took physics with me, perhaps 25 years ago.  We were studying electrical force, and there was a problem set up that allowed you, with a few given parameters, to calculate the mass of an electron.  So after working for a time, this kid raised her hand, and asked, "Is this the right answer?"

Now, I'll point out from the get-go that she'd made a simple computational error -- divided when she should have multiplied.  What struck me is that she had no idea her answer was wrong.  When I said, "Doesn't your answer seem a little large, for an electron?" she replied, "Is it?  It's what my calculator said."

What's curious about innumerate people is that they're frequently quite good at rote cookbook math -- they can follow lists of directions like champs.  But they have no real sense of numbers, so they have no way to tell if they've gotten the wrong answer.

What's also interesting is that there are people who are pretty competent with small numbers, but lose it entirely with large numbers.  An exercise I used to do with my physics students to help correct this -- which, allow me to say up front, wasn't particularly successful -- was to have them do order-of-magnitude estimation problems.  Within an order of magnitude, how many ping-pong balls would it take to fill the classroom?  How many 1'x1' floor tiles are in the entire school?  How many telephone books in a stack would it take to reach from the Earth to the Moon?  And so on.  Once again, these kids could do the problems, once you'd established a protocol for how to solve them; but I don't think they really got any better at understanding magnitudes through doing it than they had to start with.

Now, scientists at Imperial College in London have gained an insight into why this big-versus-small number comprehension issue might exist; they have found that big and small numbers are processed in different parts of the brain.

The study, led by Qadeer Arshad of the Department of Medicine, said that the idea for the study came from studying victims of strokes whose damage interfered with very specific abilities apropos of number processing. "Following early insights from stroke patients we wanted to find out exactly how the brain processes numbers," Arshad said.  "In our new study, in which we used healthy volunteers, we found the left side processes large numbers, and the right processes small numbers.  So for instance if you were looking at a clock, the numbers one to six would be processed on the right side of the brain, and six to twelve would be processed on the left."

Which at least gives a preliminary explanation of why there are students who do just fine with manipulating small numbers, but fall apart completely when dealing with large ones.  I deal with kids for whom 10,000 years ago, 1,000,000 years ago, and 1,000,000,000 years ago all sound about the same -- "big" -- making it difficult to give them any real sense of the time scale of evolutionary biology.

Anyhow, I think the study by Arshad et al. is fascinating, and gives us a further window into understanding how our brains work.  Which is all to the good.  Although it still doesn't quite answer how someone could think that a 36 kilogram electron sounds reasonable.
Posted by Gordon Bonnet at 2:08 AM