One of the most wonderful moments in Douglas Adams's The Hitchhiker's Guide to the Galaxy occurs when Ford Prefect and Arthur Dent fire up the Infinite Improbability Drive, which allows a spaceship to pass through all points in space simultaneously.  Unfortunately, it has as a side effect altering the likelihood of every event in the vicinity of the ship.  As their ship is being zipped along, Arthur comes in with an alarmed look on his face.

"'Ford!' he said, 'there's an infinite number of monkeys outside who want to talk to us about this script for Hamlet they've worked out.'"

It's a standard way to explain the likelihood of extremely unlikely occurrences over long periods of time -- that something that exists at a very low probability (like monkeys randomly pounding keys on a typewriter and writing out the script to Hamlet) will eventually happen if you wait long enough.  It's like the random motion ("Brownian motion") of molecules, due to their thermal energy.  It's possible that all of them will, by chance, move in the same direction at the same time, and your cup of coffee will jump up off the table.  But as my long-ago thermodynamics professor said, "It is, however, extremely unlikely."

This all comes up because something that was incredibly unlikely just happened a couple of days ago.  Fasten your seatbelts and hold down your coffee cups:

Ken Ham said something that was scientifically correct.

Okay, he said it for the wrong reason, but he still was right, which kind of blew me away.  He was being asked about racism, and not only did he give the right general response ("racism bad") he said, "The answer to racism is believing the true history of humans in Genesis (as confirmed by science): we're all one race — not different races.  When politicians and media talk about 'races' of humans, they are actually fueling racism there's only one race, the human race...  There are no truly black or white people — all are basically brown (pigment melanin) — but differing shades because of genetic variability."

Which, if you leave out the "true history in Genesis as confirmed by science" part, is actually pretty much correct.  The things we lump together as "race" -- physical features such as skin color, eye color, hair color and texture, and so on -- are actually not very good indicators of degree of relatedness between different human ethnic groups.  Geneticist Richard Lewontin writes:

Since such racial classification is now seen to be of virtually no genetic or taxonomic significance... no justification can be offered for its continuance.

Now, to be sure, race and ethnicity have a great deal of cultural significance.  But its biological significance is nil.  As my college genetics professor, Dr. Lemmon, put it, "There is more human genetic variability in one hundred-square-mile area of Tanzania than there is between a typical Englishman and a typical Japanese man."

Which makes sense, of course, given that East Africa is where the human race evolved.  It's unsurprising that we still see tremendous diversity there.  Add that to the suggestion (well supported by evidence) that Homo sapiens went through a major genetic bottleneck about 74,000 years ago -- some researchers believe that the survivors may have numbered less than 2,000 individuals -- and a lot of the diversity (and lack thereof) has a fairly natural explanation. 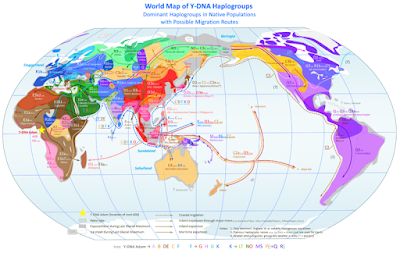 It also makes claims about racial superiority/inferiority seem kind of idiotic, doesn't it?

So Ham is right, although for entirely wrong reasons.  He's correct that traits such as skin color are very variable; but the idea that the genetic variability just kinda happened is ridiculous.  There's a big difference in selective pressure on the genes that control melanin production if you live in (for example) Kenya as compared to living in northern Finland.  In Kenya, the main driver is protecting the skin from harsh sunlight, and thus higher melanin production; in Finland, it's UV-mediated vitamin D synthesis, and thus lower melanin production.

In other words, natural selection and evolution.

Anyhow, I found it remarkably like Adams's infinite monkeys when I read Ham's statement, given that most of the rest of what he believes has no scientific basis whatsoever, even on the level of general gist.  But, to look at it a different way: as my dad used to say, even a stopped clock is right twice a day.
Posted by Gordon Bonnet at 3:21 AM