Can I just say that I am sick unto death of people misrepresenting science?

Some scientist somewhere makes a discovery, and it seems to take only milliseconds before every woo-woo with a favorite loony idea about how the world works is using it to support their claims.  These people have taken confirmation bias and raised it to an art form.

I saw a particularly good (or bad, as the case may be) example of this yesterday in an article by Michael Forrester called "People Can Draw Energy From Other People The Same Way Plants Do," that is getting passed all over social media.  So let me illustrate my point by telling you what some of Forrester's conclusions from this scientific research are, and afterwards I'll tell you about the actual research itself.

See if you can connect the two.

Forrester says that we absorb "energies" from our surroundings.  He never defines what he means by "energy," but I'm pretty sure it's not the standard physics definition, because he includes stuff about being around "negative people."  He cites "psychologist and energy healer" Olivia Bader-Lee, who says:


This is exactly why there are certain people who feel uncomfortable in specific group settings where there is a mix of energy and emotions...  The human organism is very much like a plant, it draws needed energy to feed emotional states and this can essentially energize cells or cause increases in cortisol and catabolize cells depending on the emotional trigger...  Humans can absorb and heal through other humans, animals, and any part of nature.  That's why being around nature is often uplifting and energizing for so many people.

We're then given specific recommendations for how to "absorb and heal" efficiently.  These include:
I was especially interested in the "energy cleanse" thing, and fortunately, Forrester tells us exactly how to accomplish this:


The color gold has a high vibration which is useful for clearing away foreign energy.  Imagine a gold shower nozzle at the top of your aura (a few feet above your head) and turn it on, allowing clear gold energy to flow through your aura and body space and release down your grounding.  You will immediately feel cleansed and refreshed.

So all I have to do is imagine it, eh?  Given that I work with teenagers, I wish the "owning your personal aura space" was something that would happen if I imagined it.  Teaching a room full of tenth graders is like trying to herd puppies.  Since yelling "BACK OFF" is seldom effective, it'd be nice if all I had to do was to picture my "aura space" (gold-colored, of course) and the teenagers would be repelled backwards in a comical fashion, sort of like Yoda did to Count Dooku at the end of Star Wars: Attack of the Clones. 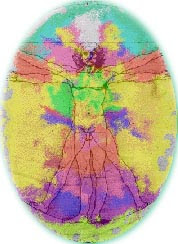 Okay.  So you're probably wondering what scientific research led Forrester and Bader-Lee to come to this conclusion.

The discovery by a team of scientists in the Biotechnology Department of Bielefeld University (Germany) that a species of algae can digest cellulose.

If you're going, "Um, but wait... but... how... what?" you should realize that I had exactly the same response.  I spent several minutes thinking that I had clicked on the wrong link.  But no.  In fact, Forrester even mentions the gist of the research himself:


Members of Professor Dr. Olaf Kruse’s biological research team have confirmed for the first time that a plant, the green alga Chlamydomonas reinhardtii, not only engages in photosynthesis, but also has an alternative source of energy: it can draw it from other plants.

And from this he deduces that all you have to do to be happy is to picture yourself underneath a gold shower nozzle.

I've seen some misrepresentations and far-fetched deductions before, but this one has to take the prize.

I get that people are always casting about looking for support for their favorite theories.  So as wacky as Forrester's pronouncements are, at least I see why he made them.  But what baffles me is how other people can look at what he wrote, and say, "Yes!  That makes complete sense!  Algae that can digest cellulose!  Therefore aura spaces and energetic vibrations of happiness!

Okay, I admit that I can be a hardass rationalist at times.  But seriously, what are these people thinking?

Not much, is my guess.

So anyhow, watch out for those negative energies.  Those can be a bummer.  But if you're feeling like your vibrations are low, don't despair.  I hear that getting into psychic communication with algae can help.
Posted by Gordon Bonnet at 2:36 AM