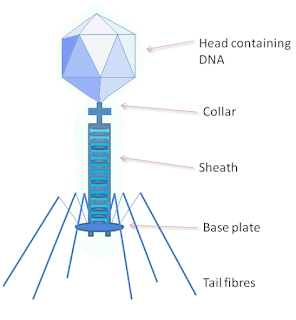 Diagram of a bacteriophage [image courtesy of the Wikimedia Commons]

Pretty amazing stuff.  My response was, "If that isn't evolution, what the hell is it?"  Of course, I'm expecting the litany of goofy rejoinders to start any time now.  "It's only microevolution."  "There was no novel gene produced."  "But both of them are still viruses.  If you showed me a virus evolving into a wombat, then I'd believe you."

Nevertheless, this sticks another nail in the coffin of the anti-evolutionists -- both Intelligent Design proponents and the young-Earth creationists, the latter of whom believe that all of the Earth's species were created as-is 6,000 or so years ago along with the Earth itself, and that the 200 million year old trilobite fossils one sometimes finds simply dropped out of god's pocket while he was walking through the Garden of Eden or something.

So as usual, you can't logic your way out of a stance you didn't logic your way into.  Still, I have hope that the tide is gradually turning.  Certainly one cheering incident comes our way from Richard Lenski, who is justly famous for his groundbreaking study of evolution in bacteria and who co-authored the Meyer paper I began with.  But Lenski will forever be one of my heroes for the way he handled Andrew Schlafly, who runs Conservapedia, a Wikipedia clone that attempts to remodel the world so that all of the ultra-conservative talking points are true.  Schlafly had written a dismissive piece about Lenski's work on Conservapedia, to which Lenski responded.  The ensuing exchange resulted in one of the most epic smackdowns by a scientist I've ever seen.  Lenski takes apart Schlafly's objections piece by piece, citing data, kicking ass, and taking names.  I excerpt the end of it below, but you can (and should) read the whole thing at the article on the "Lenski Affair" over at RationalWiki:


I know that I’ve been a bit less polite in this response than in my previous one, but I’m still behaving far more politely than you deserve given your rude, willfully ignorant, and slanderous behavior.  And I’ve spent far more time responding than you deserve.  However, as I said at the outset, I take education seriously, and I know some of your acolytes still have the ability and desire to think, as do many others who will read this exchange.


I noticed that you say that one of your favorite articles on your website is the one on “Deceit.”  That article begins as follows: “Deceit is the deliberate distortion or denial of the truth with an intent to trick or fool another. Christianity and Judaism teach that deceit is wrong.  For example, the Old Testament says, ‘Thou shalt not bear false witness against thy neighbor.’”  You really should think more carefully about what that commandment means before you go around bearing false witness against others.

So there you have it.  Science finding out cool stuff once again, because after all, that's what science does.  The creationists, it is to be hoped, retreating further and further into the corner into which they've painted themselves.  It's probably a forlorn wish that this'll make Ken Ham shut up, but maybe he'll eventually have to adapt his strategy to address reality instead of avoiding it.

You might even say... he'll need to evolve.
Posted by Gordon Bonnet at 2:00 AM