Are you bothered by your psychic abilities?  Do you find yourself unable to tune out others' thoughts?   Is the color of your aura clashing with your favorite shirt?

Maybe you need to do some psychic grounding.


Honestly, I can imagine that it might be inconvenient to be psychic, if such things actually existed. Especially if you were telepathic.  Consider what it would be like if you really could read the minds of the people around you.  I don't know about you, but my mind is a continuous jumble of random thoughts, most of them inane, weird, and/or irrelevant.  There is frequently musical accompaniment, usually consisting of whatever song I heard on the radio on the way to work.  And like most people, I also often have thoughts that I hope fervently never leave my skull, because of the sheer embarrassment potential.  If my thoughts really could be recorded, sequentially, they'd probably sound something like the following:

And so on.  I would think that being telepathic would be at best highly distracting, and at worst the mental equivalent of being trapped 24/7 in a noisy bar.  (A feature I worked into one of my characters -- the telepathic detective Callista Lee, in Poison the Well, due for release next month.)  I know that there are people I have to interact with on a daily basis that I already want to scream "dear god, will you please just shut up!" at, and that's just from hearing what they say out loud.  If I could hear their thoughts, too... well, let me just say that this could well be at the heart of some seemingly unpremeditated homicides.

Be that as it may, if this is you... help is on the way, in the form of the aforementioned article, which was written by someone who signs his name only as "Nathaniel." 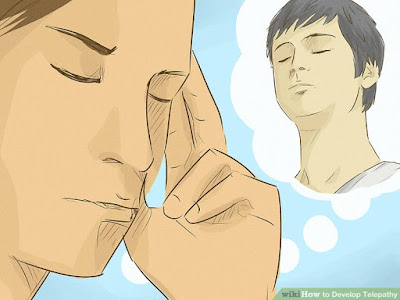 The gist of shutting down your psychic abilities lies, apparently, in "grounding" yourself.  Nathaniel says that you can do this in the following ways:
So anyway, all of this seems to me like a lot of hooey -- if it really was this easy to gain and lose psychic abilities, all of us would be doing it all the time, constantly picking up each other's thoughts, and I would really have to watch myself when I see Really Hot Girl or Dorky Hat Guy.  Just as with last week's post on weird coincidences, most of what Nathaniel is describing is just wishful thinking, combined with dart-thrower's bias -- the tendency all of us have to notice seemingly odd stuff (such as when the clock reads 11:11) and ignore irrelevant background noise (such as when it says 5:48).  Our attention to such things doesn't make us psychic -- all it reflects is that evolutionarily, it's better to give attention to something that turns out to be unimportant than to ignore something that turns out to be critical to our survival.

So, honestly, I found Nathaniel's advice to be a bit of a disappointment.  I'd hoped for more concrete advice -- something along the lines of, "To avoid picking up the thoughts of those around you, fashion yourself a tinfoil hat.  Make sure that you use at least three layers for best effect, especially if you are using the cheap generic shit and not genuine Reynolds Wrap."  But maybe it's better that way. If I had to go around all day with a tinfoil hat, I'd be the one people were thinking "dorky" about -- even if, at the time, my "psychic shield" was keeping me from hearing about it.
Posted by Gordon Bonnet at 2:12 AM