A fight over teeth

It may seem like a trivial thing to gripe about, but I am absolutely sick unto death of people taking some completely ordinary scientific discovery, and shrieking, "This will completely rewrite every textbook on the subject!", or worse, "This invalidates everything we thought we knew about X!"

I know a bit about the history of scientific inquiry.  I'm no expert, but I'm definitely Better Than The Average Bear.  And when it comes to real, honest-to-Galileo scientific revolutions, I can only think of a few:

And that's about it.  Oh, there were other big developments.  The invention of the computer, for example, has changed our experience about as much as anything I can think of.  But it really wasn't an overturning of our understanding of how the world works; it was more a new and clever application of known physical laws to the problem of computation and information storage.

So what stands out about real scientific revolutions is how uncommon they are.  And given the precision of our tools, and the level of our inquiry in the past century, the chances of our having missed something fundamental is pretty slim.

Which is why I rolled my eyes and said a very bad word when I saw an article over at Inverse entitled, "9.7 Million-Year-Old Teeth Found In Germany Could Recast Human History."  The discovery, which is actually fairly cool, is that a team led by Herbert Lutz, director of the Natural History Museum of Mainz, Germany discovered some hominin teeth in a dig near the Rhine River.  It is an unusual find; most of the hominin fossils of that age have been confined to Africa.  But it certainly doesn't "rewrite human history."  The fact that there might have been a branch of hominins that made it to Europe ten-odd million years ago is interesting, but doesn't really overturn anything.  It just adds a branch to our family tree (and one that almost certainly isn't our director ancestor, anyhow). 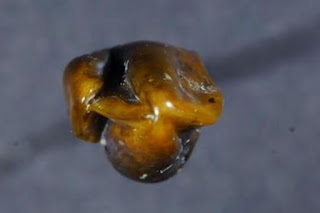 Lutz himself didn't help matters any by his statement to the press.  "It’s something completely new, something previously unknown to science," Lutz said.  "It’s a complete mystery where this individual came from, and why nobody’s ever found a tooth like this somewhere before."

I can put this reaction down to a scientist being understandably excited about his own work.  But when the media hears the words "unknown to science" and "mystery," they picture scientists sitting around with befuddled looks on their faces, then standing up and throwing away all of the textbooks and journals on the subject in question.

Which is a far sight from the truth, as Michael Greshko of National Geographic states.  "Do these teeth, as many news outlets have proclaimed, 'rewrite human history?'" Greshko writes.  "In a word, no."

In fact, there's still a lot of argument amongst paleontologists over whether the teeth are actually from a hominin, as Lutz believes.  Bence Viola of the University of Toronto, a world-renowned expert on the structure of hominin and hominoid teeth, is doubtful.  "I think this is much ado about nothing," Viola said.  "The second tooth (the molar), which they say clearly comes from the same individual, is absolutely not a hominin, [and] I would say also not a hominoid."

Viola suspects that the teeth are from some kind of pliopithecoid, a branch of primates only distantly related to humans, and which are known to have lived in Europe and Asia between seven and seventeen million years ago.

Viola's colleague, paleoanthropologist David Begun, is even more dismissive.  "The 'canine' looks to me like a piece of a ruminant tooth," Begun said.  "It has a funny break that makes it look a bit like a canine, but it is definitely not a canine, nor is it [from] a primate."

So not only do the teeth not "rewrite human history," there isn't even agreement about what animal the teeth were from.  So if you were thinking we were going to add an eighth scientific revolution to the seven I mentioned above based on Lutz's discovery, I fear you are destined for disappointment.

And the problem only gets worse when you're talking about a field in which people have a vested interest to disbelieve.  I can't tell you the number of times I've seen headlines like, "Paleontologist Finds Bone in a Dig Site -- Evolutionists Baffled!" or "Blizzard On the Way -- Climate Change Supporters Fumble for Explanation."  Trust me on this: no one's baffled or fumbling, and they're not rewriting the textbooks.  What the scientists are doing is adding another bit to our understanding of the universe.

Because that's how science works.
Posted by Gordon Bonnet at 2:14 AM