We've had psychic vampire repellent.  We've had people selling "raw water."  We've even had jade eggs that women are, for some reason, supposed to insert into their vaginas.

So the whole alt-med community has really been working overtime lately.  Which is why I shouldn't have been surprised when a loyal reader sent me a link to something called "Amino Neuro Frequency Patches." 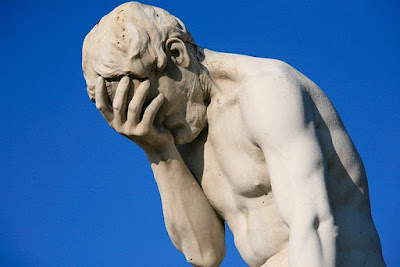 I know how you feel, dude.  [image courtesy of photographer Alex E. Proimos and the Wikimedia Commons]

What are "Amino Neuro Frequency Patches," you might ask?  I know I did.  Here's what the website says:


ANF is a revolutionary holistic approach to pain and inflammation.  Practitioners examine the body following the nerve paths and focus on finding the root cause of the patient’s problem.  They apply ANF discs to the skin to reduce pain, remove inflammation and prevent it from spreading via the nervous and lymphatic systems.  They use the discs in conjunction with manual therapy.

I'm guessing the "manual therapy" they're referring to is writing out a check to pay for the discs, and the course you're supposed to take before you're allowed to use them.  (No, I'm not kidding; you actually have to sign up for an online course before they'll send you your patches.)

So how could this possibly work?  The website explains that, too:


It uses a combination of frequency emitting wearable devices, the ANF Discs.  Each disc is applied directly on the skin and activated by the body heat.  They transmit a unique range of frequencies through the neurons in the body.  The nervous system picks up these frequencies, starting a self-healing and self-regulating process.  By improving the nervous system signaling directly at the cellular level, the effect of the treatment is much faster and has remarkable durable results.  The ANF Therapy does not require the use of any drugs or chemicals...  The connection from the patch to the body is made through the nervous system and the seven layers of bio energy the body naturally produces, the patch providing the signal to promote cellular communication to reduce stress and anxiety while restoring imbalances, as an example.

Okay, first, let's get something clear.

Frequency isn't some kind of hand-waving, Cosmic Connection To The Quantum Energy Field concept.  (Now that I think of it, neither are "quantum," "energy," and "field.")  Frequency means the number of times something oscillates in a given amount of time.  It's measured in units called hertz, which is an oscillation per second.

Your intestines do not have a frequency, unless something is making them vibrate, which sounds painful.

Of course, that hasn't stopped people from claiming that they do.  Here's a concise list of some alleged frequencies of different things:

And I have to admit that I burst out laughing when I saw that a can of asparagus doesn't vibrate at all.  How this is supposed to translate into "bad for you," I don't know, although I will agree to the extent that canned asparagus is one of the most disgusting things the human race has ever created.

So once again, we have some completely unscientific horseshit being passed off as serious medical advice.  My recommendation: don't trust anyone whose knowledge of actual scientific terms convinces you that they failed high school physics.  Good rule of thumb, that.
Posted by Gordon Bonnet at 3:11 AM