A couple of days ago, a friend and loyal reader of Skeptophilia sent me a link with the message, "I thought I'd seen it all."

Well, I can say from painful experience, never give the universe an opening like that.  Every single time I think I've found the weirdest, goofiest claim ever, people take it upon themselves to come up with something even loonier.

This is why today we're looking at how Lady Gaga's announcement that she has fibromyalgia was her way of admitting that she'd sold her soul to the Illuminati. 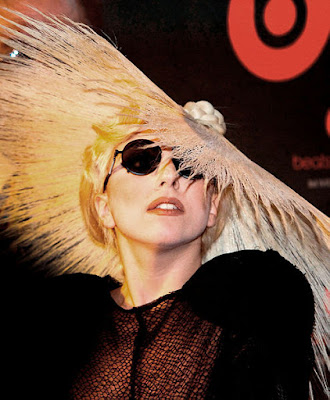 That, at least, is the contention of a group of people who evidently have been doing sit-ups under parked cars, as reported by Mariel Loveland, writing for Ranker.  These folks claim that the documentary describing the singer's chronic illness, Five Foot Two, was filled with hints about the real cause of the disease.  Loveland writes:


According to Anonymous, at one of these very same Lower East Side Clubs she sold her soul to the Illuminati for fame and fortune.  But Gaga, always one to push the envelope, reportedly went about "donating" rather than selling her soul to the organization.

Which is pretty darn generous.  I know I'd want something in return for my soul, and more than just membership in the Illuminati.  I mean, don't they have some kind of signup bonus?  Like back in the day, when you'd sign up for a checking account, the bank would give you a toaster or something.

So according to Loveland's informant, the Illuminati were waiting for her after a concert, to make her an offer she couldn't refuse.  Here's her alleged account of what happened:


…This man, a strangely ageless man in a suit, spoke to me.  He was leaning against the wall smoking, and he said to me, "I think you've got what it takes. Do you want it?"...  I asked what 'it' was I thought he was coming onto me, but he smiled and said, "Everything.  Success.  Fame.  Riches.  Power.  Do you want it all?"

Kind of tempting, that would be.  So she went for it, and sure enough, she became famous and rich and so on and so forth.  But like Faust and so many others have discovered, you can't just sell your soul to the devil and expect to get off with a slap on the wrist:


[T]his chronic pain is caused by conflicting forces battling for supremacy inside herself...  The singer allegedly wants to "rid her body of the dark spirituality" that she welcomed via "Satanic rituals early on in her career."  These dark forces allegedly cause her chronic pain...  They may give you special powers, outer beauty, talent, and wealth for a while, but it doesn’t last.

And of course, no claim of the Illuminati would be complete without a contribution from Alex Jones.  About a concert where she appeared to float upwards, followed by some flashing lights, Jones said:


They say she’s going to stand on top of the stadium, ruling over everyone with drones everywhere, surveilling everyone in a big swarm.  To just condition them to say "I am the Goddess of Satan" ruling over them with the rise of the robots in a ritual of lesser magic.

Which, I think we can all agree, is the only possible explanation for a pop singer doing something flamboyant.

Then we get to hear all about how Gaga's actual name, Stefani Joanne Angelina Germanotta, contains an anagram of the name Lina Morgana, a different pop singer who Gaga supposedly murdered, and how Gaga keeps flashing the All-Seeing Eye symbol during her concerts, either as a sign of her soulless condition or as a desperate plea for help from her fans.  The upshot is that we should all either boycott her concerts, or else rescue her from the Forces of Evil, whichever version you decided to go for.

At that point, my eyes were crossing, so I didn't get any further in the article.

I think what bothers me about all of this is not that loony people have come up with conspiracy theories.  That, after all, is what loonies do.  But here we have this poor woman, who through no fault of her own has contracted a debilitating disease, and she makes a documentary going public with her struggles, and she's repaid by raving wackazoids like Alex Jones claiming that she got her just deserts for taking up with the Bad Guys.

The object lesson here is that fame comes at a price, and I don't mean "your soul."  It means your privacy, and in a lot of ways, your chance at being treated compassionately and empathetically.  All the more reason why I'd never want to be famous, not that it's all that likely in any case.
Posted by Gordon Bonnet at 2:08 AM