One of the most terrifying sleep-related phenomena is sleep paralysis.

I say this only from hearing about the experiences of others; I have never had it happen to me.  But the people I've talked to who have had episodes of sleep paralysis relate being wide awake and conscious, but unable to move -- often along with some odd sensory experiences -- such as feelings of being watched or having someone in the room; hissing, humming, or sizzling noises; a tingling in the extremities that feels like a mild electric shock; a feeling of being suffocated; and (understandably) the emotions of fear and panic.

The reason all of this comes up is an article that appeared over at the site Mysterious Universe last week about "shadow people."  The piece was by Nick Redfern, whose name should be familiar to anyone who is an aficionado of cryptozoology; Redfern has been involved in a number of investigations of the paranormal, and is the author of books such as The Roswell UFO Conspiracy, Shapeshifters: Morphing Monsters and Changing Cryptids, The Real Men in Black, The New World Order Book, and a variety of other titles I encourage you to peruse.

So Redfern has a pretty obvious bias, here, which is why I was already primed to view his piece on the Shadow People with a bit of a jaundiced eye.  Let me let him speak for himself, though.  Redfern tells us that there are these entities that we should all be on the lookout for, and then tells us the following:

Shadow Cats?  Why only cats?  Cats, in my experience, are already conceited enough that they don't need another feather in their caps.  Of course, the positive side is that Shadow Cats wouldn't be very threatening.  My cats specialized in two behaviors: Sitting Around Looking Bored, and Moving Closer To Where We Are So We'll Appreciate How Bored They Are.  If their Shadow versions are no more motivated, it's hard to see why you'd even care they were around, since Shadow Cats presumably don't eat, drink, or use a litter box.  They'd kind of be a low-impact paranormal home décor item.

On the other hand, I'm just as glad there are no Shadow Dogs, because then we'd have yet another source of the really obnoxious noise that dogs make when they are conducting intimate personal hygiene, a sound my wife calls "glopping."  Our two dogs glop enough, there's no need for additional glopping from the spirit world.

But then there's "Hat Man."  On first glance, that seemed fairly non-threatening, but Redfern tells us that Hat Man is the scariest one on the list:


I sat and listened at my table [at a conference, speaking to an attendee] as he told me how, back in July of this year, he had three experiences with the Hat Man – and which were pretty much all identical – and which were very familiar to me.  He woke up in the early hours of the morning to a horrific vision: the outside wall of his bedroom was displaying a terrifying image of a large city on fire, with significant portions of it in ruins. It was none other than Chicago.  The sky was dark and millions were dead.  Circling high above what was left of the city was a large, human-like entity with huge wings.  And stood [sic] next to the guy, as he watched this apocalyptic scenario unravel from his bed, was the Hat Man, his old-style fedora hat positioned firmly on his head.  The doomsday-like picture lasted for a minute or two, making it clear to the witness that a Third World War had begun.  On two more occasions in the same month, a near-identical situation played out.  It’s hardly surprising that the man was still concerned by all this when we chatted at the weekend.

So he talked to some other people, and more than one person mentioned seeing Hat Man, and always associated with images of doom and destruction.  Toward the end, he mentions the fact that one of the people who'd seen Hat Man suffered from sleep paralysis... which kind of made me go, "Aha."

In a paper by Walther and Schulz back in 2004 entitled, "Recurrent Isolated Sleep Paralysis: Polysomnographic and Clinical Findings," it was found that people who suffered from sleep paralysis showed abnormal patterns of REM and non-REM sleep, and (most interestingly) fragmentation of REM.  REM, you probably know, is associated with dreaming; suppressing or disturbing REM causes a whole host of problems, up to and including hallucination.  Another paper -- Cheyne, Rueffer, and Newby-Clark, in 1999, "Hypnagogic and Hypnopompic Hallucinations during Sleep Paralysis: Neurological and Cultural Construction of the Night-Mare" -- has another interesting clue, which is that during sleep paralysis, cholinergic neurons (the neural bundles that promote wakefulness and REM) are hyperactive, whereas the serotonergic neurons (ones that initiate relaxation and a sense of well-being) are inhibited.  This implies that the mind becomes wakeful, but emotionally uneasy, before the brain-body connection comes back online. 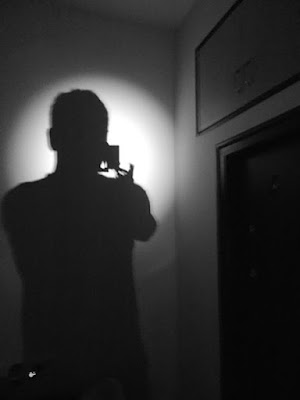 The problem here is that if you're in sleep paralysis, or the related phenomenon of hypnagogic experiences (dreams in light sleep), what you are perceiving is not reflective of reality.  So as creepy as Shadow People are -- not to mention "Hat Man" -- I'm pretty certain that what we've got here is a visual hallucination experienced during a dream state.

Not sure about the Shadow Cats, though.  I still don't see how that'd work.  Given my luck at trying to get my cats comply with rules such as "Stay The Hell Off The Kitchen Counter," my guess is that even feline hallucinations wouldn't want to cooperate.  If you expected them to show up and scare some poor dude who was just trying to get a good night's sleep, they'd probably balk because it wasn't their idea.  Shadow Dogs, on the other hand, would be happy to climb on the sleeping dude's bed and glop right next to his ear.  They're just helpful that way.
Posted by Gordon Bonnet at 2:45 AM