Cult (n.) -- a system of religious veneration and devotion directed toward a particular figure or object, often involving a misplaced or excessive admiration for a particular person or thing; a relatively small group of people having religious beliefs or practices regarded by others as strange or sinister.

I bring this up so that we can have a working definition right at the outset, because it's a term that has been misused (and in some places overused) to the point that it's lost a lot of its punch.  But two news stories in the past week have brought the word to mind -- apropos of the veneration with which the extreme wing of Trump voters treat the president and his cronies.

Let's start with the less egregious of the two -- an Alabama pastor, Earl Wise, who said in an interview with The Boston Globe that he would vote for accused sexual predator Roy Moore for Senate, even if the allegations against Moore were proven true beyond a shadow of a doubt.

In a tirade that combines "tone-deafness," "misogyny," and "excusing pedophilia" into a truly nauseating confection of venom, Wise said:


I don’t know how much these women are getting paid, but I can only believe they’re getting a healthy sum.  If these stories were true, the women would have come forward years ago...  There ought to be a statute of limitations on this stuff.  How these gals came up with this, I don’t know.  They must have had some sweet dreams somewhere down the line...  Plus, there are some fourteen-year-olds, who, the way they look, could pass for twenty.

So now what a child looks like determines the age of consent?

If you think that's bad, wait till you hear about the other one.  Mark Lee, a Trump voter who participated in a panel discussion on CNN, was talking about how wonderful the president is, how he's "draining the swamp" and "helping the little guy" even though mostly what the president seems to be doing is appointing unqualified cronies to public office, lining his own pockets, and tweeting messages that sound like they came from a petulant and rather stupid fourth grader.  But all of that pales by comparison to a statement Lee made later in the discussion: "If Jesus Christ gets down off the cross and told me Trump is with Russia, I would tell him, 'Hold on a second.  I need to check with the president if it's true.'"

Isn't the whole idea of traditional, conservative Christianity that Jesus Christ is the ultimate authority?  Because it sure as hell sounds to me like in Mark Lee's mind, Donald Trump has somehow usurped that position.

What I'm most curious about this is what could possibly be the motivation.  Are these people simply siding with the person they think will give them what they want -- pro-life legislation, anti-LGBTQ legislation, conservatives running the courts, religion in school (only the right religion, of course), the Ten Commandments in every government building?  Because that's pretty Machiavellian, but at least I can understand it.  To some extent, most of us make deals with the devil when we vote -- there is seldom anyone who is 100% aligned with our beliefs and interests.

My fear, however, is that this goes way, way beyond pragmatism.  This kind of thing, especially the statement by Mark Lee, smacks of the same kind of single-minded veneration the people of North Korea are supposed to have for Dear Leader.  No, of course the president couldn't be wrong.  About anything.  It's the kind of thinking that inspired this: 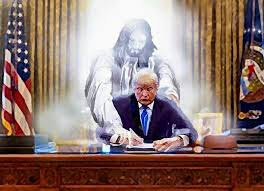 Cf. the definition of cult above.

There's a real danger when people start claiming to know the Mind of God.  As Susan B. Anthony put it, "I distrust those people who know so well what God wants them to do, because I notice it always coincides with their own desires."  It is far more dangerous, however, when people believe that some flesh-and-blood human is the embodiment of the divine -- and infinitely more so when that person has shown himself to be venial, corrupt, greedy, lecherous, and dishonest.


I'm not at all sure what to do about this.  Once you've ceded your will to anyone or anything else, there's not much anyone can do to help you.  I keep hoping that Robert Mueller will step in and put a stop to the miasma of corruption, cronyism, and nepotism our government has become, but I know that these people won't go down without a fight.

And what absolutely terrifies me is that the Earl Wises and Mark Lees of the world will be right there in the front, very likely well-armed, fighting for the man they've turned into a god.
Posted by Gordon Bonnet at 2:57 AM