A self-portrait drawn by others

As you might imagine, I get hate mail pretty frequently.

Most of it has to do with my targeting somebody's sacred cow, be it homeopathy, fundamentalist religion, astrology, climate change denial, or actual sacred cows.  And it seems to fall into three general categories:
I've gotten several of the latter in the last few weeks, and it's these that I want to address in this post, because they're the ones I find the most curious.  I've got a bit of a temper myself, so I can certainly understand the desire to strike back with an insult at someone who's angered you; and it's unsurprising that a person who is convinced of something will want to rebut anyone who says different.  But the idea that I'd tell someone I was arguing with what they believed, as if I knew it better than they did, is just plain weird.

Here are a handful of examples, from recent fan mail, to illustrate what I'm talking about:
So, let's see.  That makes me a white English-only wacko vegetarian enviro nut (with crap in my pants) who eats weed killer for breakfast while writing checks to Monsanto and plotting how to tear down churches so I can destroy the United States.

I know it's a common tendency to want to attribute some set of horrible characteristics to the people we disagree with.  It engages all that tribal mentality stuff that's pretty deeply ingrained in our brains -- us = good, them = bad.  The problem is, reality is a hell of a lot more complex that that, and it's only seldom that you can find someone who is so bad that they have no admixture whatsoever of good, no justification for what they're doing, no explanation at all for how they got to be the way they are.  We're all mixed-up cauldrons of conflicting emotions.  It's hard to understand ourselves half the time; harder still to parse the motives of others.

So let me disabuse my detractors of a few notions.

While I'm not religious myself, I really have a live-and-let-live attitude toward religious folks, as long as they're not trying to impose their religion on others or using it as an excuse to deny others their rights as humans.  I have religious friends and non-religious friends and friends who don't care much about the topic one way or the other, and mostly we get along pretty well.

I have to admit, though, that being a card-carrying atheist, I do have to indulge every so often in the dietary requirements as set forth in the official Atheist Code of Conduct. 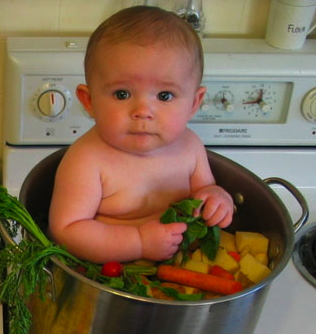 Speaking of diet, I'm pretty far from a vegetarian, even when I'm not dining on babies. In fact, I think that a medium-rare t-bone steak with a glass of good red wine is one of the most delicious things ever conceived by the human species.  But neither am I a chemical-lovin' pro-Monsanto corporate shill who drinks a nice steaming mug of RoundUp in the morning.  I'll stick with coffee, thanks.

Yes, I do accept climate change, because I am capable of reading and understanding a scientific paper and also do not think that because something is inconvenient to American economic expediency, it must not be true.  I'd rather that the US economy doesn't collapse, mainly because I live here, but I'd also like my grandchildren to be born on a planet that is habitable in the long term.

And finally: yes, I am white. You got me there.  If I had any thought of denying it, it was put to rest when I did a 23 & Me test and found out that I'm... white.  My ancestry is nearly all from western Europe, unsurprising given that three of my grandparents were of French descent and one of Scottish descent.  But my being white doesn't mean that I always have to place the concerns of other white people first, or fear people who aren't white, or pass laws making sure that America stays white.  For one thing, it'd be a little hypocritical if I demanded that everyone in the US speak English, given that my mother and three of my grandparents spoke French as their first language; and trust me when I say that I would have loved my kids to learn Arabic in school.  The more other cultures you learn about in school, the better, largely because it's hard to hate people when you realize that they're human, just like you are.

So anyway.  Nice try telling me who I am, but you got a good many of the details wrong.  Inevitable, I suppose, when it's a self-portrait drawn by someone else.  Next time, maybe you should try engaging the people you disagree with in dialogue, rather than ridiculing, demeaning, dismissing, or condescending to them.  It's in general a nicer way to live, and who knows?  Maybe you'll learn something.

And if you want to know anything about me, just ask rather than making assumptions.  It's not like I'm shy about telling people what I think.  Kind of hiding in plain sight, here.
Posted by Gordon Bonnet at 2:10 AM