I told myself that I wasn't going to write about Roy Moore, the Republican candidate in the special election for Jeff Sessions's Senate seat in Alabama.  There didn't seem to be much to say.  Moore is, to put it bluntly, a raging bigot, only one example of which is his refusal to follow Alabama's non-discrimination rule with respect to same-sex marriage that got him suspended from the Alabama Supreme Court in May of last year.

But by now all of you know that bigotry isn't Moore's only problem.  In the last week, Moore has faced an accusation by five different women that he approached them for sex when he was in his thirties and they were all under 18.  (The youngest was 14.)  So to put in bluntly, Moore's been accused of pedophilia.

First, there was conservative talk show host and former Illinois Representative Joe Walsh, who tweeted, "Roy Moore should stay in, stand strong, and fight hard against these allegations.  Oh...and he should ignore all these spineless Republicans hiding under their beds because of a 38 yr old accusation."  He later softened this to imply that all he was saying was that Moore deserved due process and "the voters of Alabama should decide."  But you know that wouldn't have been the message had Moore been a Democrat.

Even more blatant was (unsurprisingly) Ann Coulter, who has been doing nothing but tweeting about Moore.  As a couple of the more pointed examples, we had, "As an Alabaman said on @chucktodd yesterday, right now, all that matters is that Roy Moore will vote for a wall.  Luther Strange wouldn't & the Dem definitely won't."  Because "the wall" evidently supersedes any consideration of following the laws about age of consent and statutory rape.  But when that got her some backlash, she responded, "Hey Dems!  JFK had an extra marital affair with 19-year old Mimi Alford when he was 45 years old."

I just have two things to say about this:
Then there was Jim Zeigler, Alabama State Auditor, who said that his biblical values gave him no basis for saying that Moore's alleged affairs were wrong:

So now pedophilia is okay because all it means is that your underage girlfriend might give birth to a prophet, or failing that, the Second Coming of Christ.

Then Breitbart got involved.  Two reporters for the far-right media outlet were dispatched, by none other than Steve Bannon, to try to find information to discredit the accusers.  Never mind that the five accusers did not know each other prior to this, and given the backlash that women inevitably have to face when they make allegations of sexual abuse public, they had every reason to keep silent.  (Which itself is a pretty horrifying indictment of the way women are treated in our culture.)

Nothing, however, made me gag quite as much as the reaction of ordinary Alabama voters to the Moore accusations, particularly the people who said they'd vote for Moore even if they knew for certain the allegations were true.  Consider this one: 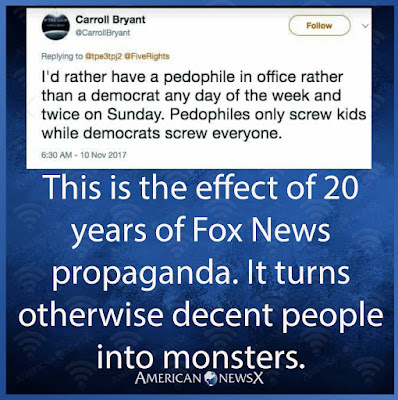 Then, there was the poll in which we find out that 37% of Alabama evangelicals said they were more likely to vote for Moore after the accusations than before.  Because, you know, the media lies.  All of them, all the time.

Except for Fox and Breitbart.  They tell the truth.

Oh, and Sean Hannity.  Roy Moore appeared on Hannity's show, where he said, "This is a completely manufactured story meant to defrock this campaign.  They don’t want to acknowledge that there is a God.  And we have refused to debate them because of their very liberal stance on transgenderism."

Evidently Moore doesn't know the definition of "defrock," but we'll let that slide.  More interesting is that Hannity clearly believes Moore and thinks all five of his accusers are lying.  As a result, Hannity began to hemorrhage sponsors, including coffee-maker company Keurig.  But when Keurig made the announcement, you know what the response was?

A whole bunch of conservatives announced they were going to destroy their Keurig coffee makers, Office Space-style.  As for Hannity, he said he was going to buy five hundred new coffee makers of a different brand for people who would video themselves smashing their Keurigs and post it on Twitter.  First come, first serve.

Let me make this clear: these people are destroying their coffee makers as a protest against a company that doesn't want to sponsor someone who defends pedophilia.

I'm afraid I have to agree with Alabaman Kate Messervy, who is a volunteer for the campaign of Doug Jones, Moore's opponent.  Messervy said, "Trump is president.  Nope, this won’t change Republicans’ minds.  Grabbing women by the pussy didn’t sway votes.  This won’t sway anyone."

What I keep coming back to is that this is not a conflict over political ideals.  This is a conflict over morality and decency, with the party that used to call itself the "Family Values Party" largely coming down on the side of an accused pedophile (and, in some cases, declaring that they would vote for him even if the accusations proved true).  This is the determination of people to vote for an individual who has "R" next to his name on the ballot regardless of any other considerations.

It is, to put it simple, hypocrisy on parade.  Many of these same people are horrified at the idea of two consenting adults of the same gender having sex in the privacy of their own homes.  Even more telling is the argument they made regarding why transgender people should be blocked from using the bathroom for the gender they identify with.  "What's to stop grown men coming into the ladies' room and molesting your daughters?", they said.

I grew up in the Deep South, and my parents were both staunch Republicans.  And I know they would have been appalled at the accusations swirling around Moore's candidacy.  What has happened in those intervening years?  We have a cadre of talk show hosts and right wing activists who are training the rank-and-file to disbelieve anything in the media unless it aligns with conservative talking points.  Everything else, they say, is a liberal hit job, a smear campaign, or outright lies.

And it's worked.  Hell, they even fell for the claim that Hillary Clinton was running a child trafficking ring from the basement of a pizza parlor that doesn't have a basement.

The bottom line is that moral, decent conservatives -- and I know a good many of them -- need to stand up and say, "Enough."  I'm heartened by the fact that some have -- as just two examples, Mitt Romney, and amazingly enough, Mitch McConnell, have called for Moore to step down.  And this is what it takes.  It's not enough for the liberals to decry what's going on; the moral roots of the Republican party need to draw together and purge the party of screeching, we're-always-right bloviators like Ann Coulter and Sean Hannity.  The propaganda campaign by Fox and Breitbart will continue to be successful -- and we'll continue to have amoral individuals like Moore and (it must be said) Donald Trump elected to office -- until the conservatives themselves decide they're done, and put a stop to it.
Posted by Gordon Bonnet at 2:07 AM