Let's do the time warp

I find it fascinating, and frequently a bit dismaying, the range that exists in what people consider "sufficient evidence."

There are us hardcore skeptics, who basically say, "Incontrovertible hard data, right in front of my face, and sometimes not even that."  It then runs the whole spectrum down to people who basically have the attitude, "if my mother's first cousin's sister-in-law's gardener's grandma says she remembers seeing it one time, that's good enough for me, especially if it confirms my preconceived beliefs."

I saw a good example of the latter yesterday over at Mysterious Universe in an article by Brett Tingley entitled, "Researcher Discovers Time Warp Near Las Vegas."  Tingley, to his credit, treated the whole thing with a scornful attitude, which (when you hear the story) you'll see was fully warranted.

Turns out "noted paranormal researcher" Joshua Warren, whose name you might know from his television work (some of his finer achievements are Aliens on the Moon: The Truth Exposed!, Weird or What?, Inside the Church of Satan, Possessed Possessions, and -- I shit you not -- Inbred Rednecks), claims to have found a spot north of Vegas where he says that time is running slower than in the surrounding areas.

Okay, let me just state up front that I have a degree in physics.  I certainly wasn't God's gift to the physics department by any stretch, but I did complete my degree.  (I didn't graduate summa cum laude, or anything.  More persona non grata.  But still.)  I bring this up only to say that with all due modesty, I have more knowledge of physics than the average dude off the street.  And I know that because of Einstein's General Theory of Relativity, there are just two ways to get time to slow down locally; (1) go really really fast; or (2) get close to a powerful gravitational field, such as a black hole.  Even the Earth's gravitational field, huge as it seems to us, causes a time dilation effect so small that it took years simply for physicists to be able to measure it and confirm it exists.  (For reference; your clock here on the surface of the Earth ticks more slowly, compared to a satellite orbiting at 20,000 kilometers, by a factor of 1 in 10,000,000,000.  So being here on Earth is not exactly the answer to lengthening human lifespan.) 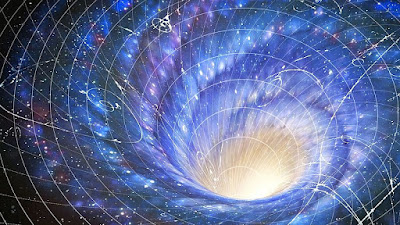 So the whole story is pretty fishy right from the get-go.  But Warren thinks he's proved it.  Here's what he has to say:


At this spot, on June 18 of 2018, I actually measured for the first and only time, time itself slowing down for 20 microseconds.  The weird thing, the real holy grail here, was what we picked up with this brand-new piece of technology.  That signal is always supposed to travel at the same rate of time at any particular place.  The only way that could change is if a black hole approached Earth or something like that, which is never supposed to happen.

You could substitute "never supposed to happen" with "hasn't happened," or "almost certainly never will happen," or "we'd all be fucked sideways if it did happen."  Now, twenty microseconds may not seem like very much, but that kind of discrepancy is not only many orders of magnitude greater than any expected relativistic time dilation effect, it is also well within the range of what would be easily measurable by good scientific equipment.  (Cf. the previous example of the physicists measuring a one-part-in-ten-billion slowdown.)  In other words, if this were real, it not only would be bizarre that it hadn't already been discovered, it would be simple to confirm -- or refute.

But here's the kicker: Warren is basing his amazing, groundbreaking, "holy grail" discovery on...

... one measurement with one piece of equipment.

The equipment itself sounds a little suspicious to me.  It's called a "DT Meter," and no, in this context, "DT" doesn't stand for "delirium tremens," although it might as well.  It's a "differential time meter," and here's how Brett Tingley describes it:


KVVU-TV in Las Vegas reports that Warren made the discovery using a gizmo called a DT Meter, or differential time rate mater.  Warren says the device was created by a Silicon Valley engineer named Ron Heath, who has no discernible presence on the internet.  The device apparently consists of a 100-foot cable with a sensor on one end.  The device sends a signal down the length of the cable and measures the time it takes to reach the other end; theoretically, the device can detect small perturbations or differences in the speed of time itself.

Now, I ask you, which is more likely: that (1) there's a spot in Nevada where time runs slowly, for no apparent reason, or (2) Warren and Heath's gizmo has a glitch?

Of course, that's not slowing down Warren one iota.  He says that the time warp he discovered is the explanation for all sorts of other things for which he conveniently has no proof:


I think it’s really interesting when you consider that this site where we got this reading, showing this time anomaly, also happens to be one of the most popular UFO hotspots in the area.  The big question at this point is not whether or not we have these anomalies, but what’s causing them?  Is this something natural that gives us a window a gateway into another world or another level of reality?  Or is this the byproduct of some kind of weird technology, be it something secret and man-made or something that’s extraterrestrial?

So the "big question" is not whether the anomaly exists?  I think that's a pretty big question, myself.  But no, we're supposed not only to believe his time warp, but that his time warp explains UFO sightings, and is caused by gateways into another world, etc.

What's baffling is that there are lots of people who apparently find this line of... um... well, I can't call it reasoning...  this line of baloney convincing.   Poking about on the interwebz for about ten minutes found lots of places this "discovery" has been posted, mostly by people claiming either that ha-ha, this proves those dumb old physicists are wrong about everything, or that there's clearly a coverup by the government to prevent us from finding out about it, and thank heaven for Joshua Warren bravely posting this online, or even that we should watch this spot closely because it's likely to be where the alien invasion of Earth starts.

All of which left me weeping quietly and smacking my forehead on the keyboard.

Anyhow.  Like I said, I'm glad Tingley scoffed at Warren's claim, because Warren is not even within hailing distance of what anyone with a background in science would find convincing.  But I'd better wrap this up, because for some odd reason I feel like I'm running short on time.