Notes from the multidimensional realm

In today's episode of Missives From Insane People Who Still Somehow Get A National Platform, we have: Paul McGuire, self-styled "End Times author," who appeared last week on the Jim Bakker Show.

It bears mention that Bakker himself is nuttier than squirrel shit.  Bakker, you may remember, is the one who predicted a couple of years ago that we atheists were imminent to start publicly beheading Christians.  As of right now, my total is a shameful Zero Christians Beheaded, which either means Bakker is a fucking loon or else I'm way behind on my Decapitation Quota.

Then, last year, Bakker railed against liberals for "blaspheming against Donald Trump."  Direct quote, that, despite the fact that the Merriam-Webster Dictionary of English says that "blaspheme" means "to speak irreverently about God or sacred things."  Which elevates Trump just slightly beyond his station.  Oh, and if that weren't enough, Bakker's also the one who claimed that the U. S. government was being run by witches.

So it's not like Bakker himself is exactly a pinnacle of normality.  But his guest, Paul McGuire, makes Bakker look like Mr. Sane Rationality 2018 by comparison.

Although it bears mention that Bakker treated everything McGuire said as if it were revealed truth, so maybe they're not that far apart after all.

In any case, here's what McGuire had to say:


President Trump is currently engulfed in the greatest spiritual battle in the history of all mankind...   The physical battles that we see in our world and nation right now are a direct manifestation of the spiritual battles going on in the invisible realm...  There are people very high up in what is called the globalist occult or globalist Luciferian rulership system, and this rulership system consists of what used to be called the Pharaoh-God Kings, it’s what Aldous Huxley called "The Scientific Dictatorship," and these are advanced beings who know how to tap into supernatural multidimensional power and integrate it with science, technology, and economics.

The highest level of the pyramidic organizational structure in which the highest ranking officers, if you will, of the New World Order and Mystery Babylon are ruling the earth through an organizational structure that looks like the pyramid on the back of the U.S. dollar.  And they control the world because they understand that the true control of the world is done through supernatural mechanisms.

You know, I have to admit that if I were a Luciferian multidimensional being in charge of Mystery Babylon, I would definitely use my supernatural Pyramid Powers to smite the shit out of Donald Trump.  It may seem petty of me, and there are probably more worthy targets, but I'd love to use occult magic to seal his mouth shut.  Or make it so every time he tweets, no matter what he writes, it comes out "I [heart] the New World Order."  Or attach a thousand-watt LED to his forehead that lights up every time he tells a lie.

Of course, it'd be lit so often that it'd interfere with air traffic.  So that'd be bad. 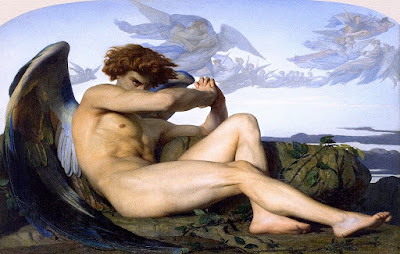 Looks like Lucifer has been hitting the gym lately.  (Fallen Angel, Alexandre Cabanel, 1847) [Image is in the Public Domain]

But what strikes me about McGuire's claim is that despite all of his dire warnings... nothing is happening.  Trump is still in office, his toadies in Congress are looking like they've greased the rails for Brett "Documents Withheld" Kavanaugh to be appointed to the Supreme Court, and the administration as a whole has undone decades of progress on environmental and social issues without anyone being able to stop them, or even slow them down.  So if there really are Luciferian multidimensional beings, I would be really glad if they'd get off their asses and do something about this.  Because it's increasingly looking like we've invented time travel, and transported the entire nation back to 1830.

In any case, that's the view from the lunatic fringe for today.  Now, y'all'll have to excuse me, because I'm late for a meeting of the Pyramidic Organizational Structure.  I hope one of the other Invisible Realm Operatives brings donuts.