Besides the not-particularly-earthshattering conclusion that I'm mostly French, Scottish, German, and Dutch, I was amused to find that the test showed I have 284 Neanderthal markers.  This puts me in the 60th percentile as compared to the population overall, which probably explains why I like my steaks rare and run around half naked when the weather is warm.

What's fascinating is that some research released last week, a paper in Cell by David Enard of the University of Arizona and Dmitri A. Petrov of Stanford University called, "Evidence that RNA Viruses Drove Adaptive Introgression between Neanderthals and Modern Humans," has shown that some of these genes didn't get passed along the usual way, but by a process called transduction -- when viruses transmitted from one host to another carry novel genes with them.

Recent advances in the detection of introgression have led to the discovery that the majority of genomic segments initially introgressed from Neanderthals to modern humans were rapidly removed by purifying selection.  Harris and Nielsen (2016) estimated that the proportion of Neanderthal ancestry in modern human genomes rapidly fell from ∼10% to the current levels of 2%–3% in modern Asians and Europeans.
This history of interbreeding and purifying selection against IS raises several important questions. First, among the introgressed sequences that were ultimately retained, can we detect which sequences persisted by chance because they were not as deleterious or not deleterious at all to the recipient species, and which persisted not despite natural selection but because of it—that is, which IS increased in frequency due to positive selection?  If any of the introgressed sequences were indeed driven into the recipient species due to positive selection, can we determine which pressures in the environment drove this adaptation?

Recently we found that proteins that interact with viruses (virus-interacting proteins [VIPs]) evolve under both stronger purifying selection and tend to adapt at much higher rates compared to similar proteins that do not interact with viruses.  We estimated that interactions with viruses accounted for ∼30% of protein adaptation in the human lineage.   Because viruses appear to have driven so much adaptation in the human lineage, and because it is plausible that when Neanderthals and modern humans interbred they also exchanged viruses either directly by contact or via their shared environment, we hypothesized that some introgressed sequences might have provided a measure of protection against the exchanged viruses and were driven into the recipient species by positive directional selection.  Consistent with this model, several cases of likely adaptive introgression from Neanderthals to modern humans involve immune genes that are specialized to deal with pathogens including viruses.

Which is amazingly cool.  Viruses are parasites, and as such usually wreak havoc with our systems, but here we have viruses acting as carriers not only for genes that generate diversity, but that protect our cells from the damage viruses can cause. 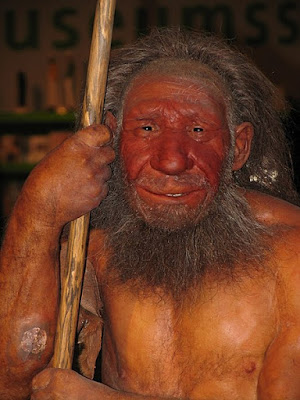 "It's not a stretch to imagine that when modern humans met up with Neanderthals, they infected each other with pathogens that came from their respective environments," lead author David Enard said.  "By interbreeding with each other, they also passed along genetic adaptations to cope with some of those pathogens."

"Many Neanderthal sequences have been lost in modern humans, but some stayed and appear to have quickly increased to high frequencies at the time of contact, suggestive of their selective benefits at that time," Petrov said.  "Our research aims to understand why that was the case.  We believe that resistance to specific RNA viruses provided by these Neanderthal sequences was likely a big part of the reason for their selective benefits."

"One of the things that population geneticists have wondered about is why we have maintained these stretches of Neanderthal DNA in our own genomes," Enard added.  "This study suggests that one of the roles of those genes was to provide us with some protection against pathogens as we moved into new environments."

So having Neanderthal DNA isn't something to be ashamed of.  All of this highlights how incredibly cool the evolutionary model is, and the depth of its explanatory power.  Now, y'all'll have to excuse me.  I'm going to go get a snack.  I wonder if I have any roast mammoth left in the fridge?  Probably not.  I guess grilled cheese will have to do.