The idea of human clones has been a staple of science fiction for decades.  Whenever the topic comes up, the question is always whether it's even theoretically possible to clone a person.

The answer seems to be "yes, but."  Embryonic cloning -- splitting a blastula (an early stage of embryonic development) into pieces, and allowing the pieces to regrow into a full embryo -- is relatively straightforward.  There's no scientific reason that someone couldn't take a human blastula, cut it into twenty pieces, and when they've regrown sufficiently implant them in the uteruses of twenty different surrogate women -- and nine months later, if all goes well, you'd have identical twenty-tuplets, all born to different women.

Much trickier is adult-tissue cloning, which is the more common one to see in science fiction; taking a sample of tissue from an adult, and somehow transforming it into a zygote, and ultimately, an embryo. The reasons why this is hard are not fully understood, but seem to have something to do with the switching on and off of developmental genes, something that has to happen with great precision in order to generate a fully functional, anatomically normal child.  So to make this work, you have to be able to reset all those switches back to their (so to speak) factory specifications -- return them to where they were when the embryo was still an undifferentiated ball of cells.

For reasons still not known, this appears to be more easily doable in some organisms than others.  The first adult-tissue clone was the famous Dolly the Sheep, who was born back in 1996.  Dolly died at age six -- about half the age of a normal sheep -- which scientists initially thought was because of accelerated aging (that her cells retained a "memory" of the age of the sheep from which they were taken).  Later experiments called this into question, and the jury's still out on whether clones would age faster, and presumably, die younger. 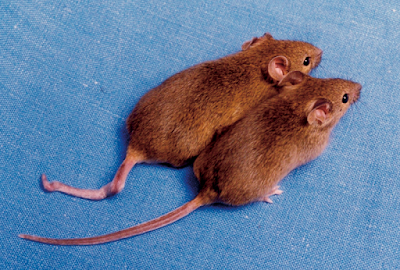 So far, the list of animals that have been adult-tissue cloned is a curious one.  You can take a look at the complete list as of the time of this writing, but it includes a bunch of not-very-closely-related species -- frogs, rabbits, rats, monkeys (two species, in fact), mules, coyotes, both cats and dogs, and camels.

Which makes it doubly odd that a rapper who goes by the moniker "Lil Buu" claims not only to be a clone, but a "second-generation clone," whatever that means.  On a television interview, Lil Buu said:


I was cloned by clonaid in Canada, my model number is 0112568…  A lot of the memories from Clonaid were erased so that way the new gen can move forward with whatever new programming was made….  They can remove a fragment of bone that’s located here [points to forehead, in between his eyes], and in this fragment of bone it stores all of your memories and consciousness, and with that, they can make a sufficient replica of yourself, a reproductive version of you including your memories, and you can be selective as to which ones you keep and don’t keep.  This process has been around for quite some time.

Immediately I read about Clonaid, that made my eyebrows rise even further.   I don't know if that name is familiar to you, but it certainly was to me; this is the group that back in 2002 claimed they'd overseen the production of the first human clone (a girl nicknamed "Eve"), but then refused to provide scientists with any proof, or in fact any evidence at all.  Then it turned out that the spokesperson for Clonaid who was said to be the chief scientist in charge of the project, Brigitte Boisselier, is a high-ranking Raëlian -- a French-based religion, founded by ex-race-car-driver turned prophet Claude Maurice Marcel Vorilhon, that believes humans were created by a race of extraterrestrials called Elohim, and to gain enlightenment we need to run around having lots of sex with any willing individuals, and wear no clothes whenever possible.

I'm not making any of this up.

Oh, and they have a temple in Japan called "Korindo," are working on establishing an "Embassy for Extraterrestrials," and their symbol is a swastika superimposed on a Star of David.

For the record, I didn't make that up, either.

So I'm perhaps to be forgiven for being dubious about Lil Buu (or model #0112568, as the case may be) and his claim to be a cloned from a memory-containing bone fragment, who was produced by a company whose leaders believe we're actually the creation of super-intelligent aliens, which was dreamed up by a guy whose primary other claim to fame is knowing a lot about race cars.

In fact, I'm dubious in general about the potential for human cloning.  It raises some serious ethical issues, and (after all) we haven't even resolved the ethical issues surrounding stem cell research and cloning non-human animals, so it's premature to leap headlong into this.

It also brings up the question about why anyone would want to clone themselves.  It's not like the clone would have your memories (whatever Lil Buu says to the contrary); our personalities are shaped not only by our genes but by our environment, so while you'd expect some similarities, they would be no more alike than ordinary identical twins -- who are, after all, natural clones themselves.

Plus, I just think it'd be creepy for there to be another me walking around, one who would be (if he was created as an embryo today) 59 years younger than I am by the time he's born.  I'm perfectly happy being a one-off.  My general feeling is that one of me is plenty.