In yesterday's post, we looked at a gentleman who decided that founding his own church was the best approach to finding out if we're all in a giant computer simulation, and (if so) getting ourselves out of it.  Today, we hear about some people who think that the solution to the Fermi Paradox is that we're in an intergalactic petting zoo.

Regular readers of Skeptophilia may recall that last year, I wrote a post on the Fermi Paradox, which can be summarized as the following question: if life is common in the universe, where is everyone?  The upshot of it is that the likeliest answers are summarized as the "Three Fs":
In 1973, astronomer John Ball of MIT proposed a fourth solution, which unfortunately admits of no easy moniker starting with "F" -- that we haven't been contacted by an ultra-advanced civilization because they're protecting us for some reason.

This was nicknamed the "Cosmic Zoo Hypothesis," and not much was done with it because it was pretty clearly an untestable claim, thus falling into what physicist Wolfgang Pauli labeled as "not even wrong."  But now, a group of astronomers have met at the Cité des Sciences et de l’Industrie in Paris, attending a conference called METI -- Messaging Extraterrestrial Intelligence -- and are considering the implications of Ball's idea, and how we might figure out if it's the truth.

"Perhaps extraterrestrials are watching humans on Earth, much like we watch animals in a zoo," said Douglas Vakoch, president of METI.  "How can we get the galactic zookeepers to reveal themselves?...  If we went to a zoo and suddenly a zebra turned toward us, looked us in the eye, and started pounding out a series of prime numbers with its hoof, that would establish a radically different relationship between us and the zebra, and we would feel compelled to respond."

At least after we checked to make sure that no one slipped some acid into our morning coffee.

Vakoch, however, is completely serious.  "We can do the same with extraterrestrials by transmitting powerful, intentional, information-rich radio signals to nearby stars." 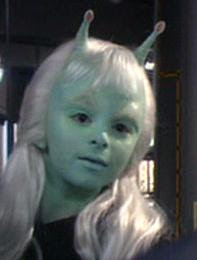 What this implies is that the super-intelligent aliens are benevolently watching over us and letting us evolve in our own way, reminiscent of the aliens in 2001: A Space Odyssey and, more prosaically, the Prime Directive in Star Trek, which was strictly enforced except for when Captain Kirk got horny and had a quick shag with any green-skinned alien women who happened to be nearby.  "It seems likely that extraterrestrials are imposing a ‘galactic quarantine’ because they realize it would be culturally disruptive for us to learn about them," said Jean-Pierre Rospars, the honorary research director at the Institut National de la Recherche Agronomique.  "Cognitive evolution on Earth shows random features while also following predictable paths... we can expect the repeated, independent emergence of intelligent species in the universe, and we should expect to see more or less similar forms of intelligence everywhere, under favorable conditions."

Which, if true, is pretty cool.  I love the idea that there are kindly aliens out there who have our best interests in mind, even if I would appear to them to be pretty primitive.  "There’s no reason to think that humans have reached the highest cognitive level possible," Rospars added, which I also find encouraging.  If Donald Trump represents the pinnacle of humanity, IQ-wise, I think I'm ready to give up now.

Of course, there's no guarantee that if there are benevolent alien overlords, they have anything biologically in common with Homo sapiens, or, indeed, any terrestrial life form.  "The environment on an exoplanet will impose its own rules," said Roland Lehoucq, an astrophysicist who works at the Commissariat à l’Énergie Atomique (CEA).  "There is no trend in biological evolution: the huge range of various morphologies observed on Earth renders any exobiological speculation improbable, at least for macroscopic ‘complex’ life."

Which also makes it unlikely that Captain Kirk will be successful in his hookup attempts.  The chance that any alien he runs into will have orifices even close to aligned with what he's looking for is nearly zero.  And even less likely is the possibility of hybridization, so Spock, Deanna Troi, and B'Elanna Torres are kind of out of the question.

In any case, it's certainly a more cheerful solution to the Fermi Paradox than the Three Fs, especially the third one.  And given how much bad news we've been bombarded with lately, I'll take it.  So if our cosmic zookeepers are readers of Skeptophilia, allow me to say: Thanks.  I appreciate your concern.  But if you could beam up Trump, and while you're at it Mitch McConnell and Lindsay Graham, I know a lot of Americans who would be willing to overlook the fact that it breaks the Intergalactic Non-Interference Treaty.